Black Snow: Curtis LeMay, the Firebombing of Tokyo, and the Road to the Atomic Bomb

Making war on civilians in the pursuit of peace. 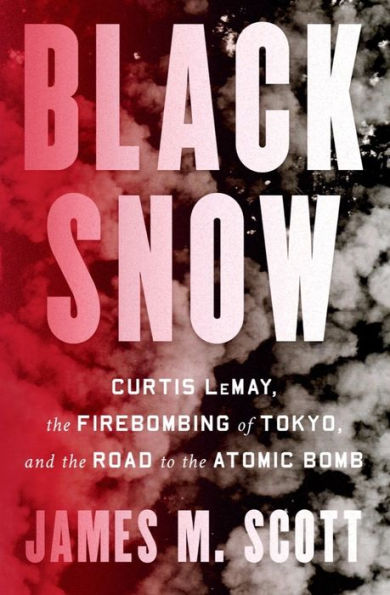 On the night of March 9-10, 1945, the skies over Tokyo glistened from the aluminum fuselages of nearly 300 American B-29 Superfortresses, the single most expensive aircraft developed during World War II. Inside the bellies of the hulking planes were hundreds of incendiary bombs designed to destroy the city’s population centers. Tokyo’s civilian building infrastructure comprised mostly wood and paper homes. It was a tinderbox.

The architect of the mission was 38-year-old Brigadier General Curtis LeMay, who said of the raid, “If we lose the war, we’ll be tried as war criminals.” The overnight attack killed more than 100,000 people in a firestorm that reached 2,800 degrees Fahrenheit. Author James M. Scott spares none of the gory details in Black Snow, his engrossing, carefully constructed account of the mission and its aftermath. The book is gut wrenching and — without explicitly saying so — challenges the notion of American exceptionalism.

Readers are given the full backstory as to how and why American military planners shifted from using high-precision bombs against Japanese military targets to indiscriminately incinerating families in their beds. In effect, the idea was to destroy Japan’s morale and force that nation to end a war it clearly couldn’t win. Secondarily, planners hoped the mission’s success would demonstrate the need for the creation of a new military branch, the U.S. Air Force.

Brigadier General Haywood “Possum” Hansell Jr. was the initial commander of the Army Air Forces’ (as it was called then) 21st Bomber Command. Stationed in the Mariana Islands, the 21st was closest to Japan and thus the unit best able to reach high-value targets, military or not. For ethical reasons, Hansell opposed the intentional bombing of civilians. “The idea of killing thousands of men, women, and children was basically repugnant to American mores,” he’d once written.

The bombing of military targets, of course, was another matter. Despite repeated poundings from the air, however, the Allies seemed to make no progress in breaking Japan. Military brass in Washington, DC, decided what was needed was a change in command; Hansell was out. In his place came LeMay, a devotee of Giulio Douhet, an Italian general and author of the 1921 treatise The Command of the Air. Wrote Douhet:

“To conquer the command of the air means victory; to be beaten in the air means defeat and acceptance of whatever terms the enemy may be pleased to impose.”

LeMay was determined not to be beaten in the air. Once in charge, he shifted tactics, using low-flying B-29s to knock out the enemy’s subsidiary war machine, including factories. Workers in those facilities were now acceptable targets — as were Japanese noncombatants everywhere.

The March 1945 raid that forms the core of Black Snow decimated 16 square miles of Tokyo, turning asphalt streets into molten molasses, causing buildings to implode, and vaporizing humans as they attempted to flee the fire raining down on them. Scott chronicles the horror of that night without sensationalizing it:

“The dead not only littered the ground but also clogged rivers and canals. Corpses crowded the few surviving bridges. ‘There was still a light wind blowing,’ one journalist observed, ‘and some of the bodies, reduced to ashes, were simply scattering like sand.’”

The narrative is sharpened throughout by the author’s inclusion of small, compelling details, such as how the smell of burning human flesh wafted into the bombers’ cockpits. His examination of the airmen who flew the infamous mission — and the guilt that came to haunt many of them — is telling and sorrowful.

Ultimately, Black Snow is more than the story of a horrific episode from a horrific war. It is a cautionary tale. On one side was a severely weakened Japan, whose hubris — fueled by its emperor, Hirohito — and misguided sense of invincibility caused it to believe it could defeat the Allies. On the other was the United States, which chose to engage in the large-scale slaughter of civilians — and eventually drop the atomic bomb — in the name of ending World War II. While Scott makes clear his belief that Japan had only itself to blame for what befell it, he forces all of us to ponder what is moral and what is not.

James A. Percoco is history chair at Loudoun School for Advanced Studies in Ashburn, Virginia, and the author of Summers with Lincoln: Looking for the Man in the Monuments (2008). A member of the National Teachers Hall of Fame, his current book project is Final Words: Discovering America’s Literary Legacy in the Nation’s Graveyards.