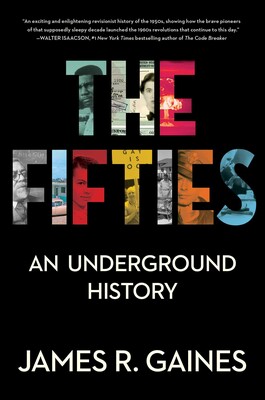 Can a decade define an era? Think of the Roaring Twenties, the Me Decade of the 1970s, the 1960s as the age of protest. Also consider the forgotten 1950s, the postwar decade of (mostly) peace and prosperity, or so it seemed for many but not all Americans. Pitted against this reassuring narrative of “the silent generation” were the dissenters, the restless subversives whose stories were largely unknown and are only now being fully recognized.

These are the main protagonists in an intriguing new book by author and former Time managing editor James R. Gaines. It is called The Fifties, but it’s more accurately about midcentury America, roughly from the 1930s into the 1960s. “An Underground History,” its subtitle, better describes its contents, as Gaines writes of countercultural heroes whose lives foreshadowed and effected changes that have brought us into the unsettling years of the new millennium.

“It was a time,” Gaines writes, “when dissent was punished and prosperity followed from compliance.” Those he portrays faced more punishment than prosperity. Theirs was often a lonely battle grounded in once-radical ideas that would become mainstream.

The author focuses his lens on four distinct but also overlapping areas: gay rights, civil rights, feminism, and ecology. The men and women who populate these chapters share some common traits. They were all deeply committed to bettering the human condition and the world, and they were willing to risk their careers, and even their lives, to achieve their goals.

Strikingly, as young progressives, many joined the Communist Party in the 1930s, when it seemed to be at the forefront of the fight for racial justice, workers’ rights, and other worthy causes. In the postwar anti-communist hysteria, they would be called disloyal and worse, but time would redeem them in evolving American thought and policies.

What especially distinguishes this modestly sized book is how it fills in what’s missing from traditional histories of the period. Most of those whose stories are told here are nowhere to be found, for instance, in David Halberstam’s 800-page doorstopper, published in 1993 and also titled The Fifties. Among the people Gaines features are Julius Waring, Frank Kameny, Norbert Wiener, Isaac Woodward, and Rachel Carson.

Carson, best known for Silent Spring, which appeared first in the New Yorker, wrote her groundbreaking bestseller about polluting pesticides as she was dying of cancer. Mostly, though, she worked for the U.S. Fish and Wildlife Service. Carson is paired here, in the “Ecology” chapter, with Norbert Wiener, an on-the-spectrum math genius at MIT who worried about the potentially catastrophic impact of science that, by ushering in the atomic age, threatened to destroy the planet.

Wiener, who worked on ballistic systems, clearly foresaw the downside of technology that would ultimately cost “millions their jobs [and] would be dehumanizing and that people would eventually be dominated by their increasingly intelligent machines.”

In “Civil Rights,” we learn about Isaac Woodward, a decorated World War II veteran who returned in uniform to segregated South Carolina. For refusing to bow to racist customs, a local police chief blinded Woodward in both eyes. The policeman was acquitted at trial, but the presiding judge, Julius Waring, subsequently ruled in favor of civil rights and eventually had to leave the South.

Black GIs who returned home and gave their lives to the cause included Medgar Evers, of the NAACP’s Mississippi chapter, fatally shot in his driveway. Fannie Lou Hamer also comes alive in The Fifties, but in the section on feminism, as a woman who rose from abject poverty to demand equality in the male-dominated civil rights movement. Gaines notes that no women were permitted to speak at the historic 1963 March on Washington, but also that Black veterans of World War II — in military formation — maintained the peace at the rally.

Intersectionality, that fraught word that links together race, class, and gender issues, entered the lexicon in the 1980s, but two of the women profiled here — Pauli Murray, a lawyer of conflicted gender, and Holocaust survivor Gerda Lerner, who taught the first women’s studies course in American higher education — were pioneers in the field. Their efforts and insights foreshadowed what was to come.

“Thanks to the people in this book and others like them, the 1960s take their place in a continuum of social progress rather than as some sudden generational cleavage,” writes Gaines, a 1969 college graduate. He continues:

“My generation had our victories too, but looking back, I cannot help feeling that people like those in this book were the more authentic rebels…In a decade and a nation perhaps readier with opprobrium than ever before, they defied the most powerful forces and conventions of their time just to be the people they were, in the country it had always promised to be.”

Thus, he concludes, “they lit a path for the rest of us to a somewhat less imperfect union, which is about the best thing any citizen can do.”

Tears Over Russia: A Search for Family and the Legacy of Ukraine’s Pogroms

The horrors playing out today have deep roots in the past.