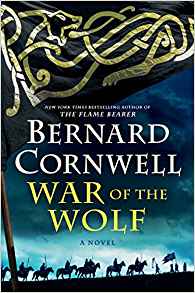 War of the Wolf is the 11th book in Bernard Cornwell’s series about Uhtred of Bebbanburg and the founding of Anglo-Saxon England. Orphaned as a young boy, Uhtred is taken as a slave by the great Danish warrior Ragnar, who eventually comes to love him as a son.

Uhtred learns the ways of the warrior from his adopted father and is initially an enemy to the Saxons, his birth people. In time, however, he returns to his roots and promises King Alfred of Wessex that he will defend the kingdom against the Danes.

At the opening of War of the Wolf, Uhtred has grown old — he’s now over 60 — but is still a formidable warrior. King Alfred is dead, as is his daughter, Æthelflaed, ruler of Mercia, as well as Uhtred’s lover and best friend. Alfred’s son, King Edward, rules England and pursues his father’s dream of bringing Northumbria under his rule. But first he must confront the Danes, who roam the untamed lands of northern England.

And, for this, he needs Uhtred’s sword.

But Uhtred has grown weary of coming to the aid of the ungrateful Wessex Saxon rulers, despite his oath to protect them. A pagan, he worships the old gods and has nothing but contempt for the Christian priests and their nailed god who would make all the world’s pleasurable pursuits sinful. Besides, he has finally retaken his ancestral home of Bebbanburg from his usurping cousin and wishes for nothing more than to remain on his lands to enjoy life.

Nevertheless, Uhtred is bound by his word, so once again, he must strap on Serpent’s Breath — his great killing sword — and fight England’s foes. For the Danes are threatening England again and they want Uhtred dead.

Cornwell, himself an adoptee and who claims to be descended from the rulers of Bebbanburg, is adept at depicting Uhtred’s conflicted loyalties to the Danes and the Saxons. Uhtred glories in the warrior pride of the Danes and would prefer to be fighting with them rather than against them. But he is also a good and honorable man — qualities the Christian priests cannot accept that he possesses because he wears a hammer of Thor amulet around his neck.

His “enemies,” the Danes, are led by the fearsome Sköll, who numbers among his army the úlfhéðnar — the wolf warriors — ferocious killers with superior fighting skills who are seemingly impervious to pain.

When tragedy strikes after Uhtred is lured away from Bebbanburg with a false summons, the stage is set for an epic journey of revenge.

Uhtred’s quest is complicated, as always, by his sense of duty toward those he’s vowed to protect, and the various ways in which their culture and religion clash with his deeply instilled Danish values and warrior upbringing. Thus, Uhtred must resolve his personal struggle between his divided loyalties while fulfilling his burning quest to revenge himself upon Sköll.

He crosses into the wild and untamed lands of northern England to discover Sköll’s formidable and imposing fortress, defended by a large contingent of úlfhéðnar. There, Uhtred questions his judgment in choosing to attack, and his ability to conquer the fortress.

On top of these doubts, he has reasons to question the loyalty of some of his own men. Most importantly, however, he fears he has lost the favor of the gods. Yet, he has committed his army and cannot turn back.

The climatic battle once again demonstrates Cornwell’s unparalleled skills at writing such scenes, and readers are assured a pulse-pounding and thrilling experience. Cornwell excels at conveying the brutality, ferocity, and sheer terror of warfare in the early Middle Ages, when warriors stood face-to-face in shield walls armed with swords, spears, and axes.

Cornwell has said that there may be two more books about Uhtred of Bebbanburg. Among longtime Cornwell readers, Uhtred has attained the same level of affection as his other renowned warrior, Richard Sharpe, of Wellington’s army. The author follows in the tradition of a long line of British adventure writers that stretches back to Scott and his Waverly tales. No one currently plowing the same field does it better than Bernard Cornwell.