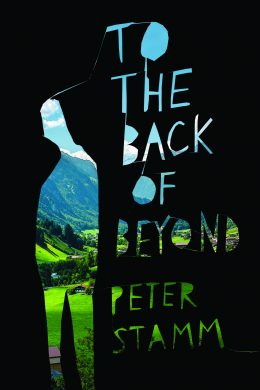 You know that discombobulated, let-down feeling you get when you come home from a fabulous vacation to your humdrum life, dreading the prospect of going back to the office the next day? In Peter Stamm’s slim novel, To the Back of Beyond, rather than resume his normal life after he and his family return to Switzerland after two weeks of holiday in Spain, Thomas walks away from it “with a bewildered smile that he was only half aware of” and never looks back.

Why does he walk away? Nobody seems sure, not him, not his wife, Astrid, not the reader. There is not a lot of interior voice in the passages that describe Thomas’ journey through the woods, valleys, and Alpine mountain peaks, just descriptions of the terrain, the villages he passes through, and the abandoned vacation homes where he spends the night. At first, he hides from people, but after he gains enough distance from his hometown, he gets odd jobs and stays in boardinghouses.

Meanwhile, Astrid, who “had always been the voice of reason in the relationship, and in the family,” copes with things at home: Making excuses for Thomas at his place of employment, explaining his absence to their two children, contacting the police to report him missing.

The narration relays between Thomas and Astrid, first describing Thomas’ wanderings, and then handing the baton off to Astrid to follow what she had been doing during the same period of time. The transition often occurs as Thomas settles down for the evening and Astrid wakes the morning of that same day: “With his feet he scraped together some dried leaves, then spread his jacket over them and lay down.

“Normally Astrid found getting up easy, but on this day, after switching off the alarm clock, she went back to sleep and only awoke when Konrad touched her gently on the shoulder and whispered, Mama are you awake?”

Each occasionally imagines, correctly, what’s happening to the other, so that the narrations begin to braid together, as when Astrid envisages a policeman stopping Thomas as he wanders the road, which then actually happens.

Eventually, though there is no body and she is sure that he is still alive, Astrid declares Thomas dead:

“Thomas had disappeared a month ago. From the very beginning, Astrid had sensed he wasn’t coming back. His death was the simplest solution; it cleared away all possible questions, removed all the issues, the reason for Thomas’ disappearance, the road he had chosen.”

Although she knows she’s not a widow, Astrid grieves deeply. The years pass, the children grow up, she never remarries. Thomas wanders ever farther, eking out a living, hitting the road whenever the weight of obligation becomes too heavy.

The straightforward exposition casts a fairytale-like spell that is occasionally marred by awkward translation, especially for the American audience, such as the use of the noun “jollies” to mean entertaining excursions, and reference to “the rush hour.”

The utter lack of authorial judgment or moralizing imparts a Zen koan feel to the novel: It is as deep or shallow as you’d like it to be. Like a koan, it is frustrating in the multitudinous ways in which it can be regarded.

Is it a parable or just the story of two emotionally detached people? Does Thomas walk away because he is so numbed by modern life that he has to go back to basic survival to feel alive? And, if so, why does Astrid acquiesce to Thomas’ abandonment by cloaking herself in the very numbness he sought to escape?

As with real life, there are no easy answers. The prose is so even-toned and mild-mannered, the story can easily slip by without making much of an impression. You get to the end of the book and feel discombobulated, wondering what the hell just happened.