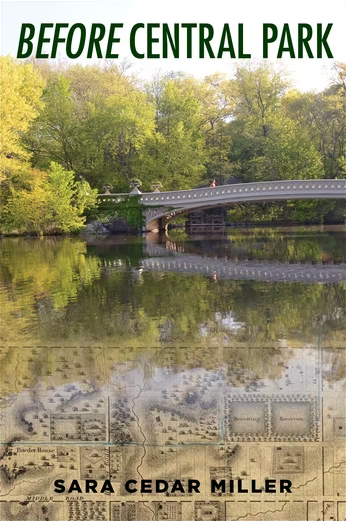 When Roy Rosenzweig and Elizabeth Blackmar published their history of Central Park, The Park and the People, almost 30 years ago, they transformed the tale of a simple oasis into a dramatic window onto the social history of a place that has changed and grown, that constantly reflects the values and conflicts, wealth and diversity of the city around it. They also opened the door to new interest and interpretation, whetting the curiosity of history buffs and park lovers alike.

Sara Cedar Miller has been a photographer for the Central Park Conservancy — the private nonprofit that holds the contract with New York City to finance and manage the park — for almost 40 years and is now the park historian emerita. In Before Central Park, she satisfies some of the curiosity Rosenzweig and Blackmar sparked, offering a comprehensive account of the pre-park history of the 843 acres that became Central Park. Her story comprises far more than the 164 years since the first sections of the park opened, however, and she tackles the organizational challenge by dividing her discussion into three sections: “Topography,” “Real Estate,” and “The Idea of a Park.”

Starting with topography gives us a picture of how completely the entire island of Manhattan has been transformed. Much of what became Central Park was considered useless wasteland by both the Indigenous Lenape people and European settlers. A “jagged terrain” with “little promise for agriculture or human habitation,” the half-mile-wide stretch that runs approximately from today’s 23rd Street to 92nd Street was considered so worthless that the Dutch and English simply declared it common land no one would miss owning.

As a result, much of Miller’s discussion centers on the rocky hills of the northern section of the park — the southern edge of what the Dutch called Haarlem. Roads and the subsequent taverns, farms, and villages were built around the easiest place to pass through these highlands; what came to be known as McGowan’s Pass, near 107th Street, had strategic importance in the battles fought on the future parkland — mainly in Kieft’s War (in which the Dutch slaughtered the Lenape) and the Revolutionary War.

Miller’s second section is driven by an 1808 commissioner’s plan that laid out Manhattan’s street grid and “transformed the island into real estate.” Still deeply in debt from the Revolution, the city could now sell small plots in the center of the island, inaugurating a speculative boom that has only occasionally cooled in the two centuries since.

While the author paints an excellent portrait of the chaos of constant land transfers driven by intermarriages and family feuds, and gives capsule biographies of some names familiar to most New Yorkers — the Delanceys, the Stilwells, the Apthorps, and the Belmonts, among others — this section often reads like a catalog of real estate transactions. Before Central Park gathers in one place a tremendous body of research, but it sometimes feels like a dry collection of facts. A greater emphasis on synthesizing and analyzing all this data would’ve made for a more powerful narrative.

Miller does provide such analysis in her discussion of Seneca Village, the most famous and controversial community lost to the park. Seneca Village was one of New York’s first communities for free Blacks, formed in the period after New York State’s gradual emancipation was finally completed in 1827. That year, John and Elizabeth Whitehead, abolitionists with strong church ties, began buying land on Manhattan’s west side and selling it to African Americans. By 1855, Seneca Village — located between 83rd and 89th streets on what would become the park’s western edge — consisted of over 55 buildings and some 260 residents. There were also several churches and a school.

This community offered Black people security and stability at a time when both were in short supply. Land ownership was a prerequisite for voting in New York State; though white men could vote if they owned just $25 in property, the 1825 state constitution raised the property requirement for Black men to $250. Thus, having a community where land ownership was possible had political ramifications. In some years, fully 25 percent of the Black vote in New York City came from Seneca landowners.

Surprisingly, at a time when integration was rare, almost half the residents of Seneca Village were German and Irish immigrants. The famous Tammany Hall politician — and coiner of the term “honest graft” — George Washington Plunkitt grew up in Seneca Village. Many of its residents, both Black and white, were renters who lived off growing vegetables and manual labor.

Miller documents how landowners were well compensated when the city seized their property, via eminent domain, to build Central Park and how some Seneca Villagers became wealthy as a result. Nonetheless, the sense of community and the security afforded by the political participation the village ensured were not easily replaced. And the majority of village residents, who were merely renters, got nothing. Farmers and gardeners were granted time to gather their last harvest, but by 1857, many of their homes were occupied by police personnel called in to protect the newly designated parkland.

Miller’s final section narrates some of the political and economic challenges surrounding the park’s creation, including the debate around alternative sites, the corruption that hampered early financing, and the controversies over choosing Frederick Law Olmsted and Calvert Vaux as its chief designers. Although such disputes conjure the possibility of a Manhattan without Central Park, it would be impossible for many New Yorkers to imagine such a thing. Until now, it has been equally impossible to imagine the city before Central Park. Thanks to Sara Cedar Miller’s informative text, we don’t have to.