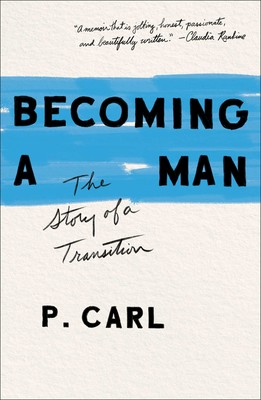 But, according to his elegant memoir, Becoming a Man: The Story of a Transition, the metamorphosis didn’t feel confirmed until he checked into a New York hotel:

“‘Good evening, sir, how are you?’ This isn’t my first ‘sir’ they have come and gone my entire life and more often in recent weeks. But it’s the start of something…this “sir” forward will be my new life.

“What changed from yesterday and the day before…What is the fine line of gender that makes me a woman one day and a man the next? Did my jawline get just square enough, my voice deep enough, did my hairline recede enough? All I know is…from March 16 [2017] forward, I am finally me. I take a selfie and send it to my wife, with a text message: ‘I’m me now…I can’t…believe it. I am finally me.’”

But his wife, Lynette, had a different perspective. She had lived with and loved Polly — now Carl — for nearly 20 years. When Polly proposed a double mastectomy to disable her transgender desires, Lynette resisted, then relented; she knew Polly felt cornered, caged, and confined — as a woman, so they compromised: only the breasts would be removed; no hormones.

“At age four, my body split. I lived two distinct lives. I aspired to everything my brothers had — little plastic green army men and tanks, short hair, little bow ties for dress up, and Boy Scout uniforms…But I lived as my mother’s daughter. She made all of my clothes — a white lace First Communion dress…another white lace dress…for junior prom…My two selves walked side by side. I couldn’t escape being her daughter…I lived most of my life in a depressed darkness — a hyper-intellectual head attached to a neurotic body. My mind always feels male.”

Still, despite the tempestuous times, she had composed a significant, seesaw life. Emotionally ambidextrous, Polly was — in some circles — perceived as a dazzling professor, a comet of creativity in the theater, a straightforward social activist. In others, she was a partially possessed psychotic; trampled, torn up, and trapped by anxiety, over-the-top outbursts, and botched suicide attempts that climaxed in hospitalizations.

After the mastectomy, Polly’s hankering still hummed and heated up. Then, in 2013, the human resources department at her college informed her that transgender surgeries were covered by insurance. Polly immediately pressed Lynette for her sanction — to intercept a despair that was about to detonate:

“Doors opened and I fell through them. There was no plan, no choosing, just surviving from one moment of the transition to the next…I never thought about losing her, just finding him.”

Meanwhile, during Polly’s sex reassignment, Lynette roasted with rage and pinged him in protest: “Your transition tore my skin off. I wish we had separated the minute you started taking testosterone.”

Lynette grieved the loss — the death — of Polly, deeply. Once, in a fevered frenzy that fell flat, Lynette tried to recapture her by flicking through their wedding album and their voluminous collections of photographs from their trips to Italy, Ireland, Tasmania, and Japan, but there was no rush in receiving relief.

Polly had tried to push away clingy Carl for a half-century, but she couldn’t dodge him. But, now, Polly has been subsumed, and Carl has — finally — risen:

“I love being a man. I love learning from good men. I have enormous hope for boys who wear sparkles and maybe decide they are not boys, and boys who jump on trampolines, and boys in high school with no work…and trans men who want to climb mountains.”

And, with his plethora of peers — Lee, Walter, and Alex — Carl talks about guy things like sneakers, beer and dogs; relationships, politics, and weightlifting.

Lynette’s anger has leveled. She is writing, while Carl prepares to teach at Princeton in 2020, and pursues his exploration of “how Carl and Polly make a man, how we find a language that fits.”

The Other Side of Prospect: A Story of Violence, Injustice, and the American City

The price of living on the wrong side of the tracks.