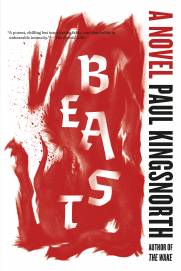 At one end of the spectrum, there are stories that are so completely plot-driven that the characters almost seem like an afterthought. They sweep you away to different worlds, pulling you out of your life and taking you on unbelievable adventures.

On the other end, there are stories so rooted in the mind of one character that the character becomes part of you, taking up residence in your brain and filtering your experiences through their lens for hours — sometimes even days — after you’ve put the book down.

Beast, the latest novel by Paul Kingsnorth, falls firmly at the latter end of that spectrum. It is a deeply philosophical novel that reads like a journal, a stream-of-consciousness account of a man, Edward Buckmaster, and his search for…well...something.

He has left his family — his partner (wife?) and their infant daughter — to “be in the places where the light comes through, where people are thin on the ground, where the old spirits still mutter in the hedges and the stone rows.”

And the something he’s looking for among the old spirits in their hedges? Much like that oft-cited, clichéd definition of pornography, he’ll know it when he sees it.

He reveres the old ascetics and hermits who left everything behind to live in seclusion and search for a better understanding of themselves or God or the truth. “Are you looking for God or looking for yourself?” he reports that his wife (we’ll call her his wife) asked him. “Can you even tell the difference anymore?”

It is not a stretch to say that I’m not a fan of Edward Buckmaster.

And yet, the story itself ended up being something I had not expected. Something happens to poor, self-centered Edward during a storm, and his world is never the same. He wakes up in the yard outside his cottage in pain, with blood on his face. He remembers nothing. Not who he is, not why he is there, not where he has come from, not what happened before.

As the story progresses, he begins to remember a small thing here, another small thing there, but these memories come alongside and amongst delusions and fantasies and dreams. They all blend together as Edward’s sanity spins away until I was left wondering if sanity was even where we had started.

This is where Kingsnorth shines. He did something similar in The Wake, the precursor to this book, and pulled it off to great effect. He tells the story of his characters’ descent into self-absorption and madness in such a way that, by the end, real and not-real are almost indistinguishable.

His characters exist at the tipping point between reality and fantasy, occupying the space where the boundary between the two can be blurred to the point that it no longer exists. The difference is, in The Wake, there were other characters who reflected his main character’s condition. In Beast, there is only Edward.

Through the second half of the book, Edward is chasing a beast. It appears first as a shadow. He becomes convinced that it’s a large black cat, and he hunts it methodically, hoping for a glimpse. It is a mystery to solve in the white, silent world he now occupies, the only other sign of life. Is it real? Perhaps. But what is real? Is there such a thing as objective reality? Or is it all just perception?

I kept waiting for an answer, some kind of trick ending that would explain everything.

But Kingsnorth is too clever for that. He is not one to provide easy answers. Or, in some cases, any answers at all. Beast is one of those books that I feel like I could read over and over and find different answers every time, different pieces of the puzzle.

It is the sort of novel that sinks in deep, making a home for itself in your psyche. Edward Buckmaster may not be my favorite fictional character, but his thoughts will be a part of my own for years to come.

Katy Bowman is a writer living near Dayton, Ohio. She has had work published at the Antioch Review Blog, Circa: A Journal of Historical Fiction, the Rumpus, Flash Me Magazine, and on the Dayton Mom-Spot website. She reviews adventure books on her own site, the Edge of Uncertainty. She also volunteers as an assistant fiction editor for the Antioch Review.

This much-anticipated follow-up novel falls far short of its predecessor.