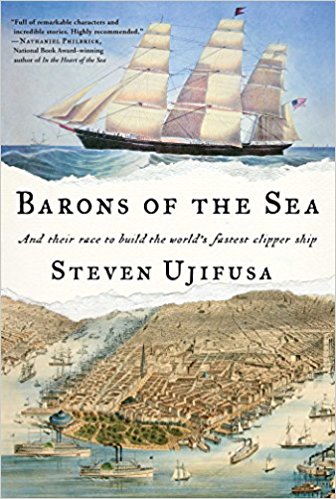 To old salts and others with strong winds in their sails, this book will be very much to their liking. Barons of the Sea is, after all, about the magnificent clipper ships that allowed the United States to become a major commercial player on the world stage in the mid-19th century. It was all about globalism — and trade winds.

Tea was the primary cargo these ships carried to the United States. But it was also opium that contributed to the country’s maritime economy while also creating an American aristocracy. These pillars of society, families with familiar surnames like Delano, Forbes, and Low, among others, grew rich in part from the opium trade, initially smuggling the stuff from India to China, and later — although to what extent is not entirely clear — to the U.S.

What is clear is that these American captains of maritime industry were at best ambivalent about their controversial cargo. They carefully omitted their opium business from their memoirs, which tended to portray them as adventurous entrepreneurs of the highest type.

It is tempting, therefore, to suggest an alternative title: Robber Barons of the Sea. But this would be unfair to them and to this book, which ranges far and wide, from the expatriate British and American colonies in Canton, to the treacherous cross winds of Cape Horn, to the Gold Rush-fevered port of San Francisco, to the quiet baronial estates along the Hudson Valley. Franklin D. Roosevelt, we learn, was the grandson of Warren Delano, prominent among the sea barons.

Author Steven Ujifusa does not shy away from inconvenient truths, laying bare the shady origins of family wealth that over generations lifted some, if not all, boats, but also gave birth to a privileged social class that was as philanthropic as it was self-serving. Seth Low, for one, built the magnificent Low Library at Columbia University, of which he was president, and served as the first mayor of the consolidated City of New York.

One wonders if the beneficiaries, spouses and offspring, knew the whole story of their inheritance, or simply imbibed the exciting sea air of family lore, filled with mythical stories of oceanic adventures, on which their fortunes were based. The first generation worked hard to accumulate wealth sufficient to live the good life. But their reign was short-lived.

What began in the 1830s along China’s Pearl River, in which Americans made agreements with Chinese trade lords, survived for just a few decades before the transcontinental railroad stole the thunder and the cargo from these “extreme clippers” whose fastest speeds could not hope to compete with the government-subsidized cross-country trains.

Ujifusa chronicles the competition among shipbuilders and ship captains to make the treacherous trips around the horns of South America and Africa to their ports of destination. These narrative chapters are among the most compelling in the book, filled with sadistic master skippers and first mates, unruly crews and the vagaries of the weather, including storms that threatened to sink vessels and doldrums that slowed their voyages to a standstill.

While never fully sanguine about their illicit cargo, the American sea barons could find some solace in the use of opium-based medication during the Civil War. Warren Delano sold opium to the U.S. government to provide pain relief for wounded soldiers. “An estimated 400,000 became opium addicts on both sides as a result of their morphine treatments,” Ujifusa writes. The addictive qualities of these prescribed meds foreshadowed today’s opioid epidemic.

The fortunes made in the importation of legal (and illegal) goods have long ago been legitimized (some might say laundered) and put to charitable uses: The Russell fortune to this day supports the Skull and Bones secret society at Yale. The elite Milton Academy in Massachusetts owes its existence to the Forbes fortune.

Warren Delano’s “competence” allowed the family to live in high style in its Algonac estate in the Hudson Valley. His daughter Sara married James Roosevelt; their only child was Franklin.

An avid stamp collector, FDR also had 200 ship models at the family’s inherited Hyde Park estate. He also served as secretary of the Navy before contracting polio and overcoming its physical effects to become governor of New York and the county’s only four-term president.

FDR was fond of quoting his maternal grandfather, Delano: “Never let your left hand know what your right hand is doing.” Was this the secret sauce that sustained the sea barons? More likely, it was this rationale, given in a letter Delano wrote home in which he insisted that the opium trade “has been fair, honorable, and legitimate.”

The early chapters are slow going, and the names of ship owners, traders, captains, and their ships tend to overwhelm. Nautical terms, such as hanging knee and top-hamper, are used extensively. An appendix with drawings and labels for ship parts helps, but it comes at the end of the book when perhaps it should have appeared at the beginning, along with a cast of characters.

Ujifusa’s writing is generally fluid, but clichés appear from time to time, as in describing Fred and Annie Delano Hitch as “blessed with deep pockets” or Yankee traders who “had in spades” a certain sangfroid. Elsewhere, the Lows “kept their eyes on the prize.”

As is traditional in boating circles, the author uses female descriptors to refer to ships as “she” or “an old lady,” perhaps a bit jarring to current readers who do not recognize gender in objects.

But these are minor criticisms. Overall, Ujifusa presents a sweeping, little-known piece of commercial history written by men willing to take risks, and occasionally work the grey areas of the law, to achieve some measure of fame and fortunes that survive to this day.

Eugene L. Meyer, a member of the board of the Independent, is a journalist and author, most recently, of Five for Freedom: The African American Soldiers in John Brown’s Army. He will read from his new book at Busboys and Poets in Washington, DC, this Thursday, Sept. 6th, at 6:30 p.m. Find details here.