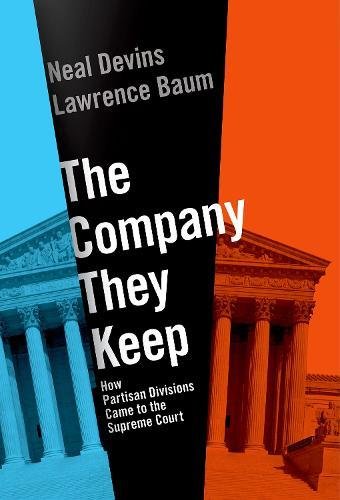 With the Supreme Court's 2017 term underway, the newly confirmed justice Neil Gorsuch went before the Federalist Society's annual banquet in Washington to thank the assembled conservatives for helping put him on the nation's highest court. Gorsuch assured his admiring audience that his hard-fought confirmation to succeed the late justice Antonin Scalia proved that a "committed originalist and textualist" could be confirmed to the Supreme Court.

Along with the newest justice, Brett Kavanaugh, Gorsuch is one of the five current Republican-appointed justices who made frequent appearances before the Federalist Society as they climbed toward the nation's highest courts. The four Democratic-appointed justices, on the other hand, have made occasional appearances before the Federalist Society's liberal counterpart, the American Constitution Society.

Supreme Court scholars Neal Devins and Lawrence Baum cite these extrajudicial appearances in a new book that seeks to answer the age-old question of what motivates justices to vote in cases they way they do. The secret to the justices' decisionmaking, according to political scientists Devins and Baum, lies quite simply, as the book's title suggests, in the company they keep.

Devins, a professor of law and government at the College of William and Mary, and Baum, professor emeritus of political science at Ohio State University, approach the justices from a theory that they describe as "rooted in social psychology." Supreme Court justices, they argue, share "the basic psychological motivation to be liked" and want to be liked in particular by the networks of social elites that they "interface with."

The argument rejects alternate theories that emphasize public opinion generally as perhaps the most important factor in Supreme Court decisionmaking. This "majoritarian" theory has been advanced recently by, among others, New York University law professor Barry Friedman and George Washington University law professor Jeffrey Rosen as an alternative to the previous view that the court was inherently a "countermajoritarian" branch of government designed to disregard and often to override public opinion.

The emphasis on general public opinion, Devins and Baum argue, is "subject to doubt" even if over time the court does plant its decisions within the broad parameters of prevailing public sentiment. On the other hand, their theory does coincide to some extent with the alternate explanation that justices base their votes on policy preferences more rooted in politics than in law.

It also coincides without endorsing the conservative critique that Republican-appointed justices such as Anthony M. Kennedy and David H. Souter "drifted" to the left over time because of what has been termed the "Greenhouse effect," an effort to curry favor with the New York Times’ longtime Supreme Court reporter Linda Greenhouse.

Devins and Baum present their theory along with a critical and insightful history of the politicization of the Supreme Court over the past half century. They note that the justices are now divided on major issues, for the first time ever, precisely along the partisan lines of their appointing presidents: Republican justices on one side, Democratic justices on the other.

The Federalist Society, founded in 1982 to counter what was seen then and still today as the predominantly liberal orientation of law school faculties and student bodies, plays a major role in the authors' subtitle account of "how partisan divisions came to the Supreme Court." The society's leaders consciously played "an instrumental role" in helping members make the connections needed to influence federal judicial appointments or climb the judicial ladder themselves.

The society has become "the only way" to be credentialed as a conservative in legal circles, as the conservative lawyer Michael Greve put it in an earlier historical account. The society's role in that regard is unique, Greve added. "On the left there are a million ways to get credentialed," he said.

For the record, Justice Ruth Bader Ginsburg often votes in line with the American Civil Liberties Union, where she headed the women's rights project in the 1970s. And Justice Sonia Sotomayor, a onetime board member of the Puerto Rico Legal Defense and Education Fund, sided with Puerto Rico in one case testing the commonwealth's legal status.

As a unified theory of Supreme Court decisionmaking, however, the Devins-Baum hypothesis proves too much. To begin, all of the decisionmaking theories are perhaps best viewed as unnecessary. Perhaps Supreme Court justices decide cases, just as they claim to do, on the basis of their best reading of the applicable law. As Elena Kagan said in her confirmation hearing, "It's law all the way down."

The Devins-Baum theory provides no explanation, for example, for Justice Stephen G. Breyer's occasional votes with conservatives on regulatory issues or, on constitutional issues, in Fourth Amendment and free-speech cases. Nor does it explain why Scalia and Justice Clarence Thomas have often voted to apply Fourth and Sixth Amendment provisions so strictly as to favor criminal defendants or suspects — surely, to the consternation, of their conservative interfaces.

Whatever the strengths or weaknesses of their theory, Devins and Baum lament the way that the increased politicization of political elites has found its way into Supreme Court chambers. "Justices now act more as adherents to one ideological side, a side increasingly identified in partisan terms, than they did for most of the court's history," they write in conclusion. "That is a consequential change."

An irresistible homage to the world of words.