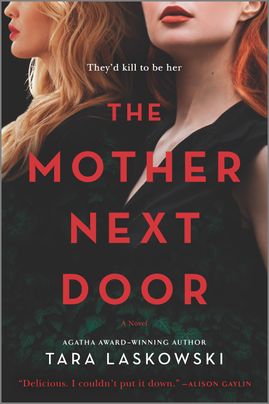 Every Halloween, the influential neighborhood clique known as the “Ivy Five” throws one killer soiree. For the posh community on Ivy Woods Drive, the annual block party is the event of the year, with creepy costumes, props, and decorations adorning the idyllic suburban dream homes as the children trick or treat and the adults get soused. For the wives and mothers of the Ivy Five, it is a badge of pride 15 years running.

Except the Ivy Five is actually four and has been for a long time…but that changes when Theresa Pressley and family move into the cul-de-sac. Intelligent, attractive, married to the newly hired Woodard High School principal, and mother to freshman Lily, Theresa checks all the boxes for a potential “fifth” to make the Ivy Five complete again.

Theresa is eager to fit into her new upper-crust environment, so different than the one she grew up in, with a mother who cleaned houses in the same neighborhood she now calls home. With a journalist’s keen eye, she quickly spots the power squad on the block and innocently asks around about the Ivy Five (or, Four).

Desperate to be accepted, she longs to host gatherings, volunteer at bake sales, chair planning committees, and wear the coveted bejeweled pin in the shape of an ivy leaf to mark her as “one of them”:

“[I’d been]…the self-conscious introvert whose mother was always pushing her to fit in despite not having the right clothes or the right hair or the right name. Who had to work twice as hard only to settle for good-enough. Starting now, starting here, those days would be over.”

But first, she must pass muster with the queen bee herself, Kendra McCaul. Unspoken leader of the Ivy Five, she is organized, driven, and relentless when it comes to getting things done. The Halloween party is her baby and has been for as long as she can remember. The other members of the exclusive group include Bettina Price (fiercely loyal), Alice Swanson (friendly but frazzled), and Pia Burman (the elder, a happy divorcee).

After winning their approval, Theresa soon falls into the Ivy Five lifestyle and is almost too busy to notice the hints of something off in the anxious looks and whispers among the others when she’s not looking.

Not long after Theresa arrives, so do anonymous messages that make Alice nervous and Bettina suspicious. To Kendra, it’s just a stupid prank someone is playing on the Five and nothing to lose sleep over…yet. Says one message:

But Daphne is dead, the source of a local urban myth known as the “Ghost Girl,” who leapt to her death from the stone bridge — a case of brokenhearted suicide. As the messages mount and reveal information no one could possibly know, Kendra fears the worst…a real ghost from the past with enough dirt on each of them to bury them six feet under.

Author Tara Laskowski’s winning formula in this spooky domestic thriller is the first-person alternating chapters told through Kendra and Theresa. The reader is pulled into an uneasy orbit of the women’s inner lives and family problems while also feeling the same uncertainty each has for the other and what they may be hiding.

Adding to the chilly vibes are the frequent creepy yet eloquent observations of an anonymous “avenger” in small chapter breaks that speak truth to the lies of these perfect people living on a perfect street in a perfect town. But this fall, things will cease to be perfect.

A smart thriller that is, dare I say it, perfect for Halloween, The Mother Next Door delivers surprising twists with effortless pacing that keeps the reader turning pages long past bedtime.

Peggy Kurkowski is a professional copywriter for a higher-education IT nonprofit association by day and major history nerd at night. She writes for several book review publications, including Publishers Weekly, Library Journal, BookBrowse Review, the Historical Novels Review, Open Letters Review, and Shelf Awareness. In addition, she is the art director for the Saber & Scroll Journal, as well as an editorial board member. Her heavy history-reading diet is spiced up with the occasional mystery or thriller, which she also reviews. She lives in Colorado with her partner (quite possibly the funniest Irish woman alive) and three adorable, ridiculous dogs.