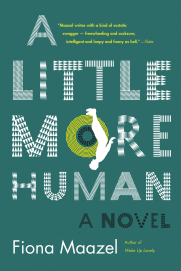 Fiona Maazel’s third novel extends into even more cacophonous territory than the cult leaders, hostages, and drug addicts of her previous novels, Woke Up Lonely and Last Last Chance.

A Little More Human, in its spiraling, fast-paced, witty prose, is stylistically reminiscent of the best of Vonnegut and Pynchon, and its humor, combined with an exploration and critique of technology, sets the story squarely in the realm of contemporary novels such as Gary Shteyngart’s Super Sad True Love Story and Charles Yu’s How to Live Safely in a Science Fictional Universe.

Maazel is perhaps the opposite of a genre purist, as she layers and constellates the conventions of science fiction, satire, noir, domestic drama, and the superhero narrative to create her own magnificent hybrid, one she’s likely able to get away with because of her undiluted prose.

The first line of the novel, “He came to on the back of a horse,” is a perfectly absurd entryway into a world where logic is constantly reconfigured. Though it may be considered trope to begin a novel with a man having lost some part of his memory, the negative connotations belie the utter pleasure of trying to piece together the puzzle within the narrative.

Phil Snyder, the novel’s protagonist, works weekdays as a nurse’s assistant at the SCET, an advanced-neuroscience laboratory on Staten Island created by his father and late mother. On weekends, he is paid to dress and act as the superhero Brainstorm, the center of a children’s toy franchise.

Ironically, Phil can, in fact, read minds, just as his character does: “It was always the same: [Phil] emptied his mind of its clutter, then ushered in what looked like a slate board, smooth and blank and ready for whatever glories wanted to alight there today. Words. Phrases. Sometimes whole paragraphs.”

Phil’s life is in disarray. His wife has betrayed him by impregnating herself with supersperm obtained by Phil’s father, Doc (Phil himself being sterile). Doc, meanwhile, is in the early throes of dementia and continues to obsess over his wife, Sarah, who has been dead for two years from mysterious causes, possibly suicide.

Most significantly, when Phil regains consciousness after a night of heavy drinking, he notices blood on his ripped superhero uniform and is soon confronted by a series of photographs suggesting he sexually assaulted an unknown woman that previous night.

The plot becomes even more convoluted when Ada Moller comes to work as Doc’s assistant, claiming interest in helping him organize his packrat of a home. Secretly, she is hoping that Doc will somehow be her key to procuring more ARA-9, a highly addictive drug produced by the SCET that Ada’s mother needs to survive.

Though such a multiplicity of plot elements may have suffered at the hands of a less-talented writer — the equivalent of an over-confident juggler dropping six or seven plates and then treading on their shards — Maazel succeeds by mapping a variety of generic concerns onto the relatively simple through-line of a mystery. But for all its complexities, the main question of the story continues to be: What happened on the night of Phil’s blackout?

As the mystery unravels, Maazel explores other salient issues, such as the dangers of advanced technology and pharmaceuticals, the pain and yearning of grief, the role of memory as a bedrock for identity, and, of course, the question of what makes us human, explored most succinctly in a Nietzsche quote Phil finds while flipping through a book: “I teach you the overman. Man is something that shall be overcome. What have you done to overcome him?”

Given his power of telepathy, Phil is frequently at odds over when to use his superhuman powers and when to let them rest. After all, there are times when we may not want to know others’ true thoughts.

There is a self-awareness here, a metafictional quality adding a humorous dimension as characters acknowledge the absurdity of their own situations. At one point, while sneaking through Doc’s house Ada attempts to calm herself: “Probably it was Jehovah’s Witnesses. Or the meter man, though she wasn’t sure the meter man even existed except as a trope for pornographers. Though maybe that was the meter maid. Oh, shut up, Ada.”

The language of the novel is funny and playful, a tool that Maazel uses to entice her reader into intricate philosophical questions about the nature of love, identity, and sacrifice.

Michelle Meyers is the author of Glass Shatters, published by She Writes Press. She is an MFA candidate in fiction at the University of Alabama.

Husband-and-wife attorneys find themselves embroiled in fraud, deceit, and murder in this descriptive but poorly plotted novel.