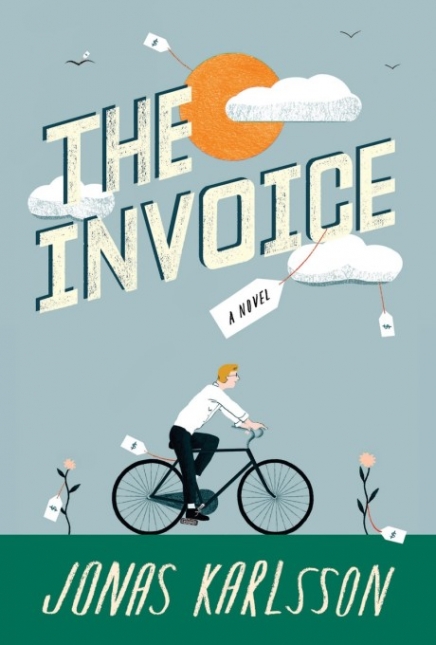 The best things in life are free — or are they? Swedish author Jonas Karlsson’s charming new novel, The Invoice, takes on this assumption. The book might more accurately be called a novelette, weighing in at a mere 208 pages, and wee ones at that — the advance copy was about 80 percent the height and width of a standard paperback.

The unusually slight form of the book prepares the reader, in a way, for the light touch and unique approach Karlsson takes with a heavy question: What is the price of happiness?

That’s the query facing our unnamed protagonist after he receives a staggeringly high bill from the World Resources Distribution (W.R.D.) agency for the simple life he’s enjoyed. The W.R.D. has been tasked with calculating the Experienced Happiness (E.H.) of every person in the world. Those who have had happier-than-average lives are required to pay into a monetary fund that will be redistributed to others in the world who have experienced less happiness.

Our protagonist, having missed all of the public-awareness campaigns leading up to this bill, is shocked not only that 1) the bill exists, but also that 2) it comes out to a whopping 5,700,000 Swedish krona (close to $700,000 American).

The sum doesn’t seem to fit. After all, the protagonist is not a fabulous millionaire, jetting around to multiple homes in paradisiacal settings. He’s actually a bit of a slacker who, when not at his job at an infrequently visited video store, watches movies and saunters down to the square to buy ice cream. He’s only had one major love in his life, when he was in film school, and she left Sweden to go back home to India to marry the man her family selected for her. Objectively, there’s not much happiness going on in our protagonist’s life.

Our hero calls up the agency and, after an all-too-realistic wait in call-center-hold hell, is connected to a customer service agent named Maud. She explains to him how the charges were assessed: “It’s calculated according to a formula that takes account of age, place of residence, particular experiences, success, proximity to the sea. That sort of thing. Quality of home and relationship, et cetera.” And he’s far exceeded the debt ceiling.

Inevitably, the protagonist reflects on the parameters of his life, acknowledging how content he has actually been, and at the same time, despairing at how little he’s accomplished given all of the advantages he’s enjoyed. Is that, then, really something to be happy about?

Additional questions abound: What can explain why his Experienced Happiness bill is hundreds of times more than his friends’ bills? And how is he going to pay it? And, more ominously — what will happen if he can’t? After all, as Maud warns him, “We do have a debt ceiling, and once that’s been exceeded there’s no way we can grant continued access.”

The Invoice is not merely a neat little morality tale. It has a charming oddness mixed with a bit of menace, like Kafka with a soft spot — not to mention a taste for romance. Maud is strangely available for the protagonist to call at any hour of the day and night, in fact seeming to sleep at the center where she’s working. Through multiple late-night conversations, a relationship develops between the oppressed citizen and one of the agents of his oppression. But even this forbidden passion turns to Silly Putty in this protagonist’s hands.

“I could feel myself blushing, and it struck me how little it took for me to become keen on a woman. It really didn’t take much at all. As long as she wasn’t directly off-putting. Often all she had to do was be kind and pleasant. Or not even that. The unpleasant sort could also arouse my curiosity. Most of the time it was enough for a woman to show any sort of interest in me. But not even that was a necessity. I appreciated disinterest as well. In fact, I was even attracted by it. I realized that I didn’t actually need anything at all to get my attention.”

Is this relationship doomed? And, more importantly, just how does the agency intend to restrict access? No spoilers, but let’s say Karlsson deviates from the classic, soul-crushing Kafka track.

Some readers may find the protagonist a bit flat or passive. I read him as a pleasantly unassuming everyman. Would I want to date him? Doubtful. Would I be frustrated with his lack of direction if he were my child? Probably. But is he still endearing in his own way? Sure.

His slacker charm, however, may not be dynamic enough for everyone. For example, he doesn’t even bother to look up the W.R.D. on the internet or call a friend like most of us would. His lack of agency may distance some readers from his plight, and thus, from the central philosophical question of the book.

That point aside, here’s an analysis as short and sweet as the book itself: The Invoice is a quick, amusing read for anyone in the mood for an inventive diversion.

Tara Campbell is a Washington, D.C.-based writer. Her column “Text in the City” appears monthly in the Independent, and other work has appeared or is upcoming in McSweeney's Internet Tendency, The Establishment, Barrelhouse, Punchnel's, Master's Review, and Queen Mob's Teahouse, among others. With a BA in English and an MA in German, she has a demonstrated aversion to money and power — yet would likely have a whopping bill from the W.R.D.