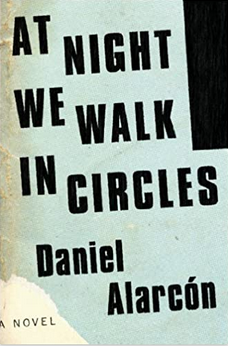 At Night We Walk in Circles is Daniel Alarcón’s second novel, billed by his publisher as his “breakout book.” I hadn’t read the Peruvian-born Alarcon before, and I was skeptical of this boilerplate praise stamped brightly on the galley I received.

To say I knew nothing of Alarcón, though, is a stretch. I knew that Alarcón had made The New Yorker’s “20 Under 40” list in 2010. By then he had already written an acclaimed story collection, War by Candlelight, and a novel, Lost City Radio, winner of the 2009 International Literature Prize.

Living in San Francisco and writing about his native South America, Alarcón had carved out his own literary niche and critical acclaim to go with it, and still the publisher wanted me to know that this would be his breakout book.

And so I opened At Night We Walk in Circles cautiously and started reading, and before I knew it I was on page 100, and quickly thereafter reading the novel’s final sentence. To put it mildly, Alarcón has written a stunning work of fiction. I’ve already handed it off to the next person to read. Maybe this is his breakout book, the one that will get eager readers to backtrack and read everything Alarcón has published before.

Alarcón has crafted a literary noir, a page-turner with plenty of suspense. But the novel is more than an atmospheric mystery. Alarcón has written a quiet character study of Nelson, an aspiring actor in an unnamed South American country. Nelson makes for rich reading because he has a long list of personal problems, rich terrain for any writer to venture into.

The novel is young when Nelson finds out that his girlfriend, Ixta, is sleeping with another man, one of the central lines that sustain the novel. Complicating things for Nelson, his brother has moved to the United States, leaving him to care for their widowed mother, and his acting prospects in the city are few.

This is all setup. The novel finds its bearing early on when Nelson meets Henry Nunez, his hero-playwright. Alarcón creates a detailed history for Nunez, founder of the legendary guerilla-acting troupe Diciembre, known for a play called “The Idiot President” that Nunez both wrote and starred in. As soon as Nunez started performing “The Idiot President,” it became a satirical sensation, a battle cry for audiences frustrated with their plodding government. The play also put Nunez in the crosshairs of the police.

The narrator explains that “The plot of ‘The Idiot President’ centered on an arrogant, self-absorbed head of state and his manservant. Each day, the president’s servant was replaced; the idea being that eventually every citizen of the country would have the honor of attending to the needs of the leader … the better part of each day … spent teaching the new servant how things should be done.”

The play touched a nerve with the country’s newly elected president, and in 1986 Nunez is jailed for his central involvement with Diciembre. The story of “The Idiot President” and its imprisoned creator attains legendary status, circulated among acting students, Nelson among them, a legend that grows bigger with each passing year.

Fifteen years later, Nunez’s friend Patalarga talks him into putting together a touring revival of “The Idiot President.” They want to hit all of the outposts and backwaters dotting the provinces. They want to take the story directly to the people once again. It is during the planning and casting of the revival that Nelson auditions for a part and wins the starring role. It is, he believes, the role of a lifetime.

From there Nelson’s fate is slowly revealed through the investigation of the narrator, a young man obsessed with Nelson’s story. The narrator of At Night We Walk in Circles, cloaked in mystery, becomes as intriguing as the story he is retracing, and in this way Alarcón has woven together a story within a story.

This mystery narrator is one of the most satisfying elements of the novel. Nelson is led blindly into his future, as is the reader. For the first time, Nelson finds wild success on stage in front of many audiences. But the deeper into the provinces Nelson, Nunez, and Patalarga venture, and the more audiences they perform in front of, the more complicated and bleak Nelson’s future becomes. The stage is ever present in the novel. Performance and performance art take on new meaning for Nelson, as does dedication to his craft.

The novel is as much about Diciembre’s history and revival as it is about Nelson’s unmappable future, both in his acting career and his personal life. When the tour finally takes the troupe to the hometown of Rogelio, Nunez’s former cellmate and confidante, Nunez’s past becomes inextricably intertwined with Nelson’s future. Nelson eventually returns to the city, where he finds that Ixta is pregnant by his rival, Mindo.

Through it all, the narrator adds a confounding layer to the story that unravels one thread at a time. By the end, without giving away any spoilers, Alarcón braids the many narrative strands back together in a satisfying if not devastating conclusion. We simultaneously learn Nelson’s fate and the identity of the narrator. But the suspense persists throughout the book, leaving me off balance and eager to read on. I needed to know what happened next. It was a very exciting journey.

Blake Kimzey’s short fiction has been broadcast on NPR and can be found in Tin House, FiveChapters, Short Fiction, Puerto del Sol, The Los Angeles Review, and Surreal South ‘13, among others. A recipient of a generous 2013 Emerging Writer Grant from The Elizabeth George Foundation, Blake is currently a student in the MFA program at UC-Irvine, where he teaches creative writing and is at work on his first novel.