The Patriarch: A Bruno, Chief of Police Novel

This latest in the detective series is as pleasant as a nice brunch. 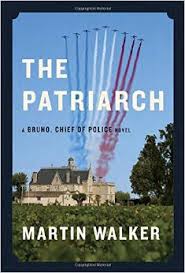 Think back to your most recent truly leisurely meal. You weren’t trying to cajole or corral time to fit your needs; you settled back, oblivious to time and accepting of the fact that it is ultimately oblivious to you, too. Maybe your meal was a five-courser at a four-star restaurant. Or maybe it was something more relaxed, like a long Sunday brunch at a nice French café in Georgetown.

You picked the best-looking fresh ham quiche in the display case, lingered at the espresso bar chatting pleasantly with the barista, and made a mental note to come back later for a homemade pastry.

Yes, you heard the occasional siren coming down Wisconsin Avenue, reminding you that it can be rough out there in the real world. But the wails were few and far between, and you nestled in and spent the morning reading the arts and fashion sections in the New York Times.

Congratulations. You are now in the right frame of mind to read The Patriarch, the new Bruno, Chief of Police novel, the eighth in a delightful series by Renaissance man Martin Walker.

Bruno’s (he’s Benoit Courreges on his birth certificate and nowhere else) latest adventure shows us a bit more of his soft side.

The story also ambles pleasantly along like a relaxed meal: The central crime is not even fully introduced until nearly a third of the way through the book. But Walker makes it feel organic to the story. It works. Before the tale heats up, Bruno gets to meet and spend time with a childhood hero, a respected fighter in the French resistance during World War II.

But all is not what it seems in the patriarch’s rarefied world. No spoilers here, and maybe the dust jacket gives a bit too much away, but a strength of the book is Bruno’s hunger to understand why people do things as much as catching them afterward. He’s interested in underlying causes — not typical of a cop.

There are many threads running through most of Walker’s books, and this one is no exception. The author brings his wide range of experiences to the narrative (he’s written respected histories of the Cold War and is a senior fellow at the Global Business Policy Council, a think tank based in Washington, DC).

He also spends half his time in a French town that is the model for Bruno’s residence. Where else would you learn so much about wine, or that the French use the most tranquilizers in Europe, or how to unravel the overlapping police and homeland-security forces elbowing for turf in this increasingly turbulent country?

I found it a bit hard to keep all the characters and story arcs straight. It could be my Americanism showing. Most French people could probably name a few U.S. presidents. Most Americans, though, don’t know if France is run by a president, a prime minister, or a wizard.

But a Bruno scholar, my mom, disagrees. “He can really tie all the pieces of a mystery together,” she reported after reading and enjoying The Patriarch. She does have a quibble, though: “I’d like to see him interact more with characters he’s introduced from past books, like the teacher he helped. Is the CIA agent coming back in the next book?”

This suggests longtime fans might enjoy this entry in the series more than the casual reader who picks it up at random. Of course, this is often the case with series, and it might not be fair to blame the author. Writers like Walker, Philip Kerr, and Robert B. Parker usually try to craft pieces that stand alone, with mixed results. Good series, especially Walker’s and Kerr’s, deserve to be respected enough for readers to start from the beginning and let the journey take them wherever it wants to go.

If there’s a lesson in the Bruno series, it is this: Take your time, enjoy every croissant, and live in the moment. It’s the only life you’ve got.

[Editor’s note: Martin Walker will be at Politics and Prose in Washington, DC, on Sept. 19th. Click here for details.]