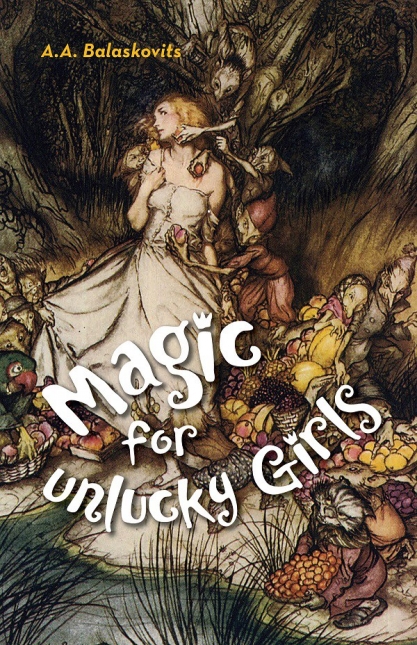 “It’s always been a man-beast, she scoffed, her throat rioting up into a hack. Can’t tell the story right, she said, spitting into the cold hearth, unless you tell it like it’s always been told.”

So says Gran-ma-ma in “Beasts,” from A.A. Balaskovits’ debut collection, Magic for Unlucky Girls, winner of the Literary Awards Program from the press Santa Fe Writers Project. But the similarities to the tale of Little Red Riding Hood end there: Little Red and her grandmother are not devoured by a wolf, nor saved by a woodsman.

Instead, “Beasts” warns of the dangers of domestication, of turning those we purport to love into people they are not. It also hints that the real power brokers of the forest (and beyond) are the fairer sex.

Balaskovits explores similar themes of magic and savagery in these pages; like “Beasts,” some reimagine fairytales such as Rapunzel (“Let Down Your Long Hair and Then Yourself”); others invoke the gauzy, Eastern European settings of fairytales, but with industrial, Kafka-esque updates (“All Who Tremble”); and yet others have no predictable markers of time or place (“The Romantic Agony of Lemon Head” and “Juniper”).

In this way, Balaskovits creates her own mythology that transcends time and upends traditional ideas about helpless damsels and men-as-beasts.

Although the fairytales in Magic are evocative, their aforementioned gauziness clouds together if you read more than a few at a time. What really draws blood in this collection are the stories in which the fairytale elements are spliced into more conventional, modern narratives. Such is the case in the opening story, “Put Back Together Again,” which evokes The Mothman Prophecies.

In a town besieged by increasing earthquakes, our protagonist, a female med student who works in an ER piecing back together the lower, snake-bitten strata of society (jadedly called the hump dumps), encounters a miracle man. As he begins to save lives during increasingly disruptive earthquakes (including the narrator’s own), the town splits into factions: Christ versus anti-Christ. Here, the truth never matters, only the camp that one is in: salvation or fate.

Another standout, “Eden,” evokes a strange feminine cruelty reminiscent of Shirley Jackson. “Everyone called him a horse fucker,” the teenage boy narrator says of Rolo, who works in a stable on the outskirts of town. The boy and his friends watch Rolo work while they smoke and ogle nude pictures.

Once a year, there’s an Apple Fest where the proverbial Apple Queen is both virgin and whore, tempting the narrator and his friends, and eventually Rolo. When a rumor circulates about the father of the suddenly pregnant Apple Queen, the women of the town are judge and jury, and savage ones at that. How do we atone for our sins? In a tale of virginity and innocence lost, atonement occurs at casting the first stone.

The jewel of the collection is “Bloody Mary.” Salter and her gritty, impoverished girlfriends find both safety and power in a place that’s secluded from their prying town’s eyes. Witches Castle is “a stone building covered in graffiti and moss,” where they bring items they have shoplifted or stolen from their parents to share and to fetishize in hopes of escaping their lives, their sexually abusive fathers and brothers, and the scornful judgments of those who glance at their desperate situations and see only outer savagery.

One of the girls, Salter’s girlfriend-girlfriend, Helene, plump and pretty and kind like her name, lives in a slightly better part of town and daydreams with Salter that they will live together when their parents die: “Salter took comfort in that goodness, though she never voiced how afraid she was that it might all be only wishes.” One day, Salter brings a book she has snuck out of the library, The Lives of Witches, and convinces the girls to take part in the ritual of Bloody Mary.

The risk, albeit high, seems worth it to a girl like Salter, who has nothing to lose. Or does she? A new girl, Mary, transfers to their school from Los Angeles after her father, a lawyer, takes a job at the town glass factory.

Helene is immediately friendly with shy, youngish, Mary, perhaps a little too friendly, convincing Salter that the girls need to perform the ritual immediately, but not to involve Helene “because Helene was, they all agreed, something like beautiful, and there was no reason to get beauty messed up in performance.” Especially now that Salter has found the perfect sacrifice to Bloody Mary.

Like the townswomen of “Eden,” who misguidedly think they are righting wrongs, the tragedy of “Bloody Mary” is manifold when Salter learns that “she had tapped into a cruel, wrong sort of magic after all.” It’s a heartbreaking tale, and we ache for Salter as much as we recoil from her unspeakable brutality.

“Magic,” for unlucky girls, Balaskovits reveals throughout, is never really magic at all, at least not the kind with princes and castles and ever after. It’s the illusory promise, the truth laid bare; the only antidote is to swallow the bitter pill and hope it makes you not only wiser, but stronger.

Jen Michalski is author of the novels The Summer She Was Under Water and The Tide King, the collections From Here and Close Encounters, and a couplet of novellas called Could You Be With Her Now. She is managing editor of jmww and host of the monthly fiction reading series “Starts Here!”