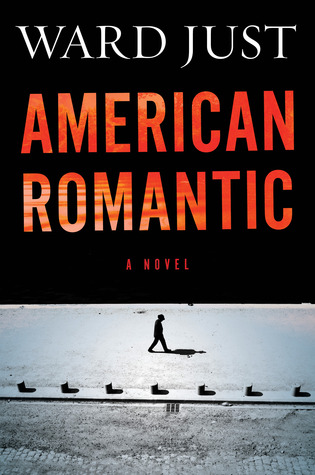 Pay no attention to early publicity that describes American Romantic as a passionate account of a young Foreign Service officer and the two women he loves. Yes, there are two women, but they are more embodiments of ideas than flesh and blood human beings.There is Sieglinde, a German nurse haunted by her childhood in Nazi Germany, who vanishes after a magical night of lovemaking. And there is May, the woman the young diplomat marries, haunted by her arid childhood in upstate Vermont.

But here, as in all Ward Just novels, the focus casts a wider light. Just’s subject matter varies, though his characters never stray far from the clubby set that represents old money and old family traditions in mid-20th-century America. But whatever the topic — politics, diplomacy, journalism, or a variety of social and cultural institutions — Ward Just explores the interior landscape of complex human beings whose lives are lived behind the scenes within a murky moral universe.

American Romantic, Ward Just’s 18th novel, begins with a scene right out of Joseph Conrad’s Heart of Darkness. Harry Sanders, a junior foreign service officer just shy of his 30th birthday, travels by barge up a river in Southeast Asia. Although the country is unnamed, it is clearly Vietnam in the early 1960s before the United States sent in ground troops. Just knows this country well from his days as a Vietnam reporter for Newsweek and the Washington Post. Harry’s task is to inspect five pet projects initiated by the Americans.

At the first four stops, Harry encounters a mysterious emptiness. But at Village Number Five, the site of a newly built medical clinic, Harry sees far worse: the grief-stricken village headsman carrying the shrouded figure of an emaciated old woman. Behind the headsman four enemy soldiers emerge from the burnt-out buildings, carbines slung over their shoulders. The American expedition escapes down the river, but questions about the moral value of one country imposing its values on another has been uncomfortably raised in Harry’s mind.

Two days later, Harry is sent by his Ambassador, Basso Earle III, on a secret mission initiated by unconventional channels to establish communications with the enemy before war breaks out in earnest. The mission is what Basso Earle calls a “moment of consequence,” a gamble, but one worth taking. What harm could come to a very junior American foreign service officer? Harm does come, and Harry is imprisoned in a jungle hut, poisoned, and left for dead. Harry makes his harrowing way through the “surly indifference” of the jungle, encountering a longhaired boy with a “sour and alien” smell, a carbine in his hands. Managing to wrest the gun away, Harry shoots the boy dead. That is Harry’s “moment of consequence.”

Harry Sanders chews over this experience for the rest of the book. He is well into his 70s now, long retired, living in a small village overlooking the Mediterranean, his wife dead. The failed secret mission forced Basso Earle into early retirement and altered Harry’s once promising career path. Harry is “protected” for life by the State Department and serves conscientiously at six or seven other embassies, at least three as Ambassador, but they are in out-of-the way places in terms of American strategic interests: Paraguay, central Africa, Cyprus, Oslo, the Balkans…. Snippets from these tours of duty mingle with scenes of Harry’s marriage and unbidden thoughts of Sieglinde, the German nurse he loved in Vietnam. The world presents a bleak face. Efforts to avoid medical care in the Third World lead to catastrophe in the First. Actions of “goons” on a “small Mediterranean Island” are mirrored by actions of thugs in San Francisco. Boredom is everywhere. All the while, Harry’s moment of consequence, never far from his consciousness, slips further into the historic past, a “dead letter” in official terms, filed away and forgotten by all but Basso Earle, Harry’s one link, who is dying.

This second part, like the first, is told in the third person but filtered largely through the mind of Harry Sanders. Ward Just is a masterful writer, and American Romantic is filled with stunning set pieces and repeated iconic scenes. But perhaps because they are here filtered through the mind of an aged man with a spotty memory, this part lacks concrete detail and chronology, making it frustrating to read. Exactly where was this tour of duty? Exactly when did that event take place? Some dates, such as Harry’s Vietnam service, don’t parse. Others can only be teased out through random remarks. I know, for example, that a particular scene takes place in 1992 because Harry makes a donation to the Clinton presidential campaign.

Yet the book makes important points indirectly. Near the end of his career, when Harry is serving as Ambassador to an unnamed Balkan nation, his wife is killed in an automobile accident, her car discovered at the bottom of a ravine. The French Ambassador invites Harry over for a long meal. “Your career,” the Ambassador says. “What have the years taught you?”

“My father’s table,” Harry replies, alluding to an iconic image that floats in and out of American Romantic. His father’s table is a Regency table set beneath a Marsden Hartley painting around which, every Sunday during Harry’s childhood, his family enjoyed splendid lunches with their distinguished Connecticut neighbors, which included a congresswoman and her physician husband, a retired brigadier general, two bankers, and a retired ambassador. They all told stories, Harry tells the French Ambassador, but what he learned was that something was always missing, a last fact that would undermine the system, a “missing piece that spoke to motive and perhaps misprision,” a fact that doesn’t line up with other facts unless you were there and experienced the context. This is what his years have taught him.

The publication of a new Ward Just novel is a time of eager anticipation for me and I am grateful for having read American Romantic. It is one part adventure story and two parts reflection. Its evocation of America’s early years in Vietnam is haunting. If you are an Old Just Hand, by all means read it now. If not, you might want to begin with another, for I don’t think American Romantic is Just’s strongest. If you are interested in Vietnam, begin with the early novel Stringer. Otherwise, try Echo House, which explores power; or An Unfinished Season, a coming-of-age novel that takes a close look at social institutions. But return to American Romantic, for it, like all Ward Just novels, has staying power.

Only Love Can Break Your Heart: A Novel

A heart of gold lurks within this ambitious tale of Southern adolescence.