Washington’s Immortals: The Untold Story of an Elite Regiment Who Changed the Course of the Revolution 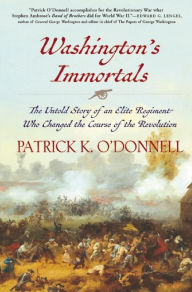 Patrick K. O’Donnell is a bestselling author and military historian. Well known for his works on more recent military history and special operations, his latest book turns our attention to the formative years of the American Army.

The Maryland Line was one of the Continental Army’s most stalwart, battle-hardened, and dependable units, and saw action across both theaters of the War for Independence from 1776-1781.

The study of that war is now more complete with O’Donnell’s fine portrayal. Some of the men in this book are not famous: William Smallwood, Mordecai Gist, Jack Steward, and John Eager Howard, among others. This hearty band of brothers earned their name, “Washington’s Immortals,” (also known as the “Immortal 400”) for their heroic rearguard action at the Battle of Brooklyn in August 1776, a crushing defeat for Washington’s nascent army. By virtue of their actions at Brooklyn, the bulk of Washington’s army was able to escape and continue the fight. This led, eventually, to American independence.

Washington’s Immortals is a “boots on the ground” account, with great storytelling verve that brings to life the variety of men from Maryland who cast their lot for the patriot cause. The Maryland Line saw action in some of the most crucial engagements of the war, including Trenton, Princeton, Stony Point, Camden, Cowpens, Guilford Court House, and Yorktown.

Readers are immersed in harrowing tales of brutal, close-quarter combat, and endure along with the troops at places like Valley Forge. The author adroitly concludes that these Marylanders had each other’s backs. They bonded, knew each other’s lives, and cared for one another. Their loyalty to their fellow soldiers and outstanding leadership made for a cohesive fighting force that weathered all aspects of campaigning.

O’Donnell mines a wealth of primary sources that bring to life the assorted stories of these American patriots. Readers also get a full, rich narrative because the story is told from multiple viewpoints. During the Continental Army’s near-disastrous retreat across New Jersey in 1776, we hear the voice of a British officer sneering about his enemy, “No nation ever saw such a set of tatterdemalions.”

And yet, as battered as they were at times, the Maryland Line fought on. From Valley Forge, Washington would write, “Naked and starving as they are we cannot enough admire the incomparable patience and fidelity of the soldiery.”

Mordecai Gist emerges from the pages as one of the chief protagonists. We see as he rises to the rank of brigadier general, but we also hear of Gist’s personal life. He loses two wives, and he is drawn to romance. But in a statement that is eerily like the famous love letter written decades later by Union Army Major Sullivan Ballou to his soon-to-be widow, Gist wrote, “The enchanting pleasures of Venus can never stand in the competition with Gods like mars when the soldier has Virtue enough to remember his Country.”

Even though Washington’s Immortals is about a particular group of soldiers, O’Donnell offers a broad picture of the war. We see George Washington, the Continental Army’s commander-in-chief, as a military leader with a bold strategic vision that his tactical skills would never match.

Hence, most of Washington’s seminal victories (such as Trenton and Princeton), were the result of bold strikes and risky gambles that paid off. His losses (Brooklyn and Brandywine), were the result of lacking intel, as on both counts he was badly outflanked because he failed to fully reconnoiter the turf on which he engaged the British. It has been said that Washington snared victory from the jaws of defeat. To do so, he needed soldiers who fought like the Maryland Line.

The foil to the Marylanders is British General Charles Cornwallis. It seems as if every encounter Washington’s Immortals experienced was with Cornwallis, thus it comes as no surprise that the Marylanders are standing erect in October 1781 when Cornwallis surrenders his army at Yorktown, ostensibly ending the military operations of the war.

Fittingly, the author concludes the book arguing that, “Washington’s Immortals were true citizen soldiers — a group of men of family, fortune and honor who followed the same path throughout the Revolution. When the war was over, they hung up their muskets and uniforms and began the hard work of building a nation. Many of the men were as successful after the war as they were during it.”

For readers who enjoy well-researched military history, this is the book for you. As in his prior works, O’Donnell has deep empathy for those who fought for honor, and for the sacrifices they endured.

James A. Percoco is the Teacher-in-Residence for the Civil War Trust and the Journey Through Hallowed Ground Partnership. He is the author of Summers with Lincoln: Looking for the Man in the Monument (Fordham, 2008) and is a member of the National Teachers Hall of Fame, Class of 2011.