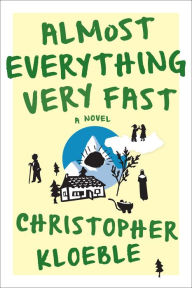 There are two parallel narratives running through Almost Everything Very Fast, German author Christopher Kloeble’s first novel to be translated into English. The connections between the storylines reveal themselves gradually, and it takes almost the entire book before they fully intersect. But we know they will eventually, and the journey to bring them together is a compelling one.

It’s tempting to describe this book as charming, which is surprising given that it describes murder and other violent deaths, rampant incest, Nazi brutality, and a host of lesser ugliness. Credit Kloeble’s unshowy, matter-of-fact — even tender — delivery for bringing in the light.

The primary narrative belongs to Albert, a 19-year-old who has spent the last 16 years in St. Helena’s orphanage, outside his hometown of Königsdorf. Albert is not actually an orphan, though: while he is desperate to know who his mother was, his father, Fred Driajes, is still alive. Unfortunately, Fred has the mental capacity of a young child — a six-and-a half-foot-tall, happy, enthusiastic child whose favorite word is “ambrosial” — and Albert has served as the parent in their relationship for many years.

The lone stable adult in Albert’s childhood is St Helena’s steely headmistress, Sister Alfonsa, with whom he has a close but complicated relationship. She recognizes his intellect, teaches him to play chess, and is obviously fond of him, but also levies his punishment each time Albert runs away to Fred, convinced that this time he can forge a real connection with his “Papaa.”

It never happens, of course. Through years of summer vacations, Fred’s primary occupations are reading entries in the encyclopedia and counting green cars each day from the town’s bus stop. Albert cannot glean any information from him. “Trying to hold a conversation with Fred, one that actually amounted to anything, was the most terrible, Sisyphean labor he knew.” But when a cardiologist callously waves five fingers at them to indicate how many months Fred has left to live, Albert makes up his mind to move in with Fred in a last-ditch effort to discover who his mother is.

The second narrative belongs to Julian, who serves as our link to a difficult past. Readers meet him in the prologue, a sharp old man with painful memories. He starts his story from a tiny Bavarian hamlet called Segendorf, a village so remote that the inhabitants don’t hear about World War I until after it’s already been lost.

Segendorf is so small that a significant amount of inbreeding mars the village: “It frequently happened that somebody’s brother was also his cousin, or somebody’s daughter also her sister. Quite a few local families had produced a ‘Klöble’ — a ‘clumsy, stupid fellow.’ Mothers of such children were spat upon.” (Kloeble seems to have made up this definition for his own name.)

Thus, the characters Jasfe and Josfer Habom are not just sister and brother, they are also mother and father to Julian and his sister, Anni. Tragedy ensues when 11-year-old Julian discovers the truth of that dual relationship, and thereafter he leaves the village and his beloved sister behind.

Though he lives a rich life with his savior and mentor, the undertaker Wickenhauser, he is drawn back to Segendorf for love of Anni, and arrives the night before she marries the one foreigner who has ever survived stumbling into the village, a Pole named Arkadiusz Driajes.

While Julian bides his time and stews over the interloper, he fathers a child with Mina, the Klöble who loves him, who helped him to abscond years before. His child and Anni’s are born days apart. And if the Great War bypassed Segendorf, the Nazis do not, and they perform their own brand of “housecleaning,” rebranding the village as “Königsdorf.”

At its heart, this is a novel about absent parents. Some characters try to spin that absence into a positive. Fred’s next-door neighbor Klondi, who fully understands her own stunning failure as a parent, comforts a young Albert by saying, “Mothers are overrated, Albert. If you ask me, you can count yourself lucky that you grew up without one.” Wickenhauser makes the same point to Julian: “We’re all better off without our parents.”

But, of course, that’s not really true. The void is always too large to fill, though it doesn’t stop any of the parentless characters from trying. Even Fred stalks the sewers of Königsdorf in search of his father, while Albert continues his detective work into the identity of his mother. All he has is a single photograph and a compact that contains two strands of hair that are just as red as his own. And Sister Alfonsa, firmly believing that Albert and Fred should be staying at St. Helena’s in Fred’s last few months, knows exactly the way to lure her favorite back: “I could show you who your mother is.”

Sister Alfonsa has never before hinted that she knows this truth, and her bait does the trick. Albert, Fred, Klondi, and Albert’s old girlfriend Violet pile into Violet’s Volkswagen for the road trip back to Sister Alfonsa and the answers to their many questions.

Ultimately, these answers may not be very satisfying, because, truly, what can ever make up for a lifetime of absence? Perhaps Fred has the answer to this question when he remarks, “We are all Most Beloved Possessions” of those to whom we are most present.