The Exchange of Princesses: A Novel

Two child-marriages are arranged in order to consolidate kingdoms, but at what cost to the pawn-like youngsters involved? 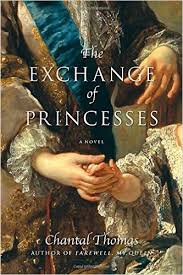 The two young princesses approach and trade brief kisses under the pavilion on Pheasant Island. Neither of the girls, aged 3 and 12, has any idea what is in store after she passes through this ceremonial exchange. Each is leaving her home country for a child-husband in a foreign land. It is 1722, and the girls are pawns in their parents’ games of peace and power.

By novelist Chantal Thomas’ telling, the father of the 12-year-old French princess dreamed up the scheme while recovering from a brutal hangover in his perfumed bath. With his eyes closed to his massive paunch, Regent Philip d’Orleans conceives of a way to keep his 11-year-old nephew — King Louis XV — from producing an heir in the near future. A plan which will, by the way, improve Philip’s own chances of assuming the throne.

If the young king marries the nearly toddling Spanish princess, Louis XV will have to wait years for the girl to come of age. And if the regent can sweeten the deal for the Spanish by throwing in his own daughter as a wife for the 14-year-old Spanish heir, all the better. The children’s marriages will, Philip dreams, bind the countries together and reduce the chance of war. All while elevating himself.

After proxy marriages, the girls set out. They hazard weather, treacherous roads, and, worst of all, widespread disease before encountering one another in their bewildering pavilion ceremony at the border. The 3-year-old Spanish princess, Mariana Victoria, wails at being separated from her nursemaid and delivered into utterly foreign hands. The 12-year-old French princess, Louise Elisabeth, is fevered, suffering from something she contracted along the way, and hardly notices what passes. But their elders near and far do.

The French nobleman charged with delivering Louise Elisabeth is strategizing about how best to ensure the marriage goes off without a hitch and thereby earn himself a higher rank. The new French governess to the Spanish princess is enchanted with her young charge. But that governess is already the beloved mother-figure to the young, orphaned French king, who is unlikely to welcome a competitor. (Even if the girl is, according to the paperwork, his wife.)

And thus sounds the first ill-boding note for this quartet of young royals. By the end of their experiment in marriage, one of the four will be dead, and neither the marriages nor the international alliance will conclude as Philip d’Orleans had planned.

Philip’s own mortality hangs heavily over his musings and his strategies. He is terrified of becoming irrelevant to the fawning and alliance-building of the Court, and as he considers his own extensive flesh, he fears that his love of pleasure will bring him ruin.

This love of his own flesh, however, does not seem to extend to his daughter Louise Elisabeth. Most of the novel’s tension comes from our concern for these trafficked princesses and the risks, physical and otherwise, they face in fulfilling their parents’ plans.

Such concern may be an anachronism, as Thomas notes: “Who in this period can lay claim to a childhood?” Yet we can’t help but ache for the brave 3-year-old bidding a confused farewell to her parents, or fear for the 11-year-old French king yearning to exercise his authority.

The four children may be pawns, but they dominate the novel. Mariana Victoria charms the Parisian public, at least at first, while Louise Elisabeth struggles with the ascetic and hunting-obsessed Spanish court. Louis XV wrestles with his budding sexuality and his loneliness, while the Spanish heir Don Luis moons about, fixated on his latest boar kill and his longing to consummate his marriage.

Unfortunately, four fascinating characters are not enough to sustain Thomas’ ambitious storytelling. She eavesdrops on the thoughts of the royals, the ambassadors, the governess, and even Mariana Victoria’s dolls. The result is a cool, detached narrative with an almost ironic tone. The book feels a world away from her previous novel, Farewell, My Queen, an intimate, tactile telling of Marie Antoinette’s last days in Versailles.

Thomas deepens the distance by shoe-horning in primary-source quotations. While the information is fascinating, the insertions give the novel the stiff feel of a documentary or, worse, a reality TV show. When Louise Elisabeth leaves France, “Her grandmother, the Princess Palatine, comments on her departure: ‘One cannot say that Mlle. De Montpensier is ugly, but she is surely the most unpleasant child alive, in her way of eating, of drinking, of speaking.’”

That princess — the elderly grandmother one — ultimately steals the show. In a novel about the confusing boundaries between childhood and adulthood, and about the inevitable mortality of our flesh, Princess Palatine reminds us that the best adults retain the perceptiveness and joy of children. The aged princess is “at once adult and child,” and is one of the few to perceive the wisdom in her grandson Louis XV’s Spanish bride.

In the long run, we will all be dead, as are all of the protagonists in Thomas’ nearly 300-year-old tale. But this novel reminds us that we can try to make the best of even the most circumscribed lives, and we might find joy in the love of a like-minded soul.

Carrie Callaghan is a senior editor at the Washington Independent Review of Books. Her short fiction has appeared in Weave Magazine, Silk Road, the MacGuffin, and elsewhere. She lives in Maryland with her family and one floppy cat. Follow her on Twitter at @carriecallaghan.