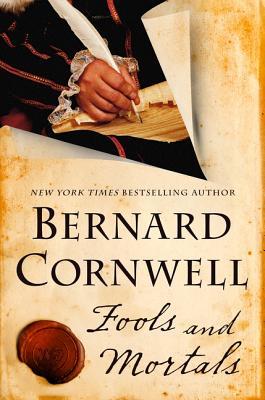 Bernard Cornwell’s 55th book is something of a departure. True, it’s an historical novel, but it is not concerned with military adventure. Rather, it tells the highly speculative tale of William Shakespeare’s initial production of A Midsummer Night’s Dream as recounted by his younger brother, Richard. So little is known of the writing and inaugural production of the play, and even less of Richard Shakespeare, that Cornwell had free rein to let his imagination run wild.

The play is thought to have been written around 1595 or 1596. It may first have been performed at a royal wedding, but no one knows for certain. Cornwell opts for 1595 for its writing and the wedding of Baron Hunsdon’s daughter (the baron is Elizabeth’s cousin and Lord Chamberlain) as the setting for its first performance — with the queen in attendance. Baron Hunsdon also happens to be the patron of the Lord Chamberlain’s Men, Shakespeare’s theater company.

Richard, 10 years younger than his famous brother, is something of a ne’er-do-well and petty criminal in Stratford. Under pressure of arrest, he flees home and heads for London, where he hopes his brother will provide shelter and employment.

For reasons never explained, the brothers’ relationship is strained at best and hostile at worst. Rather than welcoming Richard, William sends him off to Sir Godfrey, a cruel and brutal priest (Cornwell rarely features a sympathetic cleric of any faith) who trains young boys for the theater.

Richard eventually does join William’s players at the Theatre (the Globe wouldn’t be built for a few more years), taking the parts of girls and women. Richard grows increasingly resentful of William over these parts — he is now 20 and wants to play the more substantial male roles.

William seems to delight in humiliating Richard — he promises him a male role in the new play that turns out to be Francis Flute, the bellows-mender/actor forced to take the female role of Thisbe in Pyramus and Thisbe, the play-within-the-play. Richard is not amused.

The first half or more of the book is taken with setting the scene for the little action in the second half. We get plenty of background on Elizabethan theater and the politics of the time. There is tremendous paranoia afoot with the queen fearing another attempt by Catholic forces to overthrow her (the Spanish Armada had sailed just eight years earlier). The Puritans despise the “sinful” playhouses and their companies, all of which are retained outside the walls of the city.

A company’s plays are its lifeblood. Lacking any copyright laws, plays are jealously guarded. Competition for audiences is fierce, and new plays are constantly required in order to keep the crowds coming back. As Shakespeare rehearses his players at Baron Hunsdon’s London estate for the premiere of A Midsummer Night’s Dream, he is putting the finishing touches to his Italian play about a pair of doomed lovers.

A competing company attempts to enlist the impoverished Richard into stealing the scripts of A Midsummer Night’s Dream and Romeo and Juliet. When the scripts are indeed stolen, suspicion naturally falls on the younger Shakespeare.

The attempt to recover the plays provides the only action in the book and it is brief (and involves Richard’s old enemy, Sir Godfrey). No one is killed in the course of these events — although blows are delivered — a first in a story by Cornwell, who is usually quite bloodthirsty.

Cornwell was inspired to write this novel by his performances with the Monomoy Theatre in Chatham, Massachusetts. He divides his time between homes in Charleston, South Carolina, and New England, where his American wife is originally from. In recent years, he has begun performing with the theater company and seems to have taken to it.

Cornwell brings his usual penchant for historical accuracy in setting his scene, but there isn’t much incident or excitement in the book to hold the reader’s attention. While all of the detail about the workings of Elizabethan theater is mildly interesting, it’s not enough for a nearly 400-page novel.

The Maid: A Novel

This cozy whodunit is a joy from the first page to the last.