All Sorrows Can Be Borne: A Novel

Though based on real events, this tale of a Japanese woman forced to give up her child is surprisingly whitewashed. 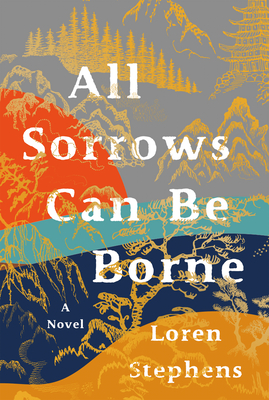 In 1964, Noriko Ito and Ichiro Uchida put their toddler, Hisashi, on a plane at Tokyo’s Haneda Airport. They are sending their only child away to be adopted by Ichiro’s sister, who married a Japanese American man and lives in Montana.

Like most mothers who must relinquish their children, Noriko doesn’t want to send Hisashi away, but Ichiro insists. Due to tuberculosis, he has trouble holding a job and has become embittered by his failures, leading to an estrangement between husband and wife. Nevertheless, when Ichiro demands that they send Hisashi to America, Noriko reluctantly acquiesces.

Her mother chastises her, “You give up too easily. You carried your baby for nine months and took care of him for nearly three years, and after all that you give him away.”

Loren Stephens’ debut novel, All Sorrows Can Be Borne, tells the story of that separation, which is based upon her husband’s biography. [The author is unrelated to the reviewer.] In the acknowledgments, she thanks him for giving her permission to share the tale.

But it’s not really her husband’s story; he is the object, a child whose destiny is being decided for him. The subject is Noriko, a doting mother and obedient wife who finds the two roles in opposition to each other. Much of the story is narrated from her first-person point of view, with occasional switches to the third person for those scenes to which Noriko is not privy.

The plot largely follows Noriko’s life, starting with her survival of the bombing of Hiroshima, a detail that feels tacked on, the discrimination and shame that survivors were later subject to never addressed.

Noriko dreams of being an actress but fails to pass the audition for the prestigious Takarazuka Academy, and so takes a position as a waitress in one of her sister’s Osaka tearooms, where she meets handsome Ichiro Uchida, the general manager. The son of a rich man who has been cut out of his father’s life in favor of a new wife and her children, he is smart and cultured, with a taste for Beethoven, Billie Holiday, and The Little Prince. But he couldn’t afford to go to college and so can never rise above low-level jobs.

They marry, and soon she’s pregnant. Before she gives birth, Ichiro is diagnosed with TB. After prolonged absences from work due to convalescences, he loses his job. He is able to procure other work, but nothing that pays well or soothes his pride.

Racked by guilt that he’ll never be able to give his son the life he deserves, Ichiro pressures Noriko to sign away her parental rights so that his sister can adopt Hisashi, telling her it’s for their son’s sake. But Noriko isn’t fooled and tells him, “I am trading my son’s life for yours, Ichiro. Don’t ever forget that.”

Nevertheless, she signs, and Hisashi leaves Japan to become Dwight Mishima. Things do not improve in the Uchida household, though, and tragedy follows tragedy.

Though the novel is “inspired by true events,” a lot gets lost in translation. Despite the fact that the main characters are Japanese and most of the story takes place in Japan, Western cultural references predominate, and the character of Noriko comes off as a white, American woman trapped in a Japanese world. Her favorite play is “The King and I,” favorite song “Rhapsody in Blue,” favorite actor Tyrone Power. And she idolizes Jackie Kennedy.

In addition to the glaring absence of Japanese cultural references, there is little care for historical verisimilitude or an understanding of the Japanese character (there are copious books written on the subject; I recommend Ruth Benedict’s classic, The Chrysanthemum and the Sword). When it is convenient to the story, there are Japanese elements, but they feel dutifully pasted in — to show that the author did her research — and then are quickly nudged out of the way for discussions on jazz and Jackie Kennedy’s wedding dress.

Historical details are similarly sloppy, transposing the prosperity of contemporary Japan — with its air-conditioned auditoriums and ice cubes — and an era when the country was still struggling to recover from the devastation of World War II. Indeed, Noriko and Ichiro give Hisashi up because of economic concerns, and yet there is never a feel of poverty or want in her narration.

Perhaps the “true events” and personal connection of the author to the tale being told blinded the many people involved in bringing this book to print of the need for a sensitivity reader and a review for historical credibility. That such a whitewashed story made it all the way to publication is shocking, particularly at this moment in time. The carelessness with the ethnic, cultural, and historical details in the novel makes it clear that this was not the author’s story to tell.

Kidnapped and taken to North Korea, a witty, surly adoptee tugs at her roots.