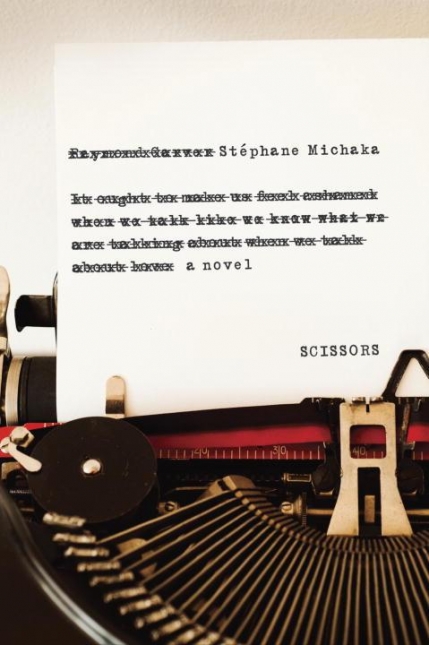 Raymond Carver was one of the most celebrated writers of the 20th century. His taut, explosive short stories chronicled the working class and are often imitated, but rarely matched. The well-documented outline of his life story is also the stuff of literary mythology, bordering on cliché. Carver was a brilliant, but tragic, figure, haunted by debilitating alcoholism, more connected to his stories than to the people who loved him, dead from lung cancer at the age of 50.

Scissors by Stephane Michaka is a fictionalized tale about the last years of Carver’s life. The story unfolds through bursts of first-person narrative told by Raymond (who is never given a last name) and the three people who loved him most: ex-wife Marianne (based on Maryann Carver), second wife Joanne (based on poet Tess Gallagher) and longtime editor Douglas (based on Gordon Lish).

In the book as in Carver’s life, Raymond and Marianne marry young and have two children in quick succession. It is a relationship marred by emotional and occasional physical violence, as shown in one of Michaka’s most successful Carver-esque sentences: “Two days ago, I broke a bottle on Marianne’s head.” Marianne encourages Raymond’s writing, even feeling ownership over the work, despite the fact that it often is an open window into their tumultuous relationship.

If Scissors had maintained its focus on this dynamic, it might have felt a little less disjointed. Instead, this is also a novel about the equally destructive relationship between Raymond and Douglas. Portrayed as little more than a narcissist, Douglas brings Raymond to the attention of the world by publishing his stories in a prestigious magazine. But he also edits the stories in a manner that seems more like he was writing them himself. It is not uncommon for a 15-page story to become a three-page piece after Douglas is through. There is a reason that Douglas is known as “Scissors.” Douglas believes that Raymond’s work is also his own:

“When I’m editing Raymond, a strange phenomenon occurs: I see Douglas through him. All his secrets are mine. When I edit Raymond, I have no more doubt.”

This is a fascinating insight, though possibly more so for writers, who chafe at the red pen of editors and often blame ulterior motives for their tampering with precious prose. Like much of Scissors, this closely tracks the real-life tension between Lish and Carver, who had one of the more public and intense editor-writer relationships of modern times. When Gallagher pushed for the release of Carver’s stories in their original forms, she dared the literary community to compare them to Lish’s edits. The New Yorker did just that by publishing a line-edited version of “Beginners” and an accompanying article that solidified the narrative of Carver as a victim of Lish’s editorial predations.

Michaka accepts the characterization of Lish, reborn as Douglas, a little too fully to serve his novel well. Douglas never comes across as more than a preening fool. A more nuanced portrayal could have made an interesting exploration of the mutually beneficial (though often quite painful) symbiosis between writer and editor. However, Michaka does approach the subject in a unique way. He includes four original short stories in the novel, written more or less in the style of Raymond Carver and attributed to Raymond, the protagonist. Michaka allows us to read them in their original form and then proceeds to have the characters discuss how they are being butchered by Douglas. The edited stories are not presented in the book, though as in real life they are highly lauded.

The short stories themselves are among the best parts of Scissors. They are elegant, self-contained portrayals of the writer that shed more light on the characters than much of the choppy first-person narration in between. The stories make the reader wonder how much better the novel would have been if Michaka had allowed himself greater license to stray further from Carver’s life. It is true that you do not need to be a Carver scholar to read the book, but knowledge of his biography does help explain some of Michaka’s choices. For example, the interesting Marianne largely disappears in the second half of the novel, replaced by the bland Joanne, mirroring the real-life Carver timeline but cheating the reader of resolution of the novel’s most complicated relationship. Raymond and Marianne’s troubled life together gives Scissors its weight, leaving the book unmoored when it is no longer central to the story.

Scissors will be of greatest interest to those who are familiar with Carver’s life and work, and can honor his memory by reading between the lines of what is actually on the page.

Michael Landweber is the author of the novel We. His short stories have appeared in a variety of places, including Gargoyle, Fourteen Hills, Fugue, American Literary Review, Barrelhouse and Ardor. He is an associate editor at the Potomac Review.