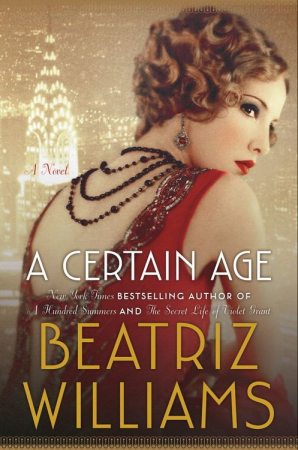 It’s the Jazz Age, 1920s New York City. Secret passwords open doors to dark bars and bad drinks; plush living rooms and ritzy garden parties bring together people with too much money and too little purpose; strangers and newcomers with mysterious pasts are fodder for intrigue and gossip. All of this, combined with humor, a twisting plot, and cameo appearances by Ty Cobb and Man o’ War, makes Beatriz Williams’ new novel, A Certain Age, a highly entertaining read.

Mrs. Theresa Marshall (of Fifth Avenue and Southampton, Long Island) has a lover. A young one — though Theresa is “of a certain age”— and this affair is at the heart of the story. There’s more, though. It’s the Jazz Age, after all, a time of bathtub gin and speakeasies and a kind of desperate behavior that comes on the heels of a Great War and not too long before a Great Depression. Theresa notes that her fortune was “enough to keep us in silks and horses and ennui,” a fine summary of the lives lived in these pages.

Parts of this story are somewhat familiar, and I don’t think Williams would mind my saying so. She loosely based it on Richard Strauss’ opera “Der Rosenkavalier,” which is one of the book’s delights. Williams borrows and steals characters’ names, relationships, and plotlines from the composer.

Somewhat similar to the opera, Theresa’s lover, Octavian, is enlisted into serving as her brother Ox’s cavalier (a gentleman escort to a young woman). Octavian is given the task of proposing to Sophie, the woman who has captured Ox’s fancy. Perhaps a reader can see already how this might go: The cavalier falls in love with his charge, and the charge is smitten in return. One doesn’t need to know Strauss’ opera to enjoy this book, but if one does know it, the homage will only add to the enjoyment.

And there’s more! There are murders and mysteries, some long-buried, others fresh as a newly bloomed orchid and head-spinning as a home-distilled martini. The coincidences and misunderstandings are many and fast-paced, creating a whirl of a novel that pulls you in deeper and deeper. The characters are often faced with choosing between desire and honor; luckily, they rarely do the right thing.

When Theresa begins to suspect that Octavian is attracted to Sophie, she tells the reader, “I want to say something kind about this child, this Sophie: something generous. I really do. But it’s as if I’ve boarded a ship of some kind, have taken command of an ocean liner of immense gross tonnage, and though I can clearly see that our course is leading to a disastrous collision, I can’t quite seem to put the engines in reverse. There’s no possible way to change direction.” Indeed, for most of the book, for Theresa, there is not.

Alternating between Theresa and Sophie’s points of view, A Certain Age gives readers two strong and worthy female characters. Theresa may be conniving at times, but she is intelligent and vulnerable. She is also unwilling to play the victim. Her sections are told in first person, and Theresa’s voice is funny and irreverent. The woman is clever and gutsy.

Sophie’s sections are told in third person — perhaps because it gives her story more distance, as though she is not quite in control of her situation — but her youthful exuberance is bright and clear. Due to an invention her father patented, Sophie is a young woman of recently earned means with a deep interest in mechanical engineering. In the hands of a less thoughtful writer, Theresa and Sophie might have been caricatures. In Williams’ good hands, they’re ahead of their time, feminists struggling — despite the culture, despite the odds — to stand on their own.

A reader comes to a historical-romance novel expecting a fun read, but Williams, a powerful observer, brings more to the page. She recreates a place and era through sensory details and evocative descriptions. “It’s past eight o’clock, and the streets are settling into quiet, the Manhattan sort of quiet, in which taxis rattle past and people hurry down the sidewalk, but at a lessened pace, a reduced volume. You can breathe a little, even if the air is dank and sour and oily, and smells of rotting garbage.”

A Certain Age is a physical story, one of intense emotions and yearning bodies: “He found the rhythm in an instant, he drove and drove in the manner of a tender machine, watching my face the whole time, expression of wonder and torture, and my God, I can still feel the way my flesh hurtled at last,” Theresa says.

“I’m a slave to my emotions, to my likes, to my hatred of boredom, to most of my desires,” Amory Blaine said in F. Scott Fitzgerald’s This Side of Paradise, a novel set in the same glittering and tarnished and madcap and dreadful era as A Certain Age. These sound like words Theresa might have spoken if she’d thought of them first. I think it says something that a reader is put in mind of Fitzgerald after reading A Certain Age. It says something good.