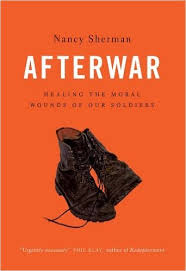 Nancy Sherman’s new book, Afterwar, is as fascinating as it is crucial to our collective recuperation after 14 years of war. A professor of philosophy at Georgetown University with a background in psychoanalysis, Sherman has devoted much of her research to the effects of war on soldiers.

In her earlier books, Stoic Warriors and The Untold War, she studies how military training fortifies resilience and courage on the battlefield, but may hinder the transition to civilian life for men and woman leaving the service. In Afterwar, she explores the emotional impact of battle, especially the moral bruising that results when soldiers perform acts that conflict with their sense of decency, integrity, and honor.

Sherman interviewed scores of men and women from all branches of the military to garner information about transitioning soldiers’ internal struggles. Some of these soldiers’ angst stems from the violence intrinsic to war. After returning, they may begin to see their brutal acts as pointless or even reprehensible. Sherman cites the example of a Vietnam veteran she calls “Bill,” who was considered a hero for his deadly attacks on the enemy.

However, “Bill came home profoundly disillusioned, regretting his war, feeling suckered by the Army, and angry that he was fooled into thinking that his service was patriotic.” He sank into self-loathing and profound resentment of those “he believed aided and abetted his becoming a murderer.” This kind of response can lead to illnesses such as depression, anxiety, and alcoholism. In extreme cases, it can lead to suicide.

Several of Sherman’s examples are men and women in leadership roles who grapple with the limits of their ability to avert disastrous situations. For example, a Marine named Lalo, who served in Iraq and Afghanistan, lost three of his men in situations for which he feels responsible. On one occasion, a Marine in his convoy had to defecate. The driver stopped the vehicle and the young man headed for a hut for a bit of privacy, but on the way stepped on an IED (improvised explosive device) and died.

Lalo is haunted by guilt because he didn’t think to remind the Marine that the area was mined. Lalo saw himself as a big brother responsible for protecting those under his command. Sherman writes, “In his psychic reality, he sees only his missing causal agency — what he let happen on his watch. He doesn’t see the inflated sense of control he inserts in constructing this picture of volitional and morally responsible agency. He doesn’t see that he is making the blame fit by turning an omission, for which he isn’t at all culpable, into a transgression that will hold him blameworthy.”

The military fosters this sense of responsibility for others, which is essential for the operational efficiency of the unit. Consequently, when a soldier dies, commanders often feel they have failed. Sometimes they replay the images of the devastating incident over and over in their minds like a video, becoming paralyzed by despair. In order to heal, they need to let go of the notion that they were able to control every eventuality on the battlefield, and this may require hours of therapy, as well as support from loved ones.

Sherman cites another case of a young Army major whose dealings with an incompetent U.S. government agency caused him terrible anguish. When a civilian family crossing a cordon at a checkpoint got caught in the crossfire of a U.S. attack, the major was charged with meeting with the survivors and arranging for reparations.

The family had suffered horrendous losses — the death of the father, mother, and a son — but the major was unable to secure the bodies of the deceased in a timely fashion or obtain reasonable compensation for the remaining daughter and her uncle. The soldier felt guilty because of what he saw as his powerlessness to rectify a wrong inflicted by fellow Americans.

When well-meaning citizens thank veterans for their service, notes Sherman, the reaction is sometimes intensely negative. Soldiers returning from war often complain that such expressions of gratitude are superficial and insincere. They are a means for making citizens feel good, as though they had “done their duty” toward returning soldiers without bothering to explore their state of mind. Indeed, observes Sherman, most Americans have no idea of the moral tribulation that plagues returning soldiers. Consequently, some veterans, feeling misunderstood, adopt an “us vs. them” attitude toward the public.

Sherman argues that it is the responsibility of everyone, military and nonmilitary alike, to be accountable for our veterans’ moral healing in order to produce a healthier, more productive society. Service members must realize that when people express appreciation, they are “owning” our wars and allying themselves with those fighting them.

Soldiers, who have learned to maintain a stoic demeanor on the battlefield, must not alienate supportive citizens. However, citizens must do more than wish our warriors well. They must support programs and legislation to help them receive the medical and psychological help they need to reintegrate into society. Only by engaging in a serious national dialogue about the emotional costs of war will we be able to make responsible decisions about sending our men and women to fight.

Sherman has done the public a great service by writing this thought-provoking book. As citizens, we must realize that many of our fighters, even those who display no physical injuries, carry deep moral wounds. Our efforts to restore them to health cannot end with the body. It must extend to the soul.

Bárbara Mujica is a novelist and professor of Spanish literature at Georgetown University. Her latest novel is I Am Venus, based on the life of the Spanish painter Diego de Velázquez. She is also author of Frida and Sister Teresa, based on the lives of Frida Kahlo and Teresa de Ávila, respectively. The mother of a U.S. Marine, Mujica is faculty adviser to the Georgetown University Student Veterans Association and co-facilitator of the Veterans Support Team. She writes and speaks frequently about student veterans. In February 2015, she received a Presidential Medal from Georgetown for her work on behalf of veterans.