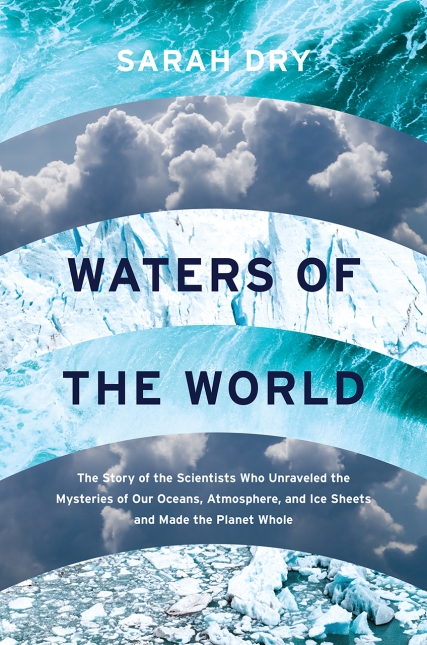 Today, we take many facts about the climate for granted. It feels like we’ve always known, for instance, that the greenhouse effect traps heat, keeping us water-sack humans protected from the extremes of deep space. And seeing images of gyres spinning through our oceans in ninth-grade earth science now seems mundane. The study of meteorology is as everyday as our morning commutes.

Yet we’ve only started to understand how our planet’s water systems work in the last hundred years or so. The scientists who first studied them often faced danger, personal sacrifice, and perhaps a bit of madness. Climate and meteorology historian Sarah Dry’s newest book, Waters of the World: The Story of the Scientists Who Unraveled the Mysteries of Our Oceans, Atmosphere, and Ice Sheets and Made the Planet Whole, tells of the people who figured out how our weather systems work.

Whether this chronicle is compelling, though, is up for debate.

Dry writes about seven individuals whose contributions still echo. These include John Tyndall, who fell out of vogue during his time but is now considered the father of climate science; Willi Dalsgaard, a Dane who discovered time and atmospheric shifts in the ice layers of Greenland; Joanne Simpson, the first woman to earn a Ph.D. in meteorology; and others.

The life and work of each is carefully researched and rendered. Their theories are explained in exacting detail. Their training, rivals, and influences are also included, creating a scientific spider web on the page. Unfortunately, while Dry’s understanding of who helped with what is impressive, it’s nearly impossible to keep track of the cast of characters, especially since some of them fail to pop off the page with any vibrancy.

Waters of the World is also a book of adventure. There are death-defying hikes up the Alps and less-than-perfect voyages around Cape Horn. Yet, to each scientist’s adventure, Dry adds data-heavy chunks of information that weigh the saga down.

It’s clear Dry is a gifted scientific historian; she’s a seasoned writer with books about Marie Curie and Isaac Newton. As an excellent scholar of primary-source documents, she pins down the important connections that make the study of history so vital. She binds trends, events, and culture to create a complex and nuanced picture of the theories she writes about.

To wit: It makes for poetic bookends that the first part of Waters of the World helps us understand the impact of CO2 in the atmosphere, while the final section illuminates how oxygen in our air has changed over time.

Still, questions of audience and accessibility remain. Dry’s style features long, complicated sentences that frequently lack imagery or playfulness. It’s hard to imagine a general reader finishing Waters of the World. What would this book have been like with just a bit more wonder and storytelling?

However, it does boast one bit of magic: It reminds us how little we once knew and how, not long ago, scientists made mistakes as big, crazy, and glorious as their discoveries. It also reminds us how young the idea of connectedness is; we are in the infancy of understanding how everything from ice sheets to ocean gyres are interwoven.

Perhaps here is where Dry is onto something. Maybe our grasp of that connectedness will be the key to facing climate change, humanity’s biggest challenge.

Gretchen Lida is an essayist and an equestrian. Her work has appeared in the Washington Post, the Rumpus, the Los Angeles Review of Books, and many other publications. She is also a contributing writer to Book Riot, Horse Network, and the Independent, and is working on her first book. She lives in Chicago and is still a Colorado native.