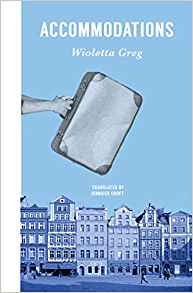 For most Americans, reading Wioletta Greg’s slim coming-of-age novel, Accommodations, will be a journey to an unfamiliar destination: Poland, just as it is emerging from the shadow of the Soviet empire. The book’s translator, Jennifer Croft, presents a faithful rendition of the Polish text, with no special concessions to readers who don’t know what a “Gierek-era” wardrobe looks like, what Wuzetka filling is, or why "moly" would be coating a salami.

This much we know: It is Friday, September 30, 1994, and Wiola has left her small village to enroll in university in Częstochowa, a city whose renowned monastery attracts flocks of pilgrims. Upon her arrival, she finds that there is no room for her in the dorms. She can either admit defeat and return to the family farm to help her mother (who didn’t want her to go away to school) or take the advice of the indifferent university administrator and find her own accommodations.

She remembers “an old acquaintance” who runs a workers’ residence and procures an unheated “bedroom that is more like a cell, with mold stains on the walls,” some dilapidated furniture, and a rusty sink.

Our heroine is an avid reader who favors titles like Lord of the Flies, The Tempest, and Tropic of Cancer, which offer her refuge from a harsh, violent upbringing. At the Vega, as the residence is called, she is introduced to a strange demi-monde inhabited by a pair of shady Russian twins “who work the markets”; a grizzled, limping ex-convict security guard with an Antabuse implant in his bottom; and her imperious, glamorous acquaintance from the neighboring village who seems to be using her position as manager of the Vega to run some sort of illegal enterprise.

The Vega is not conducive to studying, as the residents keep her awake with late-night carousing. In any case, she learns more outside the classroom than in dull lectures on Latin and historical grammar.

Interwoven in the bildungsroman plot are anecdotes, overheard conversations, and Wiola’s childhood reminiscences that illustrate how Poland’s brave new market-driven world is littered with the wreckage of Communism, haunted by the horrors of World War II, and dominated by the Catholic Church.

In an extended imagined soliloquy, her grandfather laments the hollowing out of agricultural villages and the disappearance of the old ways, “how nobody these days puts up pine crowns on the doorframes anymore, nobody puts anything up by the bridge when there’s a wedding, nobody makes żurek.”

In the translation, Croft could have embellished upon the text to make it more comprehensible to those unfamiliar with Polish culture and history by explaining references (using “sour rye soup” instead of żurek, for example, or providing the context for when and why a door would be decorated with pine), but chose instead to retain the unique inflections of Greg’s dreamy, meandering prose. The experience is akin to going on a backpacker’s expedition of a foreign country rather than a package tour: It’s a lot more work, sometimes disorienting, but ultimately a much richer and more satisfying experience.

Often, the author deliberately leaves the story murky, as when Wiola must leave the Vega. Exactly what happens is unclear — a police raid, a package that she must deliver — though the result is not. She is expelled from her Eden, where she was happy despite the squalid conditions and rough company.

From the underworld of the Vega, Wiola ascends to a rarefied attic room in the convent of the Congregation of the Sisters in Christ’s Heart. It is everything that the Vega is not. “In the warm, clean room, the roof creaks like a moored ship, the bedding smells like wind and starch, and the light green satin bedspread ripples like winter rye.”

But she soon becomes stifled by the cloistered world of the Sisters, finding them to be less kind and generous in their saintly piety than the big-hearted sinners of the Vega.

It is now “1995, a time or privatization, acquisitions, cable TV, securities, the issuing of bonds, companies, investment firms, pyramid schemes and predicting the end of the world.” Escaping the ennui of the convent, Wiola wanders city streets thronged with religious devotees and the drug dealers who cater to them, pondering the heavy weight of history:

“The city swells with the cacophony of guitars, harmonicas and drums, but beneath the surface rest layers of silence, pulse underground rivers, only barely making themselves known, as if the ground were a kind of forgetting.”

Like the passage into adulthood, Accommodations is an exhilarating, wondrous, occasionally befuddling journey of a young woman, a country, and a culture in transition, reckoning with a violence-torn past, pressing on ever hopeful toward the future.