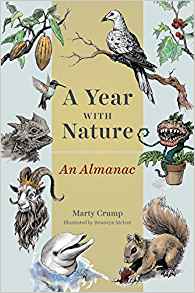 Scientists who can write for the layperson with both intelligence and intelligibility, with verve and wit and perhaps a bit of self-effacement, are to be treasured. Think late paleontologist Stephen Jay Gould, author of The Panda’s Thumb and many other works, and Bernd Heinrich, who is happily still with us and best described by the title of his newest book, A Naturalist at Large.

Marty Crump, another naturalist (specialty: herpetology), is not as prolific, but she can write ably for a general audience without dumbing down her subjects, as demonstrated in her 2005 Headless Males Make Great Lovers and other books. Her latest is A Year with Nature: An Almanac.

There are all kinds of nature almanacs, from the one you buy at the Safeway in December so you can plan when to plant the okra in the spring, to more literary ones. A good number concern the author’s own inner life as much or more than that of the mayfly or heron or mushroom spore — these are sort of one-year autobiographies.

Some of them have become classics of the environmental movement, such as Aldo Leopold’s A Sand County Almanac and the less well-known but enchanting 1935 An Almanac for Moderns by Donald Culross Peattie, whose writing drips with life’s juices.

In short, it is an elastic genre.

Crump’s almanac is, she says, “an eclectic assortment of topics and themes relating to our natural world, each appropriate for a specific calendar day.” She mixes nature with culture in quirky ways so that her trivial pursuits include, for example, her January 25th entry, a discussion of the composer Felix Mendelsohn and his beloved “Wedding March” (played at the wedding of Queen Victoria’s daughter, Princess Victoria, on that day in 1858).

That’s the subject of the first paragraph. The second concerns the prairie vole, a monogamous mammal (most mammals, like its cousin the meadow vole, aren’t), and why it’s monogamous — all of which works nicely when the reader looks back on the entry’s heading: “Vole: Anagram of Love.”

Granted, the point of Crump’s almanac is not rigid factual accuracy, but rather to entertain and to provide food for thought. And, for the most part, her three or four paragraphs for every day are good enough for her purposes. The book is shallow but broad — and there’s nothing wrong with that.

Roughly half of the entries are riffs on a theme of the day, as proclaimed by someone in the United States or elsewhere. If you thought there is a day (or week or month) for just about everything, congratulations — you’re right: National Stuffed Mushroom Day (2/4), Adopt-a-Rescued Rabbit Month (2/23), National Sugar Cookie Day (7/9) — along with more prosaic day-tributes to whooping cranes (5/28), rats (4/4), and catfish (6/25).

If Crump had stuck to writing bits of amusing trivia, her almanac — even lacking a central theme — would be fun, in the way of trivia games. The book’s daily entries do, though, have a propensity to end with some kind of preachy platitude that becomes tiresome around July or August.

“Regardless of religious convictions,” Crump intones on Mahavir Jayanti (“13th day of the waxing (rising) half of the Hindu month of Caigtra”; translation: sometime in April), “today is a good time for all of us to reaffirm our respect for life.”

And the reader is admonished not once, but twice (World Environment Day, 6/5, and Florida Reef Awareness Week, third week in July) to care for our planet, as if he or she had never had the thought to walk or bike instead of driving a car.

Then there’s the ironic entry for Cow Appreciation Day (second Friday of July), when Crump explains how the reader can celebrate either by abstaining from cow-originated products (such as soap, shampoo, or rawhide chews for Fido) or, strangely, by having a nice juicy steak.

But any such irritants are redeemed by Crump’s obvious regard for all earthly things, and by poignant entries such as the one for December 13th. On that day, in 2006, the Chinese river dolphin, the “Goddess of the Yangtze” and the incarnation of a wronged girl, whom local fishermen regarded as their goddess of protection, was, as a result of pollution and river traffic, declared extinct.

“What will they do,” Crump plaintively asks, “now that their goddess is gone?”