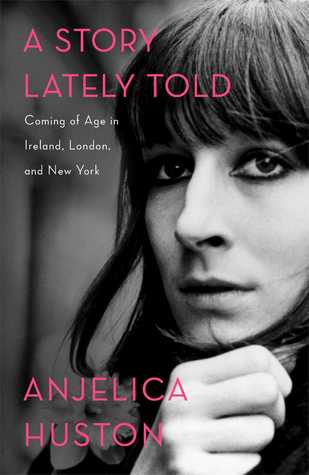 John Huston was not home the day his daughter was born. The famed director was in the Congo filming The African Queen with Humphrey Bogart and Katharine Hepburn. That oversight foreshadowed intermittent, careless parenting, which aroused daughterly melancholy and advanced tales of miscommunication. These pour out in Anjelica Huston’s memoir, A Story Lately Told: Coming of Age in Ireland, London, and New York:

“I was a lonely child. My brother Tony and I were never very close, neither as children nor as adults, but I was tightly bound to him. We were forced to be together because we were on our own …”

The siblings were reared on St. Clerans, a 110-acre estate in the Irish countryside, which they shared with myriad loyal and loving servants, horses, falcons, fish, and other wildlife. They were home-schooled, and far away from most kids.

Life was unpredictable and interrupted. John Huston — “a Lothario, a drinker, a gambler, a man’s man”—was on location for long periods; distracted at home, or not, by the mechanics of making his masterful movies: The Red Badge of Courage, Moulin Rouge, Moby Dick, The Misfits, Freud and The Bible. When John Huston was in residence, he sprawled, bombastically, in the “Big House” while his fourth wife, Ricki Soma, and their children, occupied the “Little House.”

But the beautiful Mrs. Huston — a former ballerina with a Mona Lisa face, who had vamped John Huston and adorned the cover of Life magazine in June 1947 — was uncomfortable there, 34 years younger than her husband, queasy about the security of the marriage and “out of her element,” according to their daughter’s memoir.

Yet, despite their partial mismatch, there were vestiges of spousal love, and occasional household warmth. The Hustons had, for example, elegant soirées at a variety of venues for people such as Carson McCullers, John Steinbeck, Irwin Shaw, Swifty Lazar, Deborah Kerr, Marlon Brando, and Peter O’Toole. Those events left residual happy memories for the author:

“It seems to me that of my father’s friends, the ones who were writers were more understanding, more interested, more engaged than the rest.”

Eventually, Huston’s habitual infidelity destabilized his wife; she left the estate for London in 1960, alone. A year later, Ricki and the children reunited in Kensington. The tutorial ritual was dropped; Tony was enrolled at the Westminster School, and Anjelica entered the French lycée:

“I found the curriculum impossible … All the classes were in French, with the exception of English literature and language. I was backward, the stupidest girl in the class. … At the end of my first year, my report card read ‘assez faible.’ There’s no perfect translation. ‘Rather weak’ doesn’t quite convey the French disdain …”

Huston was not a committed student then or later. She jettisoned academics in favor of days filled with shopping, clubbing and occasional rub-ups with cultural swingers like Fleetwood Mac and the Rolling Stones. She acted in her father’s film A Walk with Love and Death and posed for the illustrious fashion photographer Richard Avedon.

In the midst of this bustling life, the spurned Ricki planned a visit to Venice. But soon after her mother arrived in Italy, teenage Anjelica received news that Ricki had been killed in a car collision with a truck. The young jazz musician-boyfriend who was accompanying her and had been driving survived, and so did the truck driver.

Afterward, the churned-up 17-year-old Huston completed an understudy commitment with Marianne Faithfull in a 1969 rendition of Hamlet and hop-scotched into a romance with the much older fashion photographer, Bob Richardson, becoming his muse and protégé. Under his strategic mentoring and manipulation, she was recast as a successful model for British and Italian Vogue. When the couple relocated to New York, Huston segued into management mostly by Halston.

Meanwhile, the moods of the intermittently petulant Richardson morphed into misogynic mania. After four years, Huston terminated the liaison and departed for Hollywood.

The elegant and enjoyable A Story Lately Told concludes there. Adventures with Jack Nicholson, Warren Beatty, and others will be divulged in the actress’s second memoir. Watch Me is to be published in the fall of 2014.