Young Orson: The Years of Luck and Genius on the Path to Citizen Kane

A delightfully readable, masterfully researched biography about one of film's most notable names. 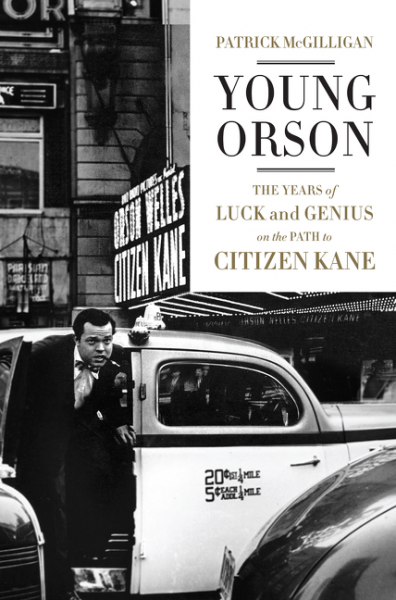 In his giant book about a cultural giant, Young Orson, author Patrick McGilligan provides an abundantly detailed examination into how a precocious youngster from Kenosha, Wisconsin, reached an improbable pinnacle of fame by the age of 25.

To understand the spectacular rise of young Orson Welles, McGilligan embeds his subject in concentric rings of several environments: his family, his town, his schooling, and even his country as it moved from the heights of prosperity, plummeted into the Depression, and then, eventually, rebounded.

He reveals the boy’s special opportunities and his readiness to seize them. Welles was a theatrical being from the beginning, a fellow whose voice, articulation, height, appearance, and quickness to learn what he needed to learn made him a large figure in the initially small arenas of his life — and he remained large as the arenas became more and more significant and filled with greater challenges. Welles always admired magicians, and in his own way he was one: an illusionist and escape artist. He could project himself greatly, take big risks, and usually get out of trouble.

His luck involved being educated at the Todd School for Boys in Woodstock, Illinois, where his genius was quickly recognized — just as it had been previously in Kenosha and Chicago. He arrived at Todd in 1926, and it was his principal home for five years, through 10th grade graduation. Under the forbearing tutelage of headmaster Roger Hill (one of Orson’s several surrogate fathers and later an important friend), he became an adept all-purpose “man of the theatre.” The busy theater schedule at Todd was astounding, and Orson was the heart and soul of it. He also edited and wrote for school publications.

Finishing high school? Going to college? Considered, of course, but a genius had better follow his genius, and his luck. Orson’s schooling including summer travels abroad — most importantly a sojourn in Ireland during 1931-1932 during which he painted (what couldn’t he do?) and hooked on with the Gate Theatre in Dublin. For teenager Welles, this was his college and perhaps also his graduate school. He became a professional.

McGilligan’s treatment of these stages in Orson’s development offers not mere chronologies, but carefully crafted explorations of places and times, replete with detailed character studies, what’s going on around the fast-developing tyro, and evocations of cultural ambiance.

When Welles returned to the U.S., he was quickly reunited with Roger Hill and given a job as drama coach for Todd School productions. However, as was so often the case throughout his meteoric career, he was also the designer of costumes and settings, the player of many parts, and the script editor. Seventeen-year-old Orson’s efforts led to a prestigious regional drama award for the Todd Troupers.

By now, the Great Depression was devastating the economy, particularly the always economically challenged fine and performing arts. For Welles, it was time to move to New York and join Actors’ Equity. He even tried to sell a dramatic script. Orson struggled, now more than ever dependent on the generosity of his other surrogate father (and guardian after Orson’s father died), Dr. Maurice Bernstein. As was always the case, the impressive young man managed to meet influential people at just the right time, make his impression, and demonstrate — like the Houdini he admired — his magic blend of genius and luck.

After an absence, Welles returned to New York. Now his letters of introduction to important people — and written by important people — begin to click. He became a part of Katherine Cornell’s repertory ensemble in 1933. Touring the U.S. with this company was Orson’s second coming-of-age experience as a man of the theater. His reviews were good — or good enough.

Like thousands of other actors, young and old, Welles paid his bills (when he paid them) from money earned in summer stock productions while sharpening his craft and his resumé. He continued to rise in Broadway circles, impressed big-name playwrights, and built a partnership with John Houseman that proved productive — and irritating — for several years.

Then, in the mid-1930s, came the Federal Theatre Project, the Negro Theatre Project, and all kinds of new opportunities for the ambitious wunderkind, who was a true notable before turning 20.

As the decade moved along, Welles had great success as a radio performer. If he didn’t invent radio theater, he certainly raised it to its highest level. His talents (as script doctor, producer, director, and performer) were fought over, and his income increased dramatically (no pun intended). It was probably radio, especially the “Mercury Theatre on the Air,” that first made Orson Welles a national figure.

As one would expect from having read to this point in his book, McGilligan offers astounding details on the performers, the production qualities, and the particular contributions of Welles and others to this significant series of radio drama. While the “War of the Worlds” broadcast added notoriety to Welles’s reputation, the overall series provided a well-received blend of popular and high culture dramas cast with actors of note.

The live theater version of Mercury Theatre was not as successful. But then when Hollywood called, Orson got himself ready and received an astonishing three-picture contract from RKO.

McGilligan details all the steps leading up to the actual filming of “Citizen Kane” (not released until 1941) and then brings down the curtain on the first 25 years in the life an American icon with a leap to his subject’s death 45 years later on Oct. 10, 1985.

This delightfully readable and masterfully researched biography is notable for its authoritative portraits of Welles’ friends and associates, especially screenwriter Herman J. Mankiewicz; his less than admirable life as a husband and father; and his multifaceted personality. Welles could be both generous and stingy in his praise for or crediting of his many collaborators. He could be both amazingly industrious and maddeningly irresponsible. He could act like a baby or like a mature statesman of the arts. Sometimes it seems as if he grew up too soon; at other times it seems as if he never grew up at all.

McGilligan brings all these puzzling inconsistencies to life with great precision and bravado, all against a vivid tapestry of the world Welles moved through and interpreted through his art.

The Pleasure Plan: One Woman’s Search for Sexual Healing

This honest account of a quest for pain-free intimacy pulls no punches.

The Drama of Celebrity

The cult of fame found an early goddess in Sarah Bernhardt.