A Hard Rain: America in the 1960s, Our Decade of Hope, Possibility, and Innocence Lost 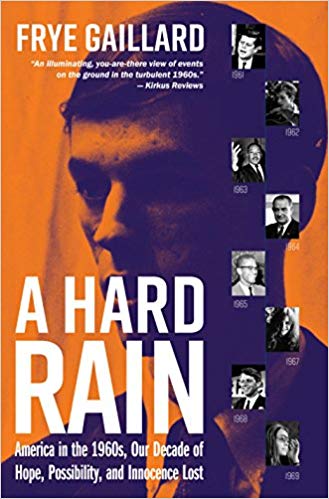 When I graduated from high school in 1968, I thought the nation was imploding. The promise of the early part of that decade, with the inspiration of a young president and a sense that exciting things were happening, gave way to frustration, anger, and even despair. The assassinations, escalation of the Vietnam War, and confrontations in the streets deeply affected Americans young and old.

Not surprisingly, there have been many accounts of the 60s, including those contemporary books which have become classics, such as Norman Mailer’s The Armies of the Night and modern post-mortems such as Tom Brokaw’s Boom!: Voices of the Sixties. Many others have focused on specific political, social, and economic aspects of the decade.

Frye Gaillard, a prolific writer with an impressive expertise in Southern history, has joined the cavalcade of writers who have profiled this era. And he has done a skillful job in melding together multiple themes — including politics, civil rights, social changes, and culture — to present a comprehensive account of this watershed period in modern American history.

The great strength of A Hard Rain is that the author deftly weaves together a narrative of people — some well-known and some less so — and their recollections. Information was gathered from extensive research, which is identified in a chapter-by-chapter bibliographical essay, and from interviews. Gaillard, himself a young activist at the time, interjects his reactions to various situations.

The chronicling of the ups and downs of the decade is comprehensive. The big developments are covered, but so are the backstories of some lesser-known events, such as the sit-ins at the F.W. Woolworth lunch counter at Greensboro, North Carolina, in 1960. In describing the movements of the student protesters, Gaillard gives the reader a sense of their motivation as well as the import of their actions.

Another example of an important but more obscure story is the brief account of how illustrator Charles Schulz came to integrate his “Peanuts” comic strip. Schulz was moved to create an African-American character by a thoughtful letter that he received from a mother in California who urged him to add black children to his popular cartoon series. In response to the pushback that came, the artist said, “Let’s put it this way: Either you print it just the way I draw it or I quit.  How’s that?”

The Vietnam War and the reaction to it is an important part of the book — as it was with the decade itself.  Since the book is largely arranged in chronological order, we see the war gradually taking a greater role in the life of the nation.

In the end, there is the disastrous Democratic National Convention of 1968, the driving from office of Lyndon Johnson, and the election of Richard Nixon. Gaillard quotes historian Todd Gitlin in commenting on the rise of violence and disenchantment as the decade dragged on: “Rage was becoming the common coin of American culture.”

Gaillard extensively discusses the rich music achievements of the 60s. In fact, music is a thread which moves the narrative along. After introducing Elvis Presley, he continues on to Bob Dylan, the Beach Boys, Janis Joplin, Johnny Cash, and, of course, Woodstock. He also reflects on the role of artists such as Norman Rockwell and various movie stars.

Hard Rain has a broad sweep. It is impressive that the author was able to treat so many topics and details while maintaining a highly readable story. Most of the issues raised have been examined by others in various histories and biographies, but the synthesis here is superb. For those seeking to revisit a formative time in their life, or for others looking for an introduction to a hinge point of history, this is a terrific book.

Joseph A. Esposito is the author of Dinner in Camelot: The Night America’s Greatest Scientists, Writers, and Scholars Partied at the Kennedy White House.