Beyond Snowden: Privacy, Mass Surveillance, and the Struggle to Reform the NSA

An expert — and laser-focused — discussion of electronic intelligence-gathering in the aftermath of an epic security breach. 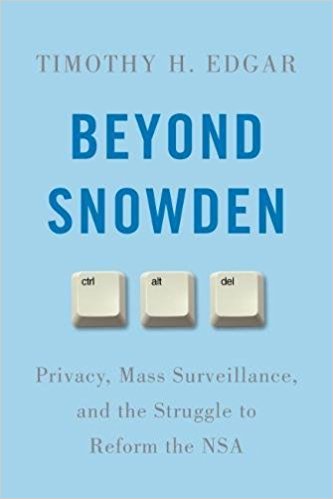 Author Timothy Edgar — prominent privacy advocate, former ACLU attorney, and Obama administration intelligence official — is well-positioned to know about matters of electronic intelligence collection. In Beyond Snowden, he documents the background and present state of the government’s practices regarding mass surveillance and individual privacy, and presents a reasoned realpolitik defense of mass collection in general, all the while acknowledging its potential for abuse.

But the author’s primary intent in this book is a detailed recounting of the worldwide (and U.S. Congressional) response to Edward Snowden’s 2013 revelations about the National Security Agency’s interception of email, telephone, and other electronic traffic passing over global networks. Edgar does this with even-handed accuracy and, along the way, comments expertly on the implications of the NSA’s bulk collection practices past and present, on both the domestic and overseas fronts.

But bear in mind: This book is at its base a formal report to the Brookings Institution about institutional practices and responses to the Snowden revelations. If you’re looking for more than an expert’s scholarly summary of the legislative, judicial, and academic aftermath of these disclosures, you might think twice about picking it up.

You won’t, for example, find any discussion of intentional (or even blundering) espionage here or, for that matter, much about our feckless young leaker, either. In the rare moments when Edgar focuses on Snowden at all, he comes across as a vaguely drawn, faceless cutout, his actions a bland premise for a collegiate debate contest (“Resolved, Edward Snowden’s release of classified information is ethically justifiable”).

As Edgar tells the tale, barely two months before Snowden makes off with (by later estimates) between 150,000 and 1.5 million classified files, the author has just resigned his post as White House privacy advocate and presidential advisor in favor of an academic position at Brown University. This puts him much in demand as an independent expert to testify before Congress and appear at international conferences to talk about the implications of federal intelligence gathering practices and of Snowden’s actions in exposing them.

In these activities and amid the global hoopla ensuing from the Snowden affair, Edgar finds his expository “hook” for explaining the fine points of electronic intelligence gathering. He does this remarkably well, affording a fair reading to the arguments of both government critics and the chorus of Snowden supporters worldwide. He also takes at face value the rationale Snowden himself offers for his actions, as conveyed to the public in the almost unanimously laudatory media coverage his revelations triggered in 2013.

As legal scholarship, Beyond Snowden is admirably comprehensive and, by all indications, accurate and balanced. Still, unless you’re a scholar or historian, you might find Edgar’s book a bit dense and academic (remember the Brookings connection?). But if this approach is your cup of tea, you’ll enjoy the author’s voluminous footnotes, and all readers are likely to welcome his helpful timeline and glossary, useful resources when the going gets tough, as it occasionally did for this reader.

In his brief final chapter, Edgar weighs the ethical and legal pros and cons of the case. On one hand, he asserts that, “as a result of Snowden’s choice, Obama’s second term was marked by the most significant reforms in surveillance that have been made since…the mid-seventies.” The latter is part of Edgar’s own reasoning behind signing an ACLU petition urging a pardon for Snowden.

Even so, by Edgar’s own account, the other side of the argument at the very least touches on questions of international relations: “[Snowden’s] presence in Moscow was a gift to Vladimir Putin, allowing the Russian leader to cynically pose as a defender of digital human rights.”

While some among us may suspect that Snowden’s “gift” to Putin likely extends far beyond the symbolism of his enforced sojourn in Russia, this dimension of the discussion clearly falls outside the scholarly boundaries that Edgar has set for himself.