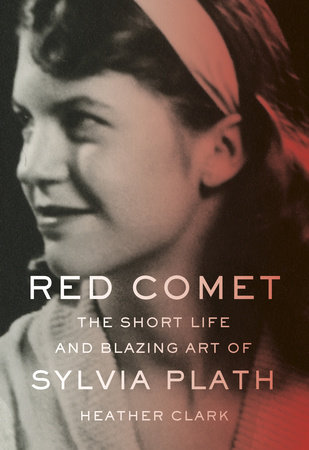 Sylvia Plath committed suicide in 1963, at age 30, by placing her head in an oven and turning on the gas. Her two young children slept upstairs in the London townhouse where W.B. Yeats had once lived but where their father, the poet Ted Hughes, no longer lived or even very often visited.

The ghastliness of Plath’s death, suggests professor and scholar Heather Clark in her meticulous, magisterial, and surprisingly engrossing new biography, Red Comet, has prompted too many critics to regard Plath as “cultural shorthand for female hysteria” and her poems as evidence of psychological or feminist pathology.

Clark — drawing upon previously untapped court and family papers, diaries, calendars, and caches of letters (including to the poet’s psychiatrist in Plath’s final months), as well as the long-restricted archives of Hughes — sets out to reimagine and reposition Plath as a first-class poet and a fully realized woman: gifted from childhood, both intensely industrious and passionately sensual, bravely ambitious in an era that undercut and ridiculed girls’ and women’s aspirations, disciplined, trailblazing, and the author of a few of the most enduring and original poems of the last century.

Deploying a series of new facts and deft character studies, Clark constructs a more nuanced view of Plath’s early life — her Germanic ancestry, the problematic marriage of her recent-immigrant parents, and her upwardly mobile childhood in idyllic Winthrop and then Wellesley, Massachusetts — than did earlier biographers.

Otto, Plath’s father, is depicted as mild and professorial (an entomologist, he studied the lives of honeybees), but preoccupied, aloof. Though Plath adored him as a young child, he died a slow, grim, silent death from untreated diabetes when she was 8; she later cast him as a Nazi villain in some of her most famous poems (including “Daddy”).

Her mother, Aurelia, often portrayed as an overambitious literary harpy, is here more often shown to be hardworking, self-sacrificing, and intermittently tormented by Plath’s increasingly extreme moods as she grew into womanhood. Plath’s painful and ultimately fatal perfectionism may have been smiled at by a proud Aurelia, but Clark makes it clear that neither parent caused it.

Plath had a terrifying mental breakdown in 1953, following her third year as a literary prodigy at Smith College and after a prestigious, high-pressure summer internship at Mademoiselle magazine in New York (described almost a decade later in The Bell Jar). A suicide attempt followed a series of crude electroshock treatments.

Plath’s lifelong patron, Olive Prouty, paid for a private hospitalization at McLean in Boston, which Clark’s thorough research shows to have been an almost gothic, pre-scientific, genteel house of horrors. There, Plath became permanently dependent on a psychiatrist named Beuscher — whom Clark characterizes as herself emotionally unstable and anti-Aurelia — and turned against her mother.

Clark doesn’t always make explicit the ways in which McLean changed Plath. The poet suffered — and deeply feared — the periods of depression that came in cycles for the rest of her life. Always a magnet for brilliant boys and men, back at Smith, she began to date feverishly. Plath had “a sexual hunger” and “a new embrace of life,” Clark writes, which continued at Newnham College, Cambridge, where she studied English on a Fulbright scholarship. There, she met fellow poet and rough-hewn Yorkshireman Ted Hughes. Equally ambitious and passionate, they were married within four months.

Among Clark’s many accomplishments in Red Comet (the title is taken from a poem called “Stings,” one of a sequence of “bee” poems Plath wrote late in 1962), she chronicles in gripping detail the fierce artistic, sexual, and even domestic partnership that was Plath’s marriage for its first four years.

In other biographies, wife or husband (usually wife) appears to be more or less the other’s victim. Here, their parity is uppermost and far ahead of its time. Plath and Hughes read, appraise, and improve each other’s every poem, promote each other’s successes, believe deeply in each other’s literary brilliance. The failings of each — the sexual restlessness and emergent cruelty of Hughes, Plath’s neediness and moods — play their part in Plath’s destruction. It makes for both balanced and compelling reading.

Plath began writing poems for publication when she was in grammar school. Except for the McLean period, she never stopped. If Clark’s superb book has a flaw, it is that the author recites more of Plath’s apprentice work than is necessary, and she may provide more details than readers want of Plath’s dozens of sometimes violent early love affairs and liaisons while not pausing to show us what scars they might have left.

Still, Heather Clark inarguably achieves what she set out to do: to “free Plath from the cultural baggage of the past 50 years and reposition her as one of the most important American writers of the 20th century.”