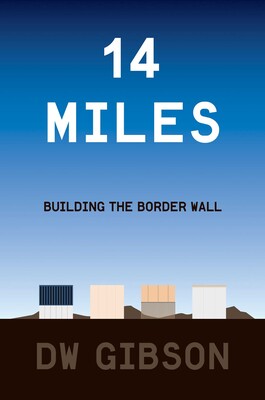 Before covid-19 travel restrictions closed the southern border to Central-American migrants fleeing persecution and to Mexicans seeking a better life, President Trump’s plan was to build a “big, beautiful wall” to keep them out.

Lost in the current 24/7 news cycle of all coronavirus, all the time is that the U.S. Army Corps of Engineers has been busy building away on that wall. It constructed a 14-mile steel barrier in the Southwest at a cost to American taxpayers — not Mexico — of $147 million.

The administration promises 400 miles of wall by the end of 2020. Eventually, the plan is to extend it the length of the country’s 1,954-mile southern border. Award-winning author DW Gibson, in his new book, 14 Miles: Building the Border Wall, follows a contest sponsored by the U.S. Department of Homeland Security in February 2017, which solicited prototypes for the future structure. Eight builders answered the call.

Gibson’s exhaustive work is worthy scholarship. He painstakingly chronicles the phases of the prototype-building and interviews scores of people who live and work along the border. While his heart is clearly with the undocumented immigrants desperate to enter the country, his journalist’s eye also focuses with precision on the contractors building the wall, the border agents patrolling it, and the politicians supporting it.

Gibson bookends his narrative by introducing readers to Aurelia Avila, a poverty-stricken Mexican woman he first observes sitting on a bucket in front of her home in Tijuana that lacks indoor plumbing, running water, or a solid roof. Her house is less than 200 feet from where the prototypes will be erected.

She hopes the winner of the contest will be one of the prettier models, given that she likely will be staring at it the rest of her life. But, if it turns out to be an ugly grey concrete barrier, she plans to “paint some little hearts” on it “so at least it looks pretty.”

But the real barrier for Avila is an ironic twist of fate — she is an American citizen, born in California to Mexican parents. Once her father was deported during her childhood, she and her mother followed him to Mexico. What keeps her out of the U.S. now is her inability to secure documents to prove her birthright citizenship. So her hardscrabble existence is spent collecting and selling discarded plastic bottles to support herself and her daughter.

The book is filled with poignant stories like Avila’s — unfortunately, for continuity, it is filled with too much detail about some of them. Rather than stick close to the wall, so to speak, Gibson meanders into the minutiae of the lives of those he meets along the way, sometimes confusing the reader and diluting the message of the greater meaning of the wall. By turning off the tape recorder a bit sooner with some of his subjects, he would have had a smoother narrative.

One example: Roque De La Fuente is the owner of 2,000 acres of undeveloped desert bordering on the land where the prototypes will go up. Fabulously wealthy, he ran a longshot independent campaign for president in 2016, and owns a real-estate enterprise, office parks, and extensive property in 25 cities.

The walls of his office are lined with photos of him shaking hands with such notables as Ronald Reagan, Bush 41 and 43, and Bill Clinton. Tight with the local sheriff, De La Fuente gave him the okay to arrest any wall-prototype protesters on his property. Gibson cleverly reveals De La Fuente’s true feelings about the politics of the wall, however, by quoting a few simple statements.

This says it all, but Gibson keeps going.

We learn that De La Fuente is feuding with his ex-wife over California community-property laws; that he cut his face shaving in the locker room of the Del Mar Country Club; and that he and his father sold land to the state for a prison and then dithered with the governor over where to put it. We also learn the details of some of his land purchases down to the dollar.

This is surely what is known in the jargon as TMI, and by the time the author returns to his theme, the reader is so bogged down in extraneous details that De La Fuente’s significance to the story is forgotten. He does this with other interview subjects as well.

Still, Gibson’s wanderings sometimes work. In the late 19th century, nothing but a few hundred obelisks, set three miles apart, separated the United States and Mexico, many of them surviving well into the 20th century. One such obelisk stood near what was once Friendship Park on a bluff overlooking the Pacific Ocean that borders the two countries.

The author tells us Pat Nixon was present at the dedication of the park in 1971, at which time there happened to be a bit of barbed wire stuck between a few stakes. That didn’t sit well with the Republican first lady. “I hate to see a fence anywhere,” she said before stepping onto the Mexican side of the park to shake hands. The image speaks volumes about our changing politics.

We also meet in 14 Miles Congressman Duncan Hunter, a San Diego Republican who filled a congressional seat held 30 years by his father, both of whom have been longtime champions of a border wall. Regardless of whether illegal immigrants are law-abiding citizens once they get here, Hunter the Younger wants no part of them.

In an interview with the author over a pint of beer, the congressman says:

Not long after his interview with Gibson, Hunter and his wife were indicted for conspiracy and violation of campaign-finance laws by using campaign money for private purposes. Hunter pleaded guilty, resigned from Congress, and, in March 2020, was sentenced to 11 months in prison.

In the end, none of the prototypes for the border wall was chosen, and all were demolished. Instead, the fence-building will proceed with a 20-foot-high steel design already in use. With the prototypes gone, Gibson returns to Tijuana to look for Aurelia Avila and get her thoughts about the process. But he cannot find her. Her house is closed up, and none of her neighbors can tell him where she has gone.

Diane Kiesel is a judge of the Supreme Court of New York. A former journalist, she is the author of Domestic Violence: Law Policy and Practice, published in 2017 by the Carolina Academic Press and She Can Bring Us Home: Dr. Dorothy Boulding Ferebee, Civil Rights Pioneer, published in 2015 by the University of Nebraska Press/Potomac Book imprint. She is currently at work on The Trials of Charlie Chaplin: How the Federal Government and One Woman Drove the Little Tramp from the United States, to be published by the University of Michigan Press.

By Ogi Ogas and Sai Gaddam

By Richard Thompson with Scott Timberg