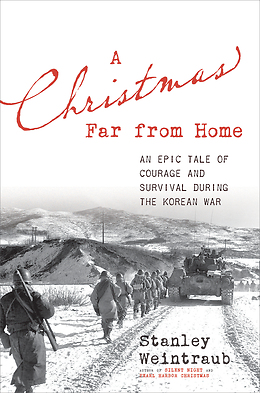 North Korea’s Chosin Reservoir, while hallowed ground and a touchstone for Marine Corps reverence, remains obscure to the general public. Less well-known and less-easily celebrated than Guadalcanal or Iwo Jima of World War II, even as a young military officer I only knew the name Chosin from chants sung during our morning formation runs.

The brutal fighting in the frozen hills around that manmade lake in late 1950 represented not victory, but a disaster narrowly avoided. As Americans, we prefer clean wins to complicated non-defeats, and so we move on to war movies with more obvious heroes; not for nothing the Korean conflict has earned the name “The Forgotten War.”

Despite arguing in the preface to A Christmas Far from Home that the Korean War doesn’t deserve this label, Stanley Weintraub nonetheless feels compelled to illuminate the basic facts of this chapter of American military history.

This is Weintraub’s sixth book about war at Christmastime, the previous five covering the Silent Night truce of 1914; General Sherman in Savannah in 1864; George Washington returning to Mount Vernon after the Revolutionary War; the Battle of the Bulge; and Pearl Harbor. In the current iteration, his need to take a swing at Korea is clearly personal.

Weintraub himself is a former Marine officer and veteran of the war, and he writes with the exasperation of a young lieutenant who has seen the misguided decisions of his superiors lead to devastation among common soldiers on the ground.

The book opens with President Truman and General MacArthur, Supreme Commander of the Far East (and thus commander of all NATO forces in Korea), meeting on Wake Island on October 15, 1950. MacArthur reports that the war is nearly won, later bragging that U.S. troops will be home by Christmas.

Both MacArthur and Truman were veterans of World War I, MacArthur as a decorated leader rising quickly to rank of brigadier general, Truman as a lowly captain in a National Guard artillery battery. The hierarchy switched, Truman was still deferential, as were all of MacArthur’s aides and advisors, to the point of ruin. The book ends only 10 weeks later, at Christmas, the war hero MacArthur’s cocky plans disintegrating in the face of Chinese reality.

MacArthur ordered a pincer movement, one force hugging the west coast of Korea, and another — the X Corps, a mix of Marines and U.S. Army — moving through the center of the country, the two thrusts meeting at the Yalu River that forms the border with China.

Both efforts were undermanned and would eventually be turned aside. The Chinese deployed a superior force of foot soldiers, lightly armed with tommy guns, potato-masher grenades, and small mortars they could carry on their backs, into the center of the pincer and swelled like a balloon, cutting off X Corps from the sea.

It was not a retreat. Weintraub stresses this point often, and in fact it could not be; as the Chinese had the Marines surrounded, they had no rear to retreat to. It was an audacious breakout, an assault south toward the relative safety of the warmer coast.

Weintraub tells this story in distinctive, dense prose, commiserating with the trials of common soldiers and lifting up generals on pedestals with the intention of knocking them down.

MacArthur and Major General Almond, the commander of X Corps, come off particularly badly, pampered and distant to the point of delusion, devoting more planning to the logistics of delivering Thanksgiving dinners than to the defeat of a Chinese army they refuse to believe is there at all.

When the commander of the 1st Marine Division, a unit within X Corps, reports the presence of Chinese soldiers, MacArthur’s intelligence staff calls it “a Marine lie.” As Weintraub writes, “The intelligence upon which MacArthur relied was largely his own ambitions.”

After Thanksgiving, as the snow and cold descended on the bare highlands surrounding the reservoir, the scene turned arctic, as if the war were teleported to a Shackleton expedition. More Chinese soldiers (dressed for a campaign against Chiang Kai-shek in the tropical south) died of exposure than from American bullets.

In one gruesome way, the fighting was almost bloodless; blasted-apart bodies froze before they could leak on the ground. Motors seized up as the temperature plunged to 20- and 30-below zero; no wonder David Halberstam titled his sweeping Korean War history, The Coldest Winter. But where Halberstam is both broad in scope and meticulous in detail, charting forces on familiar unit-on-unit maps, Weintraub’s view is narrow, more interested in the dissonance of the generals’ plans and the soldiers’ experience.

In the end, the only soldiers who made it home for Christmas were the wounded and the dead, and, as Weintraub notes, “There were always more dead.” Over 6,000 Americans ended up killed or missing; Chinese losses were many times that. One unit of 3,200 Marines had 2,815 casualties, a rate of 88 percent.

In the relentless advance south, the walking wounded and dead were pushed out of vehicles to make room for the crippled. Weintraub describes the recovery, transport, and burial of these men in at least as much detail as the combat itself, and the images are searing. Corpses frozen stiff and palletized, stacked like cord wood, strapped to the bumpers of jeeps and howitzer barrels, small planes flying sorties under fire to transport a few bodies at a time back to Japan.

During all this, the Army was perplexed by a Marine Corps culture that placed so much emphasis on the recovery of the dead. Why would Marines risk their lives to retrieve deceased comrades? In this haunting book, it is clear this process is far from done. Weintraub is liberating the sacrifices of the men from history’s dark corner.

Brian Castner is author of The Long Walk, an Amazon Best Book of 2012. Follow him on Twitter at @brian_castner.