How Jenny Lawson’s Broken helped me see the mountains of hope through the fog of depression. 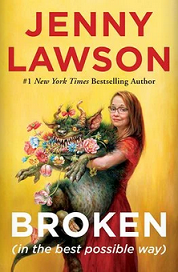 I read Jenny Lawson’s Broken (in the Best Possible Way) at a time when I was feeling significantly broken myself (and not, alas, in the best possible way). The winter is almost always a drab, difficult time for me, and the past two years of pandemic living have involved even more hibernation than usual.

Then, into the void of my daily life stepped Lawson. While I can’t remember why I first picked up Broken, I do know I immediately identified with Lawson, a fellow woman with mental and physical health concerns.

Her writing drew me in immediately. The chapter “An Open Letter to My Health Insurance Company” starts thus: “Sometimes I think you want me dead. But the truth isn’t so absolute. You just don’t care for me to live.”

I screamed in solidarity. Who among us has not wanted to write (and publish!) such a letter after a bureaucratic nightmare? Lawson’s ability to manifest her frustrations in such a heartfelt and hilarious manner made me feel less alone. She writes:

“Once, when I complained about your rejections (‘We’ve decided not to cover compounded medications anymore’), you told me that I should get on a better plan…I already am on your most expensive premium plan. You’d sent me a pen to thank me. I use it to write thousands of dollars of checks to pay for the things you ignore.”

The author’s hopelessness is palpable, but at least you’ll cry tears of laughter, too.

The thing about being broken, however we each define that term, is that it’s crushingly lonely. Lawson puts her best spin on it, reminding us of the Japanese practice of kintsugi, during which artists use gold lacquer to fix broken objects. This “treat[s] repair as part of the history, rather than disguising the breakage. The brokenness becomes part of the story and the beauty of the piece.” But there’s no denying that dealing with crippling depression or having to constantly allay anxiety can be not only exhausting but isolating.

This winter, when I didn’t have the energy to reach out to friends or, sometimes, even pick myself up off the couch, Lawson’s writing saved me. Although it hurt to see how similar our thought patterns, worries, and day-to-day struggles were, reading the book also reminded me that I am not alone.

That, in turn, has reminded me of the importance of keeping in touch with friends and family during these tough times. For me, feeling down is often a combination of anxiety and loneliness that tangos its way to hell while I stand by, horrified and helpless. Breaking that cycle has been rewarding and illuminating, and I have Lawson partly to thank.

In the chapter “Anxiety Is a Lost Watch I Never Saw,” Lawson recounts how, as a young girl, her grandmother borrowed a watch from a boy who liked her and then misplaced it. “She was sure that she’d have to marry him after that,” the author explains, “because how else do you make up for losing an expensive watch you could never replace?” (She eventually found it.) The ridiculousness yet utter relatability of this anecdote reminded me how absurd anxiety can be!

Nowadays, I’m doing a little better. The sun stays out longer, and it’s easier to come up for air, so to speak. But I will carry Lawson’s lessons going forward because they’ve been instrumental in making me feel less broken — and less alone.