How the story of a crusader helped put my own struggles in perspective. 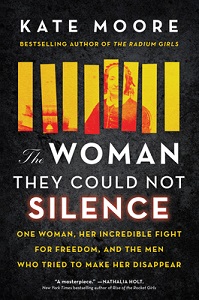 I’ve been thinking a lot about control lately. Mostly, this is because my therapist wants me to work on better adapting to unknown or uncomfortable situations — with the result being, of course, that all I can think about is control.

I want to let go and relax, but it’s hard not to approach relaxation the way I do everything else: on track, with a schedule. (Somehow, I don’t think the point of letting go is to grab on extra tight to a new obsession.)

Recently, I read a book by Kate Moore that helped me think about this dilemma in more practical terms. The Woman They Could Not Silence: One Woman, Her Incredible Fight for Freedom, and the Men Who Tried to Make Her Disappear tells of Elizabeth Packard, a housewife and mother of six coming into her own during a time of women’s burgeoning empowerment: the 1860s.

Although Elizabeth had married at 22 to please her father and originally treated 37-year-old Theophilus, her husband, with respect and submission, over the years, his behavior wrought changes in her. After he “confiscated her mail, refused her access to her own money, and even removed her from what he deemed the bad influence of her friends,” Elizabeth took the gospel of women’s rights to heart, arguing that she and her husband were equals who should treat each other accordingly.

As you might imagine, Theophilus didn’t take that well. He took it so badly, in fact, that his response was to have Elizabeth committed to an asylum; his word was enough to keep her locked away from her children and friends for years. She went from being the mistress of her own home to being a powerless patient deemed insane (despite, or because of, her frequent protestations of sanity).

In terms of losing control, it doesn’t get much worse than that.

But Elizabeth was undaunted. While housed with the less disruptive women, many of whom were as sane as she, she contrived to create a weekly prayer circle. During these meetings, Elizabeth used one of the few things she had access to — the Bible — to encourage the women and continue advocating for both their own freedom and the overarching freedom of all women. In this way, she brought comfort and solace to many who felt ignored and marginalized.

This ingenuity enraged the asylum’s director, Dr. McFarland. In retaliation, he transferred Elizabeth to Eighth Ward, where truly deranged and dangerous women were housed. Here, she was stripped of her privacy, abused by her so-called caretakers, and subjected to violence from her fellow inmates. It would have been enough to cow anyone.

Yet despite this significant setback, Elizabeth forged ahead. She developed a bathing schedule to keep the other women clean, reasoning that they, like everyone, deserved the courtesy of a good bath. She continued to express her opinions in writing she hid from her tormentors and that would eventually become a widely read treatise on women’s rights. And she never gave up hope of regaining her freedom.

It took Theophilus only a few minutes to sign away Elizabeth’s rights for more than three years; ironically, it took a jury just seven minutes to declare her sane during the trial she’d long advocated for. Elizabeth knew her peers would be better judges of her character than a bitter husband and a power-mad asylum director. The first step of her vindication was complete.

Elizabeth wasn’t finished, however. She still was barred from taking charge of the children she longed for, and estranged from her husband, she lacked the means to support herself. Using her ingenuity, she enacted an early crowdsourcing technique: By selling tickets that could be redeemed for her book once it was published, she funded the publication of her asylum writings.

She also was the driving force behind dozens of laws that were subsequently enacted, making it significantly more difficult to commit people without proof of their insanity. As the cherry on top of her vindication sundae, her children soon wrote to her expressing their desire to again live with her — a desire that was soon realized. Elizabeth Packard lived out her life having triumphed despite the most difficult of circumstances, becoming a role model for future generations.

The main lesson I took from Elizabeth’s extraordinary life story? Even in situations where everything seems beyond your control, it is possible to change your perspective — and even triumph! I hope to remember this whenever I feel helpless or uncertain: There is always something you can do, even if it’s just a small attitude adjustment.

Sometimes, that can make all the difference.

How a book about a neurotic woman helped me experience stress in more productive ways.