How a sweeping novel helped me understand the global refugee crisis. 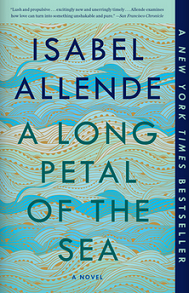 This is the second time in less than a year I’ve felt compelled by real-world events to write about refugees. First, the Taliban takeover of Afghanistan in summer 2021 produced a panicked exodus of people unwilling or unable to live under the ruthless regime, where women are barred from working freely and political opponents are terrorized in their homes. Now, just half a year later, Russia’s despicable invasion of Ukraine has created a new wave of displaced persons desperate for safety and heartbroken over the loss of their homes.

I chose Isabel Allende’s A Long Petal of the Sea as a lens through which to view these upheavals. The book chronicles one family’s journey into exile in Chile as a result of the Spanish Civil War, and then again from Chile to Venezuela during the rise of dictator Augusto Pinochet. This was also my entry point into Allende, a writer often recommended to me whose style appealed from the first page.

Confronted with any refugee crisis, I, like many others, feel particularly helpless. A sea of seemingly endless faces drawn with worry and tight with fear drifts on the tides of warfare toward an uncertain destination, and it’s difficult to know how best to help. By magnifying the struggles and triumphs of one family, Allende presents a digestible, intimate portrait of refugees.

Protagonist Victor Dalmau’s life has been defined by conflict since he worked as a young doctor alongside republicans during the Spanish Civil War and later escaped from dictator Francisco Franco’s forces to Chile with the help of Pablo Neruda. The famed poet orchestrates Dalmau’s immigration, and that of 2,200 others, via the SS Winnipeg (a historically accurate event that deserves greater attention for its sheer improbability). In old age, he must once again confront the specter of political persecution, fleeing his adopted homeland to escape ill-treatment as a friend of deposed President Salvador Allende.

The Afghan and Ukrainian refugees abruptly expelled from their homelands did not have Victor’s dubious luxury of a slow-moving displacement; instead, their circumstances have been so fluid, fast-paced, and confusing that it has been difficult even to get reliable information. All such cases, however, are connected by a sense of surreal horror at the hard-to-accept brutal reality.

During each of his banishments, Victor loses track of the people most important to him. Similarly, the story of the Afghan parents who handed their baby to a U.S. soldier during their evacuation in sheer desperation, only for him to go missing for months, must have sent a shudder through every parent who heard it.

There are similarly heartbreaking stories and photos of Ukrainian men sending their partners and children to safety and then — heroically, unbelievably — turning back toward their homeland to defend it (against a force with far-superior numbers and weapons). War not only creates unwilling expatriates; it rends families.

Between the time when I write this column and its publication, more than a full month will have elapsed — in the timeline of war, that’s an eternity. I know the words I’m writing might already be outdated by the time you read them, but I take comfort from one of Allende’s lessons about the passage of time.

The second time Victor is imprisoned in a concentration camp, his experience is nearly unendurable, but over the weeks and months, “He protected himself from the sadism and stupidity of his jailers by withdrawing into silent memories, certain only that Roser [his wife] was searching for him and would one day find him.”

Roser does, indeed, find and rescue Victor — one of the many supreme acts of love she commits during their marriage, originally one of convenience.

One can only hope that the Afghan and Ukrainian people — and all other refugees — will encounter similar acts of love during their forced exile from home. If you’re in a position to help, here is a list of top-rated charities providing relief in Ukraine, compiled by Charity Navigator, along with some more hands-on suggestions from Global Citizen.

Of course, no single act of selfless, radical love can end a war, but it certainly can alleviate a small part of the suffering. What more could you ask for?

The Composition of a Compilation

Defining our language helps define us.