Words Can Never Hurt Me 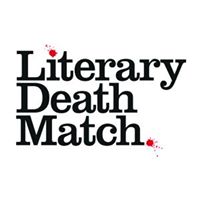 Literary Death Match, fortunately, did not deliver on its name. There was no blood, no extermination at the Washington, DC, event. Even the ego was gently handled. There was a competition, and elimination, but it was all in the name of self-promotion and selling books.

The premise: Two rounds of two authors read selections of their work. After each round, three judges critique the contestants according to literary merit, performance, and “intangibles,” choosing a winner. Then the two winners compete in a trivia quiz for the medal. The show runner, Adrian Todd Zuniga, looking like a snaggle-toothed Pee-wee Herman, fills in the empty spaces with fun facts about writers and their works (Carson McCullers’ favorite drink was the mint julep! T.S. Eliot was afraid of cows!).

To warm up for the main event, the audience watched a video of a Literary Death Match that took place in Los Angeles, replete with a real boxing ring and celebrity judges, including Susan Orlean and Keegan-Michael Key. It being L.A., the contestants knew a thing or two about acting and being on stage; one even showed up in boxing shorts and a warm-up robe.

Maybe they shouldn’t have played that video. Because this is DC. Our celebrity judges were a little less famous: Dan Kois, quaffing Diet Coke, a senior editor at Slate; the obligatory person from the Washington Post, Lisa Bonos; and Eric Schulze, a next-generation Bill Nye with a Tintin pompadour.

Still, writing talent isn’t location-specific, and the four contestants all displayed their considerable wordsmithing talents. Problem was, they were not all polished performers. So the first round, between Larry Doyle and Danielle Evans, titillated the audience, but due to a bit of mumbling by the former and a rushed delivery to get to the punch line of her story by the latter, the audience missed a lot of what was said.

Larry presented a humor piece called “Please Read Before Suing,” which included a list of symptoms that may occur when taking a colon-cleansing product, including bloating so bad you no longer have fingerprints; jazz hands; and vomiting in places other than your mouth. Danielle gave a preview of a short story still under construction that had something to do with a Confederate-flag bikini, race relations, Facebook, Twitter, and college dorms.

Because she used hashtags, made an emoticon face, and was wearing shoes that were either Sriracha red, had the Sriracha label on them, or just had Sriracha spilled on them (her shoes were not visible to the audience), Danielle won that round. There may have been other reasons, but they were lost in the blur of words.

Host Adrian appeared again to say that he thought it was all going by so fast. The metronome that set the beat, he continued to lob rapid-fire volleys of fun facts and anecdotes at us before introducing the next contestants.

The round-two readers were much more polished. Regie Cabico, a veteran of poetry slams who billed himself as a “spoken-word artist,” gave a virtuoso performance with a poem called “He’s Going to Fuck Him,” about trying to pick up a white man at a bar, only to find himself in competition with a non-white (Puerto Rican) rival (Regie is Filipino-American).

Calling himself a “brown swan,” he mixed up trenchant observations about race, sex, self-confidence, and Ariel the Little Mermaid, all with dramatic gestures, emotional inflections, and a well-paced, clear delivery. He was followed by Elizabeth Winder, who read a selection from her biography of Sylvia Plath in a measured cadence, every word sharp and clear, describing a field trip a 15-year-old Plath took to a prison.

Regie won that round, only to face Danielle in a game of Pictionary. Because the event was at the elegant Sixth & I Historic Synagogue, the theme was books by Jewish authors.

So, Danielle, the least good of the readers that night, was the one who took home the medal.

But who said life, or literary success, is fair? In the end, it was a win for all: The authors received publicity, the audience enjoyed an hour and a half of bookish entertainment, and Adrian Todd Zuniga was off to London for the eighth anniversary of LDM.

And from the talk in the audience as we drifted out, the bars of Penn Quarter were about to be flooded with word nerds, parched after an evening of good, clean fun.

Click here to see whether Literary Death Match plans to bring the fight to your area anytime soon.