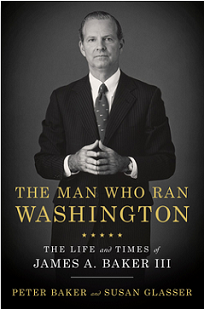 The idea began with Ronald Reagan and Edmund Morris. An American leader, confident of his life decisions and political record, and aspiring to preserve his legacy, connects with an eminent historian whose objectivity the leader trusts, and they make an informal handshake agreement to collaborate on a one-volume biography.

Under the terms of the deal, the protagonist opens up his memory, files, and personal network without gaining any editorial control or financial stake in the book. In exchange, the writer agrees to engage in thorough research, conduct dozens of interviews, and create an intellectually honest life story that reveals the leader’s strengths and weaknesses — though the book’s subject surely hopes for an affirming conclusion. Their shared goal is a bestselling book that will allow history buffs to gain a more deeply nuanced appreciation for the person whose face appears on its cover.

Alas, this collaborative approach got off to a rocky start when Morris admitted that during his years of attempting to dig into President Reagan’s inner psyche, he found only an impenetrable wall. In desperation, the author dealt with the situation by inserting himself into the book as a fictional character in an effort to make sense of what made our 40th president tick. The ploy didn’t work. The final product was the critically panned Dutch: A Memoir of Ronald Reagan.

Fortunately, since Dutch, the joint-venture approach to history writing described above has produced some highly regarded biographies, starting with Jon Meacham’s Destiny and Power: The American Odyssey of George Herbert Walker Bush; followed by Evan Thomas’ captivating First: Sandra Day O’Connor (with Justice O’Connor’s sons opening up her files and network due to her decline with dementia); and, now, with highly laudable results in The Man Who Ran Washington: The Life and Times of James A. Baker III, co-authored by New York Times White House correspondent Peter Baker and his New Yorker staff writer wife, Susan Glasser.

With stellar performances as Reagan’s White House chief of staff in his first term and treasury secretary during his second, followed by serving as President George H.W. Bush’s secretary of state, James Baker had a uniquely successful 12-year run in the nation’s capital, where the authors conclude he was “Washington’s indispensable man.”

Year after year in that era, Baker elevated himself above everyone else in the federal government with his uncanny ability to get things done by navigating White House turf battles, Congressional partisan divides, and cold and hot wars around the globe, gaining closure on highly challenging deals that advanced the greater good and had staying power in every instance. Doing this with dazzling frequency, Baker demonstrated a complete mastery of “the acquisition, exercise, and preservation of power,” and thereby became “the most important unelected official since World War II.”

Because Baker maintained a positive image throughout his political career — as supported by two memoirs which covered his many triumphs — until now, those seeking a textured “warts and all” understanding of exactly how he operated and what drove him to achieve as he did during his Washington years have searched in vain.

With Baker and Glasser’s new biography, the search now ends. Their book provides a complete, persuasive explanation of how this 45-year-old prominent but politically inexperienced Houston transactional lawyer arrived in the nation’s capital as undersecretary of commerce in July 1975, and within six months, began his meteoric rise to the peak of the DC power pyramid, marked by these achievements:

To gain this unprecedented number of Beltway belt notches could come only to someone with Baker’s exceptional grasp of the rare political art of knowing whom to befriend and whom to avoid; which battles to fight and which to resist; and what’s required to design and then execute a game plan that achieves victory in one’s chosen battles.

Despite all his accomplishments, one fact about Baker’s political career cannot be ignored: He never won an election. That’s not a problem for his legacy, however, because history has a special place for people who learn from their mistakes. Coming off the head-turning recognition that came with being dubbed Ford’s “Miracle Man” in the 1976 campaign, and not wanting to return to the private practice of law, Baker decided to throw his hat in the ring in the Texas attorney general race in 1978.

As that campaign played out, he soon realized that although his toolkit otherwise overflowed with political talents, he nonetheless lacked two critical skills for a successful retail politician: warming up to the daily drill of gladhanding the Great Unwashed, and inspiring crowds with eloquent, impassioned oratory.

Lesson learned. Once Baker saw that his political forte was not on the stump but in a backroom or at a conference table strategizing, brainstorming, arm-twisting, and, best of all, deal-making, he never ran for office again. Shortly after losing the Texas A.G. election, he accepted his best friend George H.W. Bush’s invitation to run his 1980 presidential campaign and took the next step on his political journey without looking back.

Bush’s defeat in the primaries, followed by Reagan’s victory over Jimmy Carter, shifted Baker’s influence into high gear. From that point forward, until January 1993, he kept himself in and around the Oval Office, knowing it was the most powerful place in the world for a political operator, congressional consensus-builder, and American diplomat to operate.

As the chief of staff charged with executing Reagan’s agenda, and with a boss who aspired to lead from nothing lower than 35,000 feet, Baker soon came to be recognized by Washington insiders as “the co-president,” persuading Reagan to accept tax increases (to stem the rising deficit) and remove American troops from Lebanon (to avoid another Vietnam quagmire).

Baker then led the charge to motivate congressional leaders to back the president on his decision to attack Grenada, reminding the world that, after Vietnam and Lebanon, the U.S. could still be a hot-blooded tiger (and was not a paper one) when the need arose and victory could be achieved.

To keep Reagan moving forward often required Baker to go mano-a-mano with the president’s colleagues on the far right who frequently (but unsuccessfully) feuded with the chief of staff for exerting what they saw as excessive control over his boss, thereby keeping “Reagan from being Reagan.”

Another critic distressed by Baker’s high level of influence over the president was Barbara Bush, who could see early on that her husband’s longtime tennis partner and former campaign manager had more power over Reagan (and, therefore, over the country) than did the vice president.

Baker and Glasser pull no punches in revealing their subject’s shortcomings. Throughout Baker’s political reign, his extreme ambition and tireless work ethic often caused him to be an absentee husband and father, which likely played a role in his children’s drug problems. His relentless competitive drive to win the battles he chose, while aspiring to be viewed publicly as a person of high integrity and above the fray, caused Nancy Reagan and sometimes even George H.W. Bush to see Baker as an expert at self-promotion and a terrific deflector of blame.

Bush 41’s self-contained ire over his best friend’s power-dominating ways surely was a factor in his purposely excluding Baker from two of the most important personnel decisions of his presidency — choosing Dan Quayle as his vice president and John Sununu as his chief of staff — both of which Bush later privately acknowledged to be mistakes.

For those who read history to learn lessons with practical application, the way the so-called “Velvet Hammer” went about the business of negotiations (sometimes across the table from Democrats and sometimes Soviets) “provides a master class in deal-making.” Rather than recite in this review all the particulars spelled out in the book of what made Baker a man among boys when it came time to get minds to meet on a viable agreement, here’s the co-authors’ tight summary:

“All horse-trading came down to was sniffing out what the many players needed to come to terms, a process that was Baker at his strongest. He was at heart a canny pol who knew Congress well, knew who could deliver, knew how to play them off each other enough to get them to give a little, and knew he needed to give enough himself so that everyone could come out of the negotiation feeling they had won.”

Adding a measure of dramatic tension to the book and fulfilling their “warts and all” responsibility under the collaborative biography agreement, Baker and Glasser detail their subject’s three major image challenges during his DC run that caused his otherwise gleaming reputation to sustain at least a little tarnish, though he was ultimately cleared of wrongdoing in each instance.

The episodes involved his briefly having possession of Jimmy Carter’s debate-preparation notebook before the only Carter-Reagan debate in 1980; his having allegedly made an antisemitic remark during an Oval Office meeting; and the fallout over whether Bush 41’s 1992 reelection campaign committee (led by Baker) facilitated the release of Bill Clinton’s passport file to the media.

Regarding the Carter debate notebook, when the story broke, Baker’s position was worsened due to statements made by his longtime adversary Bill Casey, which Baker vigorously denied. His alleged comment about Jewish voting tendencies was twisted and then passed onto the press by another Baker antagonist, Jack Kemp. And the federal investigation of the Clinton passport accusation started on the recommendation of Robert Mueller, then head of the Justice Department’s criminal division.

The damage done to Baker’s reputation by these three smears may well have cost him the Nobel Peace Prize, despite the fact that he was cleared in a 2,400-page Justice Department report that detailed its investigation of the Carter notebook claim; the remark leaked by Kemp was actually made about the voting tendencies of the American-Israel Public Affairs Committee, not all Jews; and, after a three-year investigation of the passport issue, independent counsel Joseph di Genova not only cleared Baker of any wrongdoing, but determined that the decision to pursue the inquiry into the matter had been “incompetent.”

In the big-picture analysis of his many highs and few lows, on balance, for Baker to have been constantly surrounded by alpha males (many of whom were jealous of his stature and sought to knock him off his pedestal by backstabbing him constantly) and to incur only three ill-founded character blemishes during his Washington years is the political equivalent of a major league hitter finishing 12 seasons with a .400 batting average in nine of them.

James Baker’s place in history should be enhanced by the way his life story withstood the scrutiny of Peter Baker and Susan Glasser’s investigative microscope. This biography partnership definitely achieves the parties’ objectives not only by producing a delicious read for lovers of history, but also by reminding the nation in 2020 that political power can be used to advance the national interest across party lines when it is wielded by a principled pragmatist whose primary purpose is to get things done.

[Editor’s note: Click here to get a signed copy of The Man Who Ran Washington or First: Sandra Day O’Connor during our fall fundraiser!]