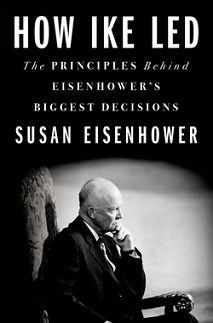 If the question is, “Who was the greatest American leader of the 20th century?” it would be hard for an intellectually honest person to answer with any name other than “Dwight David Eisenhower.” Yes, admirers of Theodore and Franklin Roosevelt can make a case for their being the premier political leaders of their eras, but Ike can match the Roosevelt cousins in politics and then raise them one with his military accomplishments as the victorious Supreme Allied Commander in World War II.

Eisenhower’s granddaughter Susan has had a long run as an esteemed political consultant, historian, and think-tank leader. Now in her late sixties, she decided the time was right to write the equivalent of a textbook on leadership, as personified by the career of her historic ancestor, in How Ike Led: The Principles Behind Eisenhower’s Biggest Decisions.

Harry Truman famously said that making sound assessments of leaders’ performance requires at least a half-century to pass because “it takes about 50 years for the dust to settle.” Ike died in 1969, meaning Ms. Eisenhower’s insightful new book has arrived at the appropriate time.

For a national leader to be acclaimed by historians on a long-term basis normally requires him or her to have confronted and successfully addressed more than one major crisis. From 1943-1961, Dwight Eisenhower faced and prevailed in defeating Hitler; in extricating American forces from an unwinnable war in Korea; in taking down Joseph McCarthy; in preventing nuclear holocaust in the Cold War; in resisting his Republican Party’s desire for isolationism; in avoiding U.S. intervention in small wars; in advancing Civil Rights by enforcing Brown v. Board of Education in Little Rock; in balancing the federal budget to the point of creating surpluses; in crossing the aisle and finding “the Middle Way” to achieve substantial bipartisan legislation; and in taming the Military-Industrial Complex to prevent the country from becoming a warfare state.

For Ike to have triumphed over these potentially catastrophic predicaments back-to-back-to-back required a shed full of leadership tools worthy of emulation in 2020. As detailed by Susan Eisenhower, among the noteworthy traits that fueled his successes are the following:

Though Eisenhower lacked the Roosevelts’ electric charisma that lit up the media or Kennedy and Reagan’s rhetorical eloquence, when comparing the positive traits and bona fide achievements among those on the short list of great American leaders since Lincoln, he stands at the top of the mountain in the crucial categories of command presence, mastery of strategy, and substance-over-form performance.

He would surely be pleased that 51 years after his death, his granddaughter has succeeded in connecting the dots to present a clear image of why his shrewd and successful handling of so many major national and international crises for the better part of two decades set the standard for best leadership practices in the modern era.