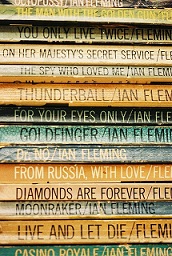 In my last column, after I finished whining about hurricanes, funerals, and the pain of moving, I listed many of the nonfiction books that survived the downsizing of my shelves.

I just reread that list, and it makes me sound like a politically correct college professor with the piles. The Complete Works of Shakespeare, indeed!

So, here’s a partial list of the fiction books that I have kept, which will hopefully prove that I am well-rounded (and not because of beer). Some of this may be repetitive. I’ve sung the praises of many of these authors and books in the past. But I just want to let you know what I consider too valuable to part with.

I’ve always been a big Ian Fleming fan, who was a much better wordsmith than he’s given credit for. I had a full set that dated from the 60s, but they, like moi, basically fell apart. So, I bought the newest paperback versions, most of which had snappy covers featuring scantily dressed “Bond Girls.” The books also contained some very minor typos that weren’t in my originals. I have no idea how that happened. I only mention it to prove that I reread the books and didn’t just buy them for the covers. (The old Playboy magazine defense!)

Of the Bond books, my three favorites are Dr. No, Live and Let Die, and On Her Majesty’s Secret Service. But all are worth reading, and if you are interested, start with the first, Casino Royale. Like most series, the last couple of books are not up to snuff, but Fleming never lost his stylistic chops, so don’t avoid them.

(By the way, I’m a big John Le Carré fan, whose gritty spy novels are considered the anti-Bond. I just read A Legacy of Spies, which got mixed reviews. It was terrific.)

There are far fewer of these Colin Dexter marvels than one might assume, since many people think all the Morse BBC television shows are based on novels. Nope. While the TV show is incredible in its own right (John Thaw was born to the part), only the first few episodes, such as “Last Bus to Woodstock,” mimic the real books (in this case, number 13). There are twice as many TV episodes, which capture Morse in all his idiosyncratic glory, and which became so popular that they attracted A-list British stage actors, such as Sir John Gielgud, to play what amounted to bit parts. Excellent as they are, one has to read the books to really know Morse. And, believe me, you will want to know him. So, start with Last Bus to Woodstock (nothing to do with Upstate New York) and work your way through them all. An interesting fact: Dexter died not long ago, but Morse predeceased him.

Robert B. Parker changed the face of his genre and made his private eye, Spenser, erudite, human, thuggish when necessary, and a great cook. He also gave him a steady squeeze, lots of sidekicks on both sides of the law (notably, Hawk), and a sense of justice that we all wish we had. My favorite: Looking for Rachel Wallace. But most of the 30-plus Spensers are good, and many are great. Start with the first, The Godwulf Manuscript. Spenser becomes like a member of the family after a while.

(An aside: Ace Atkins, a fine author in his own right [or write, I suppose], has been tapped by the Parker estate to keep the series going. I think his latest, Little White Lies, may be as good as some of the later Parker Spensers. High praise from me, a Spenser fanatic!)

John D. MacDonald’s unlicensed sleuth lives on a Fort Lauderdale houseboat (the Busted Flush, named after the poker hand that an opponent lost to McGee, which financed the boat). McGee makes his living salvaging lost fortunes and lost souls. MacDonald wrote 22 McGees in the 1960s, 70s, and 80s, and maybe twice that number of standalone novels, including such classics as Cape Fear. Many of his books deal with rapacious real-estate clods destroying Florida. (Take it from someone who lives here: Nothing has changed.) MacDonald’s prose is lyrical.

Heavy on the thrillers, I know. I do have many other novels in my collection, though I daresay that if I am forced to pare down again, they will go before the ones I just mentioned.

Read on, MacDuff! (Gee, maybe the Shakespeare wasn’t wasted on me! Even if it was actually “Lead on.”)

Lawrence De Maria, once a Pulitzer-nominated New York Times reporter, is closing in on his 18th thriller. One or two more gruesome murders, and it will be finished! His books, some now in print, are available at St. Austin’s Press (BOOKS BY DE MARIA).