Which books survived the Mass Culling of 2018? 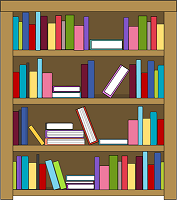 In my last column, I referenced the fact that my writerly output had been slowed of late by various travels caused, unfortunately, by long-distance funerals. Alas, things have not slowed up in that regard, and I am shortly off to the north again, where I understand it is colder than a witch’s typewriter.

Lacking as I am in warm-weather togs, and soon to be surrounded by various young grandchildren and their cousins (all also known as bags of viruses), I fully expect that my flu shot will have little efficacy.

In fact, I just saw a report on TV in which the talking head gleefully noted that the most-recent flu vaccine is only about 10 percent effective. To my pessimistic mind (in which every glass of bourbon is only half full), that means the other 90 percent of the viruses have canceled their ski trips and are waiting for me.

In that last column, I promised to list some of the books that I kept during our massive — and still ongoing — downsizing. I will devote this piece to my surviving nonfiction library.

(Speaking of libraries, Naples, FL, where I live, has a wonderful library system, with at least nine well-constructed branches that come in handy during hurricanes; my shelves also contain plenty of library tomes, in various stages of overdue fines.)

But some of the nonfiction books I still own are: