The Garden and the Telescope

Signs and symbols from Alice’s Adventures in Wonderland 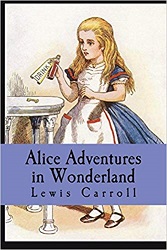 I’ll never forget the first philosophical sensation I ever had. It came in the mid-80s, while I was watching Disney’s animated “Alice in Wonderland.”

“Whoooo are yoooou?” puffed Caterpillar. I was 5 years old and intimidated by Caterpillar’s attitude toward Alice. His clipped responses (“I do NOT see” and “Explain yourself!”) made it clear he wasn’t offering any shortcuts on the chimeric path through this foreign culture called Wonderland.

There, beneath the tension and dread wrought by Caterpillar’s demand (Alice was only a little girl, after all, lost and alone in a strange place), I understood something: Caterpillar wasn’t asking for her name. He was setting a standard. He was, in essence, urging Alice to continue on her journey of inquiry.

In the movie, just as in the original 1865 story by Lewis Carroll entitled Alice’s Adventures in Wonderland, Alice’s awakening to the reality of other worlds comes before she meets Caterpillar, back when her curiosity first sends her tumbling down that rabbit hole.

The jar of orange marmalade she grabs for as she plummets is a cry for safety and familiarity (safety and familiarity being the anti-journeys), a shudder of regret for having followed White Rabbit into the unknown. Finding that jar as empty as the void into which she falls, Alice is left without recourse. Helpless in her descent, she redirects the expedition inward and undergoes an important shift in perception:

"After such a fall as this, I shall think nothing of tumbling down-stairs!...even if I fell off the top of my house!"

This psychological inroad to an expanding perspective must be what Carroll had in mind when he used the telescope as a simile for Alice’s physical growth in chapter two, the Pool of Tears. We find her “curiouser and curiouser,” nine feet tall, and chattering with ideas as she opens out like “the largest telescope.”

As a telescope, Alice has greater sight and sharpened focus, but the dancing new universe brought before her eyes is a troubling one because, as Caterpillar will soon imply, she doesn’t know who she is.

“Who in the world am I?” she preempts Caterpillar here while pondering if she’s been magically transformed into an Ada or a Mabel. In trying to recover who she used to be instead of who she is now, Alice stumbles over simple arithmetic and mixes up capital cities, but she never stops trying to piece the situation out, just as she never stops trying to get into that beautiful little garden, even after she shrinks down and nearly drowns in a pool of her own tears.

This brings us to what I think is the central equation of the story: Alice has to balance learning about herself with learning about Wonderland. The cautionary tales for what could become of her if she fails in her double mission are many.

Take the Queen of Hearts. What is she raging at? This guillotine-loving ruler knows the innermost workings of Wonderland, dominating on the croquet ground as well as in the courtroom. What she can’t grasp is her own internal terror over not facing what she’s about, which builds up inside her, then shoots out at subordinates like hot needles.

Against outward appearances, it’s the goodness represented in the “mistaken” white-rose tree that is the queen’s central symbol. When she demands red roses, she is denying the truth of herself, that she is, at heart, a benevolent ruler.

In Wonderland, only the queen’s temper is a more convincing disguise for her purity than the red paint used by the Playing Cards to hide those infamous white blooms. Proof positive: The Queen of Hearts is not actually murderous. As Gryphon tells Alice, she has never executed anyone.

In contrast, the Cheshire Cat is the self-knowing, smirking individualist. And like the guru on the mountain, he can inspire insight in Alice though he himself has no idols to look up to, as when the king tells the Cheshire Cat that he may kiss his hand, and the cat answers, “I’d rather not.”

The Cheshire Cat’s disappearing act is telling of his contemptuous and hermetic existence, as is Caterpillar’s hookah addiction. (What’s in that tube, anyway?) Both the Cheshire Cat and Caterpillar exude utter self-sufficiency, so much so that their enlightened separation from the rest of Wonderland is a solitary confinement from where they can do nothing but look out and observe.

For Alice’s part, her embarrassing gaffes — and their corresponding metaphor: losing and gaining size without knowing — are nevertheless cringeworthy evidence that she is open (remember her curiosity!) and courageous enough to struggle across the terrain.

As the story goes deeper, it’s Alice’s discomfort and frustration that force her to take control and learn to appropriately manipulate when she shrinks and when she grows. These voluntary changes in size are what alert us to Alice’s success in the dual quest for self-knowledge and world knowledge.

As in the tradition of Ecclesiastes, there is a time to go inward and a time to go outward; to trust personal judgment and to seek outside counsel; to follow and to lead. In other words, to become small and to grow large.

The key is in discerning which lever to pull and when to pull it, or, in Wonderland terms, which potion to drink. By getting this straight, poor Alice learns more about life in one strange afternoon than many an adult does in a lifetime.

Dorothy Reno is a senior editor and classic-books columnist for the Washington Independent Review of Books. If you would like to share your take on Alice’s Adventures in Wonderland, we’d love to hear from you in the comments section below. You can join Dorothy in reading The Little Prince which will be the subject of her next column at the end of October.