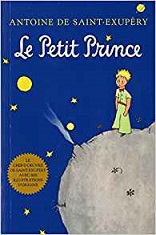 You can pick up any English translation of Le Petit Prince and experience, for the most part, a fable about learning to live well and love well. Assuming the various parables of the story are decoded, and the ending isn’t overly dwelt upon, you’re invited to cast an eye on a finely tuned and contented mock-up of the human maturation process: youthful idealism followed by dashed expectations; crisis, then self-illumination that gives way to humility; and, finally, the taking up of one’s small place in the world as a relational being.

Such an interpretation might go something like this: The little prince, whom the pilot encounters in the desert, is none other than that pilot’s child-self, the one who was so misunderstood at 6 years old, when his drawing of a snake digesting an elephant was mistaken for a hat.

Thus, we learn about the pilot’s life up to the point of his emergency landing in the Sahara. Not through a literal or realist exposition, but from an archetypal perspective of someone encountering earth’s mores for the first time: a tiny spaceperson.

A child, in other words, who shows up in the form of the little prince.

The little (pilot) prince’s disillusionment over the insecure and one-of-a-kind rose (which sprouts from his planet one day like an unexpected pregnancy) deepens after he leaves home and encounters other troubled types (the control-freak king, the narcissist, the drunk, the greedy businessman, the helpless lamplighter, the pedantic geographer), all of whom make for stale playmates and inadequate role models to the story’s diminutive seeker.

Despair is the prince’s turning point when he discovers that his rose, the one he thought was “unique in all the world,” is but a common flower. The prince’s eyes are drawn wide to the facts of a mundane existence: His flower is ordinary, and, thus, so is he. (“You shall judge yourself,” says the king in chapter 10.)

The prince, then, sees that he has been just as myopic as the seven compulsive careerists mentioned above, and this knowledge serves as an awakening. That’s why he meets the pilot, his adult self. The two are now ready for integration.

From here, you can continue reading with one eye and see the poignant advice that has been frequently heard yet unevenly applied: take leisurely walks toward springs; forge bonds slowly and learn to take pleasure in them, even when those bonds are short-lived, as in the prince’s relationship with the fox; have rests when needed; and create small rituals.

Most importantly, know that love is a series of completed actions for the good of another. The fox says it best when he tells the prince, “It is the time you have wasted for your rose that makes your rose so important.”

The rose is special, after all, if only to the little prince, who has earned the perspective of her personal uniqueness, to recall Voltaire, by putting in the time to cultivate his garden.

Now that the little prince has moved from transactional to dedicated, he can go home and love his rose selflessly. And when he falls in the sand after a snakebite, we can avoid discomfort and ambiguity by taking one of the possible metaphysical meanings: the prince hasn’t died, he’s been wholly and authentically absorbed back into the pilot, where he belonged all along. We readers can return to our lives with child-like wonder and a bolstered gratitude for small blessings.

I read the story this way, back when I encountered it in high-school French class, and I read it this way still. At least, part of me does. The culturally North American part of me, the therapeutic, pursuit-of-happiness component of my personality, the same one that would have me tracing hearts in the steam of fogged-up mirrors.

As with most complex works of literature, there is much ground to cover in Le Petit Prince, some of it fertile for humanistic and self-actualization perspectives, some of it stark as it grimaces across cold, broken glass.

If we return, again, to the first scene where the pilot, as a boy, sketches a snake digesting an elephant, we witness a child intuiting the steely, matter-of-fact cycles of nature. He wants to know if this unfiltered reality-check frightens adults, but those grown-ups, having had many years of repressing life’s venom, see something completely different when they look at the picture: They see benign civilization, in the form of a hat.

Thus, there’s more at stake than how a society tries to disremember the perils of nature. It’s equally the tension between different natures of people, too — adults and children, lamplighters and kings, hunters and hunted — wanting, at times, to enter one another’s understandings of the world and failing to do so.

In parallel to the pilot’s experience as a 6-year-old, the little prince struggles against nature every day, too, tolerating the demands of his petulant rose, tending to his volcanos least they erupt, and uprooting the “vicious” baobab saplings. Even the most satisfying and mutual relationship of the book (between the prince and the fox) comes somewhat painstakingly as a result of their having to “tame” one another.

It’s this same conflict of nature and natures that causes the pilot to stay away from people and live his life alone. Likewise, the little prince carries his grudge against adults deep into the story, up until the pilot relents from his overly grownup “matters of consequence” and presents the prince with a sheep. Sadly, the prince’s elation over his new pet is short-lived when he realizes the nature of his flower is at a cross-purpose to that of his sheep:

“The flowers have been growing thorns for millions of years. For millions of years sheep have been eating them just the same. And is it not a matter of consequence to try to understand why flowers go through so much trouble to grow thorns which are never of any use to them? Is the warfare between the sheep and the flowers not important?”

This passage may lack tension at first glance, but what happens if we substitute “flowers” and “sheep” for other, more meaningful figures who are dear to us? What other essential fears and conflicts do we hide under hats and behind garden screens?

And what, given this interpretation, is a reader to make of the prince’s snake-assisted suicide? “I cannot carry this body with me.” he tells the pilot, “It is too heavy.”

Comfort isn’t obvious in this particular reading, especially in light of the pilot’s last lines, which amount to a plea to the reader for consolation. The fox, however, tries to throw us a bone when he lets us in on a secret that hints at spiritual transcendence: “What is essential is invisible to the eye.”

“All men have the stars,” says the little prince. “For some, who are travelers, the stars are guides. For others, they are no more than little lights in the sky.”

Is this another battle of nature(s)? It is. But we should also take it as the author’s permission to read into his story what we can and will, even if that means carrying two or more opposing messages.

To sometimes peer with appreciation at golden rods and strain for the enchanted sounds of skyward laughter; at other times, to ponder whether the thorns of a proud rose have given any discomfort whatsoever to the sheep who has eaten her.

Dorothy Reno is a senior review editor and classic-books columnist for the Washington Independent Review of Books. If you would like to share your take on Le Petit Prince, we’d love to hear from you in the comments section below. You can join Dorothy in reading Anne of Green Gables, which will be the subject of her next column at the end of January.

The Harsh Lessons of “Frankenstein”