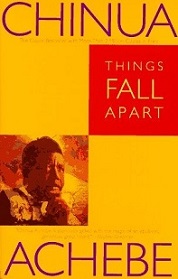 In a 1994 interview, Nigerian writer Chinua Achebe described how Igbo elders should be greeted. According to tradition, one should approach the elder, shake hands, and call him by his chosen, titled name. But, as Achebe explained, in the face of large assemblies, this is not practical. As a result, the customary greeting was distilled down to a catch-all that acknowledges everyone with a heartfelt one-liner.

Should you ever find yourself at an Igbo gathering, then, do not worry about shaking hands with each elder. Instead, look sincerely at the delegation and say, “To everybody his due.”

This notion — to everyone their due — is at work in Achebe’s first novel, the 1958 world classic Things Fall Apart. Here, a late-19th-century, pre-colonial Igbo village called Iguedo gets its due.

In the story, Iguedo is a brother village to eight others, which together make up the clan of Umuofia. Umuofia is patriarchal and run by a council of elders and titled men. It is a warring clan, a clan that raises livestock, a clan that heeds the imperatives of its oracles and lives in connection with the spirits of its founding ancestors.

Achebe famously spoke out against Joseph Conrad’s novella Heart of Darkness, a book he said portrayed another people, the Congolese, inhumanely. Reading about Achebe’s Umuofia in Things Fall Apart, one is struck by the correction, struck by the invitation to enter wholly into a culture that was never given its due by outsiders.

For Achebe, this recognition is awakened via the details of life circa 1890: The stirring tomp! of a community drum; men gulping palm wine from gourds; the thick aroma of yam foo-foo; an intoxicating whiff of cam wood glanced from the skin of a new bride; the quiet luster of a lone oil lamp orbing through the night. Meetings, weddings, funerals, and court sessions all delve into this society, with its intricate oral tradition, its mysticism, its penchant for wisdom-seeking.

At the center of the story is a successful Igbo warrior on the cusp of middle age named Okonkwo. We are told early on that Okonkwo garnered fame when he was 18 by winning a wrestling match against a legendary contender. The second thing we are told about Okonkwo is that he detests his father, Unoka, for being a failure.

Unoka is idle and untitled. He is afraid of war, borrows money, and loves nothing more than to play his flute. Unoka is also fair-minded, gentle, and kind — all qualities his son lacks. As Okonkwo cannot inherit anything from his father, he surrenders himself to a life of hard labor. When he is still a young man, Okonkwo borrows yam seeds from a rich farmer and begins his life as a sharecropper. Over the years, he becomes a prosperous farmer himself. He marries three women, has many children, and boasts two barns filled with yams.

But if giving due means acknowledging a person or character in the fullness of being, it should be said that Okonkwo has different sides, some of them quite troubling. He lacks respect for untitled men. He beats his second wife, Ekwefi. In fact, he nearly shoots her during the sacred Week of Peace, a time when all of Umuofia abstains from conflict and violence. The most painful episode occurs when Okonkwo participates in the mandatory ritual killing of his adopted son despite being instructed not to.

Though the other villagers never know Okonkwo’s true feelings about his transgressions, the reader sees his anguish. This makes him sympathetic, if not heroic. In his own volatile way, Okonkwo seeks the right balance among his competing drives: his fear of appearing weak, his ambition to gain more titles, his longing to be in harmony with the broader community. Okonkwo, in this sense, is a lot like most people in the world.

Things Fall Apart is the chronical of a tribal society’s collision with empire. It was the English, in this case, who came to install their religion and institutions for extractive purposes, and whose colonial dictatorship in what we now call Nigeria persisted for a century. Whatever Okonkwo’s personal trials and experiences, the reader understands they will give way to more profound calamities as the story progresses and the Europeans appear.

That Achebe gives due to those first English missionaries for razing a village, dividing Igbo society, and damaging local culture is a foregone conclusion. That he also gives due to their positive contributions is surprising and maybe even disruptive to our sense of history and justice.

Similarly, near the outset of the story, before the English seep in and while the reader is still enchanted by Igbo culture, Achebe drops in some less-palatable tribal practices. For instance, the disposing of newborn twins (considered bad luck) in the “Evil Forest.” Then there are the human sacrifices, the institutional slavery, and the oppression of anyone associated with the underclass, including twin-bearing women, lepers, untitled men, and people with swollen limbs, among others.

It is in the liberation of this underclass that the European missionaries and local Igbo converts get their due. They rescue twins from the forest and welcome the infirm and low-born into the church. It’s a strategy (or value) — depending on how you see it — that was also effective in colonizing the Indian subcontinent.

Achebe offers insights into societies’ critical pressure points by demonstrating how a culture can be transformed when outsiders use as their tools the most powerless from within that culture. That one person’s subjugation is another’s revolution is perhaps one of the book’s more doleful observations, though Achebe, an idealist at heart, wants us to keep our minds trained on the bigger picture.

In the interview mentioned at the beginning of this essay, Achebe expanded the concept of giving due, offering it as a philosophy. “Giving due,” he said, “Does not mean glorifying…The world is very complex, and we must be aware of that complexity. And not just be aware, but actually recognize it in the way we behave…You are not invited to admire or to love everything, but to recognize that each thing has validity.”

Achebe saw into the realm of nations, but he also knew what was crouching behind it: human psychology — a psychology still painfully young and slow to deepen. He perceived that a lack of recognition for “the other” results from too narrow a conception of one’s own identity, as in the case of Okonkwo as an individual, and also in the case of both the English and Igbo as societies.

And so, in response, Achebe leaves us with this regal checklist for getting ourselves together: complexity, awareness, acknowledgment, and behavior. It’s an ethos as challenging and worthwhile today as it was when his book was written.

Dorothy Reno’s long essay on the works of Viet Thanh Nguyen, “Lonely Ghosts: Absence as Somethingness in the Works of Viet Thanh Nguyen,” was published last September by the Hong Kong Review. She is also the co-creator of a visual companion piece to that essay, Lonely Ghosts: Absence and Somethingness - Dorothy Reno - YouTube. You can join her in reading The Great Gatsby, which will be the subject of her next column on October 3rd, 2022.