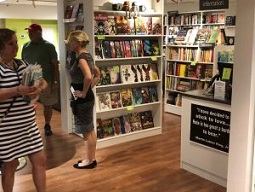 Recently, I conducted a quick tour of four newish bookstores in the Washington, DC, area. While Barnes & Noble’s retailing strategy in the area involves closing its stores in an agonizingly slow decline to full corporate disappearance, other book retailers are jumping into the market — a heartening development for those of us who scribble for a living.

All of the stores I visited had good foot traffic and rang up sales while I was there.

I started at Politics and Prose at Union Market (1270 5th St., NW), a formerly dodgy/industrial part of town. As a longtime devotee of the flagship P&P store on Connecticut Avenue, which has itself expanded in the last few years, I found the vibe at the branch pretty familiar. The store’s footprint is not huge, but its inventory was rather good, largely by making use of very TALL bookshelf units (nine shelves high), also pretty true at the flagship store. Stepstools were in evidence.

They showed me an overflow area where they stage events and can accommodate a fairly large group. Non-book merchandise is at a minimum, though they’re planning a cafe in other auxiliary space alongside the store.

Major plus: Of the stores I visited, P&P was the only one with a book of mine on the shelf (The Summer of 1787). Extremely charming. I commend the store highly.

Solid State Books (600 H St., NE) offered further evidence of the area’s gentrification. I spent a summer in an apartment not far away during the Nixon Administration (egad!). The store sits on a street that then was largely burnt out from the MLK assassination rioting of 1968.

Of the sites I visited, I liked Solid State’s space the best. They have a large footprint and have kept it quite open, which creates an accessible feel. I hope that in the coming months and years, they choose to insert more shelving so they can stock a wider inventory.

Also, of the indies I visited, only Solid State seemed to have the space to evolve into more than a neighborhood fixture (though parking was not easy on a Sunday morning). For now, the openness of the site allows events after they push back some bookcases.

East City Bookshop (645 Pennsylvania Ave., SE) is final confirmation that the eastern half of the city is a retail boom area. East City has been around a couple of years and has a well-established events calendar, which they accommodate by pushing around shelving in the lower level.

East City touts itself as Washington’s only woman-owned independent bookstore, though I can’t say I found that quality seemed to make much difference to the inventory and feel of the place. I should note that it was the only location where a store employee (or owner?) approached me first to offer assistance. After we spoke for a few minutes, she greeted other customers the same way. An excellent practice.

Then it was on to the 800-pound gorilla: the new Amazon retail store (7117 Arlington Rd., Bethesda). I have the mixed feelings about Amazon that most authors share. They have sold a boatload of my books, so it’s hard to be totally hostile. Bluntly, I need them too much for that.

But they know how much I need them, and mean to take advantage of it. Their hijinks in pricing and brutal tactics toward publishers (admittedly, not the most sympathetic victims) have been well documented. These days, I am flummoxed to explain why they keep replacing the click-through to my publishers’ new copies of my books in favor of links to used copies offered by third-party sellers.

Indeed, Amazon occasionally makes it hard to find an actual new copy of the books on their site. The practice screws authors (no royalties on used books) and publishers (no revenue on used books), and frustrates those consumers who actually want a new copy. So, they screw the author and publisher and customer. Why, exactly? Because they can?

The store in Bethesda is a pretty large space and was hopping when I was there. Lots of shoppers shuffled through, and the cash registers hummed. The inventory is very thin — almost all hot titles, based on sales through the website, and all volumes shelved facing out, rather than with spines showing. I found no staffers to chat with other than the clerks ringing up sales. The space has the charm of a vending machine and features lots of electronic devices for sale. There’s no event space.

If you’re an Amazon Prime member, you can get the online prices if you find a book you want. The store is better than the nothing we have had since losing the B&N on Bethesda Row. It did nothing to erase my nostalgia for that store.

David O. Stewart is the author of, among others, Madison’s Gift: Five Partnerships that Built America and The Lincoln Deception: A Novel. He is past president of the Independent and a member of its board of directors.