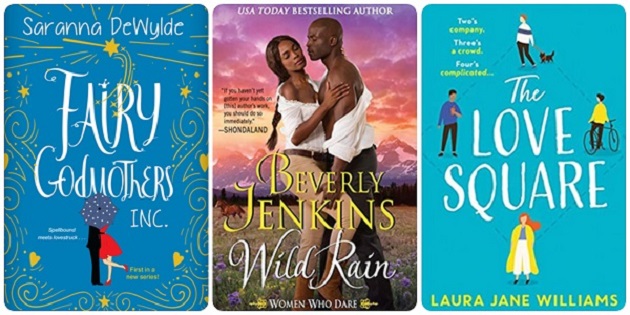 It’s February! I would say it’s the month for love, but romance readers know every month is a month for love. Here’s a trio of memorable romance novels I fell in love with recently.

Fairy Godmothers, Inc. (Zebra) by Saranna DeWylde is what you get when you mix magic and romance with plenty of whimsy and humor. It’s a pure delight!

Ever After, Missouri, is a small town filled with big fairytale magic. Lucky Fujiki is the antithesis of her name — bad luck seems to follow her wherever she goes, leaving chaos and disruption in its wake. But she might just be the key to the successful future of Ever After…

Enter three delightful fairy godmothers — Petunia, Bluebonnet, and Jonquil — who turn to Lucky for help in reenergizing Ever After’s fading magic. The problem is the magic in Ever After requires a steady influx of love, and there just isn’t enough to be found in town. The godmothers need a magical miracle!

The trio concocts a plan for Lucky to marry her ex-boyfriend and first love, wealthy chocolatier Ransom Payne. The highly publicized wedding is certain to turn Ever After into a popular destination-wedding spot, keeping love — and magic — in the air. Lucky and Ransom’s breakup was a humiliating affair, but could there be enough love left between them to turn a fake wedding into the real deal and generate their own happy-ever-after ending?

Paranormal romance is tricky to get right in terms of balancing both the magical elements and the love story, but DeWylde sticks the landing in this second-chance love story that charms from beginning to end. I’m very much looking forward to reading the next installment in this enchanting new series and revisiting this wonderful cast of characters!

After her 2020 contemporary romance, On the Corner of Hope and Main, Beverly Jenkins returns to historical romance with Wild Rain (Avon), a new book in her Women Who Dare series.

This time, Jenkins centers her story on Spring Lee, a Black woman rancher in Paradise, Wyoming. When Washington, DC, newspaper reporter Garrett McCray is thrown from his horse in the midst of a blizzard, it’s Spring who rescues him, albeit reluctantly.

Garrett has come to Paradise to interview Spring’s brother, Dr. Colton Lee, but his focus quickly shifts to the fiercely independent Spring, who has recovered from a painful past to build a life on her own terms. She has plenty of reasons to want to protect herself and isn’t sure there’s room — in her heart or on her ranch — for a man. Not even one as different and interesting as Garrett.

Spring knows how to break a wild horse, but falling in love is something she’s less certain about. Garrett admires Spring’s strong-willed independence — and he respects her, which goes a long way toward earning her trust. The emotional connection builds steadily between the two, with enough push and pull to see they are meant to be together, if only they can overcome the obstacles that threaten their happiness.

The Wyoming setting is a vivid backdrop to the budding romance, and there are some familiar characters to revisit, as well. True to form, Jenkins deftly navigates the complex history and inherent racism of the Reconstruction Era, weaving a believable, uplifting story of two strangers finding love and the happiness they deserve. Wild Rain continues a must-read series from one of romance fiction’s most beloved authors.

Penny Bridge owns a small café in North London and has created a reasonably happy life for herself, all things considered. Her father left the family after her mother was diagnosed with cancer, then her mother died when Penny was still quite young, leaving her to be raised by a beloved uncle. Penny has also had a five-year relationship end due to a cancer diagnosis of her own, so she doesn’t put a lot of faith in finding the kind of lasting love she craves.

Things change when she meets pastry chef Francesco Cipolla. Their brief, passionate relationship has promise, but things hit a rough patch when Penny believes she’s been betrayed. She’s called away to take over the family restaurant following her uncle’s heart attack and is forced to put her life on the back burner. But being away from her café offers her an opportunity to date two other men: Thomas, an old classmate, and Priyesh, the wine-seller for the restaurant.

Along with these potential new love interests, Francesco tries to heal their emotional and physical distance by planning a visit. Suddenly, Penny is drowning in male companionship and isn’t sure which way to turn. Whom she chooses and how she goes about building her family are delightful surprises in a book that is anything but traditional.

The madcap plot is threaded through with believable emotions, from Penny’s abandonment issues to the fear and grief she has experienced as a cancer patient. She forges ahead, surrounded by close friends and family who have her back, but she always longs for more. Williams does a good job of balancing the rollicking comedic scenes with brittle truths gleaned from Penny’s life, resulting in a satisfying story that leaves the reader smiling.

Kristina Wright lives in Virginia with her husband, their two sons, two dogs, a cat, and a parrot. She’s the digital editor of Your Teen for Parents magazine and a regular contributor at BookBub. She’s also the author of The Big Book of Infectious Disease Trivia. Find her on Twitter at @kristinawright or Bookshop, where she features other book recommendations.