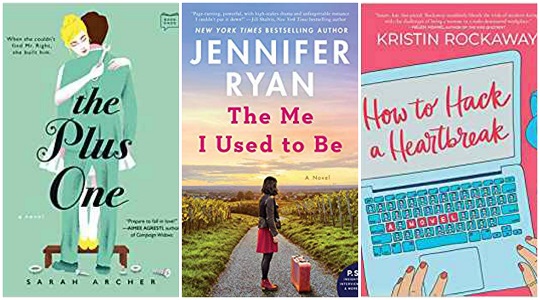 We’re in the dog days of summer — which I recently learned has nothing to do with the heat but was used by the ancient Greeks and Romans to refer to the position of Sirius (the dog star) in the sky — and I’ve been reading, reading, reading. And also playing with my own new puppy, a Goldendoodle named Barnaby. Maybe I should’ve named him Sirius?

This month’s selection of romance novels is short on dogs, but there’s plenty of love, passion, and at least one robot!

The robot in question is named Ethan, the perfect, gorgeous, always attentive robot in Sarah Archer’s The Plus One (Putnam). I’ll admit, the plot seemed a little “out there” for me, but I’m a sucker for romcoms and was willing to give this one a try. I’m glad I did.

Kelly Suttle is a 29-year-old robotics engineer in Silicon Valley. She’s brilliant but socially awkward and hasn’t had the best luck with love. With her younger sister’s wedding on the horizon and no date in sight, Kelly does what any smart woman with mad tech skills would — she adapts a robot to suit her needs.

Though his knowledge is provided by Google, and Kelly has tweaked him to her specifications, Ethan proves to be the perfect dream date. Introverted Kelly blossoms under the attention of her woman-made creation, which leads to all sorts of funny problems. Sure, Kelly has made Ethan the man she wants him to be, but it turns out that manufacturing a man and building a relationship are two different things.

Sarah Archer’s debut novel part is Frankenstein, part Pygmalion, and 100 percent charming. Despite the questions raised about technology and ethics, the premise is pure fantasy, and the end result is a breezy, funny beach read by a talented new author to watch.

Jennifer Ryan never fails to deliver an emotionally compelling story with well-developed characters, and The Me I Used to Be (William Morrow) is a fine example of the author’s considerable skill.

After serving time in prison for a crime she didn’t commit, Evangeline Austen is out on parole and facing a world that looks different than the one she left behind. Her father has recently died, and she’s been saddled with the responsibilities of her family’s failing ranch in Napa Valley.

Enter Chris Chambers, the police officer who arrested Evangeline. He was never convinced of her guilt, but he didn’t have the proof he needed to catch the true culprits. Chris makes a deal with Evangeline: In exchange for having her record expunged, she agrees to help him set up a sting to catch the real criminals, including her ex-boyfriend, Darren.

Evangeline’s homecoming has been far from welcoming, as her family blames her for their hardships and are concerned about her involvement with the police. Working with Chris offers a chance to clean the slate and start her life over — but in her quest for justice, she wasn’t expecting to fall in love. Her relationship with Chris blossoms even as Darren threatens their happiness and Evangeline’s future.

Jennifer Ryan skillfully crafts a believable romance that defies the odds, making The Me I Used to Be a powerful and heart-wrenching tale of love, redemption, and healing

Kristin Rockaway’s How to Hack a Heartbreak (Graydon House) is a charming, quirky romcom set in the world of tech start-ups and online dating.

Melanie Strickland’s life has been in a rut since she left college four years ago. She’s a programmer in New York City, but her talents are wasted working the help desk at a start-up called Hatch. She spends her time steeped in the sexism of the “Hatchlings” — the privileged bros who are supposedly brilliant entrepreneurs but can’t fix their own computers without her help. The money is good, and she gets to flirt with cute programmer Alex Hernandez, but Mel wants more in life.

Online dating hasn’t been any more rewarding than Mel’s soul-sapping job at Hatch. After a particularly bad experience on popular dating app Fluttr, Mel gets a genius idea. She creates a website called JerkAlert for women to report bad dating behavior, from sending unsolicited explicit photos to failing to show up for a date. It’s a way for women to warn each other and hold men accountable.

With the help of her fabulous friends, it doesn’t take long before Mel’s JerkAlert goes viral and Mel is dreaming of leaving Hatch in the rearview mirror and starting her own company. Meanwhile, she has begun a romance with nice-guy Alex, who has no idea she’s the brains behind JerkAlert. As their relationship develops, Mel realizes she has some difficult choices to make about her future.

How to Hack a Heartbreak tackles the issues of sexism and discrimination in the workplace while delivering a satisfying romance, some incredible female friendships, and a happily-ever-after ending. Kristin Rockaway has written a winner of a story that seems destined for the screen.

Kristina Wright lives in Virginia with her husband, their two sons, a dog, a new puppy, a cat, and a parrot. She’s the digital editor of Your Teen Magazine and a regular contributor to BookBub. Her work has appeared in a variety of publications, including the Washington Post, USA Today, Cosmopolitan, and more. Find her on Twitter at @kristinawright and tell her what you’re reading this summer!