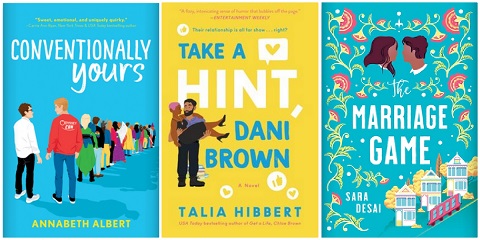 Thanks to covid-19, Independence Day is going to be a quiet affair at my house this year. We’ll grill out and make s’mores. There will be sparklers for the kids (oh, who am I kidding? I love them as much as my children do) and, for at least a few hours, I’ll be under an umbrella on my deck with a book in my hand. Here are a few of the romance novels that have kicked off my summer in style!

Annabeth Albert’s Conventionally Yours (Sourcebooks Casablanca) is a clever, heartfelt tale about two rivals who fall in love on their way to a big gaming convention in Las Vegas.

Conrad Stewart is the handsome, popular charmer who seemingly had the perfect life — until his family found out he was gay and disowned him. Alden Roth is the brilliant, socially awkward overachiever who will do whatever it takes to get his life back on track after his medical school dreams are dashed. When the two meet, it’s instant chemistry.

Conrad and Alden’s rivalry has been highly publicized on a gaming vlog about the (appropriately named) card game Odyssey. Now the two are headed to Sin City to compete in the Odyssey tournament, where they will go up against each other for the prize money they both need. The only problem is, they have to travel together.

The cross-country drive gives the two a chance to get to know each other and, like every good road-trip story, their adventures only bring them closer. There are humorous and poignant moments along the way as the frenemies fall in love, but the convention looms. How will they navigate their public rivalry now that emotions are involved?

Conrad and Alden are likable college-age men still discovering what it means to be adults and take charge of their own lives. Their story will appeal to both romance fans and YA readers looking for something tender, funny, and romantic. Conventionally Yours kicks off Albert’s promising True Colors series, and it’s the perfect geeky summer tale about two souls adrift finding each other in the most unlikely way.

The Marriage Game (Berkley) by Sara Desai is the kind of contemporary romantic comedy that’s reinventing the genre.

After she loses her job and breaks up with her boyfriend, recruitment consultant Layla Patel moves back home to San Francisco. But her father, who runs a Michelin-starred Indian restaurant, is determined to get his daughter’s life back on track. He offers her office space above the restaurant where she can start her new business. He also creates a profile on an Indian dating site so she can find a husband. Unfortunately, Layla isn’t privy to her father’s well-intentioned plans…
Sam Mehta is the CEO of a corporate-downsizing company looking for a new office — and a mix-up puts him and Layla in the same space. Between Layla’s boisterous family and various romantic suitors, the usually in-control Sam is suddenly having all sorts of feelings that don’t fit into his well-managed life. He agrees to serve as Layla’s chaperone on her blind dates, hoping that she’ll soon meet her match and move on. If she doesn’t…well, then Sam will be the one to vacate their too-close-for-comfort office.

Conflict gives way to chemistry as Sam and Layla’s attraction to each other grows with each bad date Layla goes on. Layla’s marriage game turns into a game of love, and it’s a pleasure to watch these two wonderful characters bond as they deal with the challenges of work and family. The secondary characters are also a treat, and there’s snark aplenty (and plenty of delicious food, too) in this winning debut. I can’t wait to see what Sara Desai has in store for us next!

Talia Hibbert’s wonderful Get a Life, Chloe Brown earned a place on my keeper shelf and made Hibbert an author to watch. Hibbert’s star continues to rise in the equally brilliant Take a Hint, Dani Brown (Avon), the second book in her Brown Sisters series. Here, a viral video brings two very different people together in a romcom that gives a fresh spin on the fake-relationship trope.

Ambitious workaholic Ph.D. student Danika Brown is focused on her academic career — and she has no time for romance. But when a sexy security guard rescues her during a fire drill gone hilariously wrong, she decides he might just be the guy she needs for a friends-with-benefits relationship.

Zafir Ansari is a former professional rugby player turned security guard who also runs a nonprofit sports charity for kids called Tackle It. He sees an opportunity to use his newfound social-media fame to help his children’s program. But he’s going to need Dani’s help to make it work.

Their public relationship blossoms into something else behind closed doors. In a twist, it’s Zaf who is the romantic at heart (he even reads romance novels!), and he wants to show Dani a different way of living — one that’s filled with fun and sex, yes, but also one that includes a work-life balance she has never known. Feelings blossom, and both Dani and Zaf grow as a result of their time together.

Like Hibbert’s previous Brown Sisters novel, the characters in Take a Hint, Dani Brown are real, fully developed, and affable. Dani is a pink-haired, bisexual force of nature, determined to live life on her own terms. Zaf is a gruff, handsome, well-muscled athlete who also happens to be a Muslim man who has experienced clinical depression. The connection between Dani and Zaf sizzles on the page, making you root for them to find their happy ever after. Hibbert doesn’t disappoint — in fact, she whets the reader’s appetite for the next book in this standout series!

Kristina Wright lives in Virginia with her husband, their two sons, two dogs, a cat, and a parrot. She’s the digital editor of Your Teen for Parents magazine and a regular contributor at BookBub. Her work has appeared in a variety of publications, including the Washington Post, Huffington Post, USA Today, and more. Find her on Twitter at @kristinawright or on Bookshop, where she features other book recommendations.