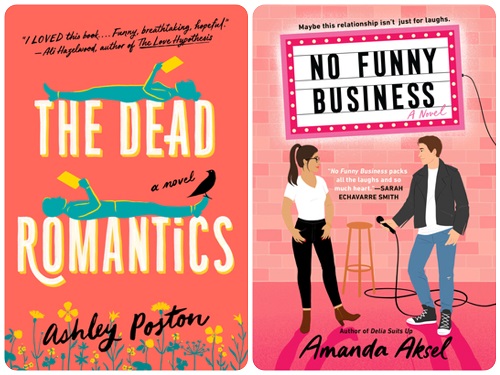 I’m not a fan of August. It’s hot. Unrelentingly hot. The excitement of summer has worn off, but autumn is still weeks away. I spend most of August just trying to stay cool and reading. Here are a couple of books I’ve really loved so far this month.

Florence Day is a ghostwriter for a well-known romance novelist. She’s been given several deadline extensions to finish the last book in her contract, but her new editor, Ben Andor, is adamant that the book is due ASAP. After this ultimatum is delivered, Florence learns her father has died and she needs to return to her hometown.

She has the peculiar ability to see ghosts, an unwanted gift that has caused more heartache than good (especially since her family owns a funeral parlor), but she’s hopeful that she’ll see her beloved dad one last time. Instead, she encounters the ghost of Ben, whom she’s only just met.

Newly dead Ben is confused by what’s happened to him, so it’s up to Florence to guide him through the process even while she’s coping with her own grief and planning her father’s funeral. Despite the grim circumstances, there’s abundant humor and heart as Florence and Ben get to know each other. Her job writing romance fiction aside, Florence has long ago given up on finding love, in part because of her unusual talent. But here’s the recently departed Ben, making her rethink her position. There’s no denying their chemistry, but what kind of future can they possibly have when he’s dead?

Thankfully, Poston’s clever plotting delivers a satisfying happy-ever-after ending for this unlikely pair. How Florence and Ben get there makes for a fun and memorable read.

I just finished watching the brilliant “Hacks” and couldn’t wait to read Amanda Aksel’s No Funny Business (Berkley). I’m so glad I did!

Olivia Vincent’s heart belongs to comedy. Unfortunately, she’s a lawyer — a practical career choice she pursued because of her father. When she loses her job after skipping out on a client to open for comic Nick Leto, she decides it’s time to focus on her comedy goals. She has an audition in Los Angeles for a late-night TV show and an invitation to tag along with Nick on a cross-country tour. The stars are aligning, but breaking into comedy is still a daunting prospect.

It turns out, life on the road isn’t glam; it’s staying in sketchy motels and performing in smoky dives. The further Olivia gets from her boring but stable old life, the more she questions whether she has what it takes to make it in comedy. Nick provides loads of support (as well as an endless stream of classic rock), and there’s plenty of laughs both on and off the stage as the pair bond over their shared adventure. There’s also some very real chemistry stirring between starry-eyed Olivia and been-there-done-that Nick, even if Olivia is determined there will be no “funny business” on the road to her dream.

Nick is a likable if jaded character who is a perfect match for Olivia. He has his share of baggage, but comedy is in his blood — just like it’s in Olivia’s. They understand each other in a way no one else can. Aksel infuses her story with lots of behind-the-scenes details that make No Funny Business a summer standout — or is that a stand-up? In either case, it’s a winner.

Kristina Wright lives in Virginia with her husband, their two sons, a dog, a cat, and a parrot. She’s a regular contributor at BookBub and a lifelong fan of romance fiction. Find her on Twitter at @kristinawright or on Bookshop, where she features other book recommendations.